Encyclopedia
7 Iris is a large main-belt asteroid. Among the S-type asteroid
S-type asteroid
S-type asteroids are of a stony composition, hence the name. Approximately 17% of asteroids are of this type, making it the second most common after the C-type.-Characteristics:...
s, it ranks fifth in geometric mean
Geometric mean
The geometric mean, in mathematics, is a type of mean or average, which indicates the central tendency or typical value of a set of numbers. It is similar to the arithmetic mean, except that the numbers are multiplied and then the nth root of the resulting product is taken.For instance, the...
diameter after Eunomia
15 Eunomia
15 Eunomia is a very large asteroid in the inner asteroid belt. It is the largest of the stony asteroids, and somewhere between the 8th-to-12th-largest main-belt asteroid overall...
, Juno
3 Juno
Juno , formal designation 3 Juno in the Minor Planet Center catalogue system, was the third asteroid to be discovered and is one of the larger main-belt asteroids, being one of the two largest stony asteroids, along with 15 Eunomia. Juno is estimated to contain 1% of the total mass of the asteroid...
, Amphitrite
29 Amphitrite
29 Amphitrite is one of the largest S-type asteroids, probably third in diameter after Eunomia and Juno, although Iris and Herculina are similar in size.-Discovery:...
and Herculina
532 Herculina
- Discovery :It was discovered on April 20, 1904, by Max Wolf in Heidelberg, and initially catalogued as 1904 NY. The origin of its name is not known; it may be named after the mythical Hercules, or after an unknown woman of that name...
.

Its bright surface and small distance from the Sun make Iris the fourth brightest object in the asteroid belt
Asteroid belt
The asteroid belt is the region of the Solar System located roughly between the orbits of the planets Mars and Jupiter. It is occupied by numerous irregularly shaped bodies called asteroids or minor planets...
after Vesta, Ceres, and Pallas. But at typical opposition
Opposition (astronomy)
In positional astronomy, two celestial bodies are said to be in opposition when they are on opposite sides of the sky, viewed from a given place . In particular, two planets are in opposition to each other when their ecliptic longitudes differ by 180°.The astronomical symbol for opposition is ☍...
s it marginally outshines the larger though darker Pallas
2 Pallas
Pallas, formally designated 2 Pallas, is the second asteroid to have been discovered , and one of the largest. It is estimated to constitute 7% of the mass of the asteroid belt, and its diameter of 530–565 km is comparable to, or slightly larger than, that of 4 Vesta. It is however 20%...
. It has a mean
Mean
In statistics, mean has two related meanings:* the arithmetic mean .* the expected value of a random variable, which is also called the population mean....
opposition magnitude
Apparent magnitude
The apparent magnitude of a celestial body is a measure of its brightness as seen by an observer on Earth, adjusted to the value it would have in the absence of the atmosphere...
of +7.8, comparable to that of Neptune, and can easily be seen with binoculars
Binoculars
Binoculars, field glasses or binocular telescopes are a pair of identical or mirror-symmetrical telescopes mounted side-by-side and aligned to point accurately in the same direction, allowing the viewer to use both eyes when viewing distant objects...
at most oppositions. At rare oppositions near perihelion Iris can reach a magnitude of +6.7 (next time on October 31st, 2017 reaching a magnitude of +6.9), which is as bright as Ceres ever gets; reports of it being seen without optical aid are unverified.

It was the seventh asteroid
Asteroid
Asteroids are a class of small Solar System bodies in orbit around the Sun. They have also been called planetoids, especially the larger ones...
discovered, on August 13, 1847, by J. R. Hind
John Russell Hind
John Russell Hind FRS was an English astronomer.- Life and work :John Russell Hind was born in 1823 in Nottingham, the son of lace manufacturer John Hind, and was educated at Nottingham High School...
from London
London
London is the capital city of :England and the :United Kingdom, the largest metropolitan area in the United Kingdom, and the largest urban zone in the European Union by most measures. Located on the River Thames, London has been a major settlement for two millennia, its history going back to its...
, UK
United Kingdom
The United Kingdom of Great Britain and Northern IrelandIn the United Kingdom and Dependencies, other languages have been officially recognised as legitimate autochthonous languages under the European Charter for Regional or Minority Languages...
. It was Hind's first asteroid discovery.

Iris was named after the rainbow
Rainbow
A rainbow is an optical and meteorological phenomenon that causes a spectrum of light to appear in the sky when the Sun shines on to droplets of moisture in the Earth's atmosphere. It takes the form of a multicoloured arc...
goddess Iris
Iris (mythology)
In Greek mythology, Iris is the personification of the rainbow and messenger of the gods. As the sun unites Earth and heaven, Iris links the gods to humanity...
of Greek mythology
Greek mythology
Greek mythology is the body of myths and legends belonging to the ancient Greeks, concerning their gods and heroes, the nature of the world, and the origins and significance of their own cult and ritual practices. They were a part of religion in ancient Greece...
, sister of the Harpies and messenger of the gods, especially Hera
Hera
Hera was the wife and one of three sisters of Zeus in the Olympian pantheon of Greek mythology and religion. Her chief function was as the goddess of women and marriage. Her counterpart in the religion of ancient Rome was Juno. The cow and the peacock were sacred to her...
. Her quality of attendant of Hera was particularly appropriate to the circumstances of discovery, as she was spotted following 3 Juno
3 Juno
Juno , formal designation 3 Juno in the Minor Planet Center catalogue system, was the third asteroid to be discovered and is one of the larger main-belt asteroids, being one of the two largest stony asteroids, along with 15 Eunomia. Juno is estimated to contain 1% of the total mass of the asteroid...
(Juno
Juno (mythology)
Juno is an ancient Roman goddess, the protector and special counselor of the state. She is a daughter of Saturn and sister of the chief god Jupiter and the mother of Mars and Vulcan. Juno also looked after the women of Rome. Her Greek equivalent is Hera...
is the Roman
Roman mythology
Roman mythology is the body of traditional stories pertaining to ancient Rome's legendary origins and religious system, as represented in the literature and visual arts of the Romans...
equivalent of Hera) by less than an hour of right ascension
Right ascension
Right ascension is the astronomical term for one of the two coordinates of a point on the celestial sphere when using the equatorial coordinate system. The other coordinate is the declination.-Explanation:...
.

Lightcurve analysis indicates a somewhat angular shape and that Iris' pole points towards ecliptic coordinates
Ecliptic coordinate system
The ecliptic coordinate system is a celestial coordinate system that uses the ecliptic for its fundamental plane. The ecliptic is the path that the sun appears to follow across the celestial sphere over the course of a year. It is also the intersection of the Earth's orbital plane and the celestial...
(β, λ) = (10°, 20°) with a 10° uncertainty. This gives an axial tilt
Axial tilt
In astronomy, axial tilt is the angle between an object's rotational axis, and a line perpendicular to its orbital plane...
of 85°, so that on almost a whole hemisphere of Iris, the sun does not set during summer, and does not rise during winter. On an airless body this gives rise to very large temperature differences. 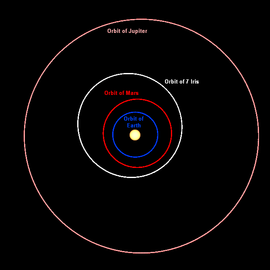 Iris was observed occulting
Occultation
An occultation is an event that occurs when one object is hidden by another object that passes between it and the observer. The word is used in astronomy . It can also refer to any situation wherein an object in the foreground blocks from view an object in the background...
a star
Star
A star is a massive, luminous sphere of plasma held together by gravity. At the end of its lifetime, a star can also contain a proportion of degenerate matter. The nearest star to Earth is the Sun, which is the source of most of the energy on Earth...
on May 26, 1995, and later on July 25, 1997. Both observations gave a diameter
Diameter
In geometry, a diameter of a circle is any straight line segment that passes through the center of the circle and whose endpoints are on the circle. The diameters are the longest chords of the circle...
of about 200 km.

Iris regularly comes within 0.4AU of Mars
Mars
Mars is the fourth planet from the Sun in the Solar System. The planet is named after the Roman god of war, Mars. It is often described as the "Red Planet", as the iron oxide prevalent on its surface gives it a reddish appearance...
and will next do so on November 2, 2054.