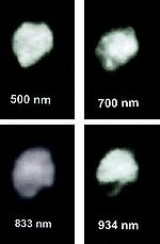 Encyclopedia
Juno formal designation 3 Juno in the Minor Planet Center
Minor Planet Center
The Minor Planet Center operates at the Smithsonian Astrophysical Observatory , which is part of the Center for Astrophysics along with the Harvard College Observatory ....
catalogue system, was the third asteroid
Asteroid
Asteroids are a class of small Solar System bodies in orbit around the Sun. They have also been called planetoids, especially the larger ones...
to be discovered and is one of the larger main-belt asteroids, being one of the two largest stony (S-type
S-type asteroid
S-type asteroids are of a stony composition, hence the name. Approximately 17% of asteroids are of this type, making it the second most common after the C-type.-Characteristics:...
) asteroids, along with 15 Eunomia
15 Eunomia
15 Eunomia is a very large asteroid in the inner asteroid belt. It is the largest of the stony asteroids, and somewhere between the 8th-to-12th-largest main-belt asteroid overall...
. Juno is estimated to contain 1% of the total mass of the asteroid belt. Juno was discovered on September 1, 1804, by German
Germany
Germany , officially the Federal Republic of Germany , is a federal parliamentary republic in Europe. The country consists of 16 states while the capital and largest city is Berlin. Germany covers an area of 357,021 km2 and has a largely temperate seasonal climate...
astronomer
Astronomer
An astronomer is a scientist who studies celestial bodies such as planets, stars and galaxies.Historically, astronomy was more concerned with the classification and description of phenomena in the sky, while astrophysics attempted to explain these phenomena and the differences between them using...
Karl L. Harding
Karl Ludwig Harding
Karl Ludwig Harding was a German astronomer notable for having discovered the asteroid 3 Juno.-Biography:...
and named after the mythological figure Juno
Juno (mythology)
Juno is an ancient Roman goddess, the protector and special counselor of the state. She is a daughter of Saturn and sister of the chief god Jupiter and the mother of Mars and Vulcan. Juno also looked after the women of Rome. Her Greek equivalent is Hera...
, the highest Roman goddess. Its planetary symbol, still occasionally seen, is (

Juno is one of the larger asteroids, perhaps tenth by size and containing approximately 1.0% the mass of the entire asteroid belt
Asteroid belt
The asteroid belt is the region of the Solar System located roughly between the orbits of the planets Mars and Jupiter. It is occupied by numerous irregularly shaped bodies called asteroids or minor planets...
. It is the second-most-massive S-type asteroid after 15 Eunomia. Though one of the most massive asteroids, Juno has only 3% the mass of Ceres.

Amongst S-type asteroids, Juno is unusually reflective, which may be indicative of distinct surface properties. This high albedo explains its relatively high apparent magnitude
Apparent magnitude
The apparent magnitude of a celestial body is a measure of its brightness as seen by an observer on Earth, adjusted to the value it would have in the absence of the atmosphere...
for a small object not near the inner edge of the asteroid belt. Juno can reach +7.5 at a favourable opposition, which is brighter than Neptune or Titan, and is the reason for it being discovered before the larger asteroids Hygiea
10 Hygiea
10 Hygiea is an asteroid located in the asteroid belt. With somewhat oblong diameters of 350–500 km, and a mass estimated to be 2.9% of the total mass of the belt, it is the fourth largest asteroid by volume and mass...
, Europa
52 Europa
52 Europa is one of the larger asteroids in the asteroid belt, having a diameter of 300 km. It was discovered on February 4, 1858, by Hermann Goldschmidt from his balcony in Paris...
, Davida
511 Davida
511 Davida is a large main-belt C-type asteroid. It was discovered by R. S. Dugan in 1903. It is one of the ten most massive asteroids. It is approximately 270–310 km in diameter and comprises an estimated 1.5% of the total mass of the asteroid belt...
, and Interamnia
704 Interamnia
704 Interamnia is a very large asteroid, with an estimated diameter of 350 kilometres. Its mean distance from the Sun is 3.067 . It was discovered on October 2, 1910 by Vincenzo Cerulli, and named after the Latin name for Teramo, Italy, where Cerulli worked...
. At most oppositions, however, Juno only reaches a magnitude of around +8.7—only just visible with binoculars
Binoculars
Binoculars, field glasses or binocular telescopes are a pair of identical or mirror-symmetrical telescopes mounted side-by-side and aligned to point accurately in the same direction, allowing the viewer to use both eyes when viewing distant objects...
—and at smaller elongations a 3 inches (76.2 mm) telescope
Telescope
A telescope is an instrument that aids in the observation of remote objects by collecting electromagnetic radiation . The first known practical telescopes were invented in the Netherlands at the beginning of the 1600s , using glass lenses...
will be required to resolve it. It is the main body in the Juno family.

Juno was originally considered a planet, along with 1 Ceres, 2 Pallas
2 Pallas
Pallas, formally designated 2 Pallas, is the second asteroid to have been discovered , and one of the largest. It is estimated to constitute 7% of the mass of the asteroid belt, and its diameter of 530–565 km is comparable to, or slightly larger than, that of 4 Vesta. It is however 20%...
, and 4 Vesta
4 Vesta
Vesta, formally designated 4 Vesta, is one of the largest asteroids, with a mean diameter of about . It was discovered by Heinrich Wilhelm Olbers on March 29, 1807, and is named after the Roman virgin goddess of home and hearth, Vesta....
. In 1811, Schröter estimated Juno to be as large as 2290 km in diameter. All four were re-classified as asteroids as additional asteroids were discovered. Juno's small size and irregular shape preclude it from being designated a dwarf planet
Dwarf planet
A dwarf planet, as defined by the International Astronomical Union , is a celestial body orbiting the Sun that is massive enough to be spherical as a result of its own gravity but has not cleared its neighboring region of planetesimals and is not a satellite...
.

Juno orbits at a slightly closer mean distance to the Sun
Sun
The Sun is the star at the center of the Solar System. It is almost perfectly spherical and consists of hot plasma interwoven with magnetic fields...
than Ceres or Pallas. Its orbit is moderately inclined at around 12° to the ecliptic
Ecliptic
The ecliptic is the plane of the earth's orbit around the sun. In more accurate terms, it is the intersection of the celestial sphere with the ecliptic plane, which is the geometric plane containing the mean orbit of the Earth around the Sun...
, but has an extreme eccentricity
Orbital eccentricity
The orbital eccentricity of an astronomical body is the amount by which its orbit deviates from a perfect circle, where 0 is perfectly circular, and 1.0 is a parabola, and no longer a closed orbit...
, greater than that of Pluto
Pluto
Pluto, formal designation 134340 Pluto, is the second-most-massive known dwarf planet in the Solar System and the tenth-most-massive body observed directly orbiting the Sun...
. This high eccentricity brings Juno closer to the Sun at perihelion than Vesta and further out at aphelion than Ceres. Juno had the most eccentric orbit of any known body until 33 Polyhymnia
33 Polyhymnia
33 Polyhymnia is a main belt asteroid.It was discovered by J. Chacornac on October 28, 1854 and named after Polyhymnia, the Greek Muse of sacred hymns....
was discovered in 1854, and of asteroids over 200 km in diameter only 324 Bamberga
324 Bamberga
324 Bamberga is one of the largest asteroids in the asteroid belt. It was discovered by Johann Palisa on February 25, 1892 in Vienna, making it one of the last large asteroids discovered...
has a more eccentric orbit.

Juno rotates in a prograde direction with an axial tilt
Axial tilt
In astronomy, axial tilt is the angle between an object's rotational axis, and a line perpendicular to its orbital plane...
of approximately 50°. The maximum temperature on the surface, directly facing the Sun, was measured at about 293 K
Kelvin
The kelvin is a unit of measurement for temperature. It is one of the seven base units in the International System of Units and is assigned the unit symbol K. The Kelvin scale is an absolute, thermodynamic temperature scale using as its null point absolute zero, the temperature at which all...
on October 2, 2001. Taking into account the heliocentric distance at the time, this gives an estimated maximum temperature of 301 K (+28 °C) at perihelion.

Spectroscopic studies of the Junonian surface permit the conclusion that Juno could be the progenitor of chondrite
Chondrite
Chondrites are stony meteorites that have not been modified due to melting or differentiation of the parent body. They formed when various types of dust and small grains that were present in the early solar system accreted to form primitive asteroids...
s, a common type of stony meteorite composed of iron-bearing silicate
Silicate
A silicate is a compound containing a silicon bearing anion. The great majority of silicates are oxides, but hexafluorosilicate and other anions are also included. This article focuses mainly on the Si-O anions. Silicates comprise the majority of the earth's crust, as well as the other...
s such as olivine
Olivine
The mineral olivine is a magnesium iron silicate with the formula 2SiO4. It is a common mineral in the Earth's subsurface but weathers quickly on the surface....
and pyroxene
Pyroxene
The pyroxenes are a group of important rock-forming inosilicate minerals found in many igneous and metamorphic rocks. They share a common structure consisting of single chains of silica tetrahedra and they crystallize in the monoclinic and orthorhombic systems...
. Infrared images reveal that Juno possesses an approximately 100 km-wide crater or ejecta feature, the result of a geologically young impact.

Juno was the first asteroid for which an occultation
Occultation
An occultation is an event that occurs when one object is hidden by another object that passes between it and the observer. The word is used in astronomy . It can also refer to any situation wherein an object in the foreground blocks from view an object in the background...
was observed. It passed in front of a dim star
Star
A star is a massive, luminous sphere of plasma held together by gravity. At the end of its lifetime, a star can also contain a proportion of degenerate matter. The nearest star to Earth is the Sun, which is the source of most of the energy on Earth...
(SAO 112328) on February 19, 1958. Since then, several occultations by Juno have been observed, the most fruitful being on December 11, 1979, which was registered by 18 observers.

Radio signals from spacecraft in orbit around Mars
Mars
Mars is the fourth planet from the Sun in the Solar System. The planet is named after the Roman god of war, Mars. It is often described as the "Red Planet", as the iron oxide prevalent on its surface gives it a reddish appearance...
and on its surface have been used to estimate the mass of Juno from the tiny perturbations induced by it onto the motion of Mars. Juno's orbit
Orbit
In physics, an orbit is the gravitationally curved path of an object around a point in space, for example the orbit of a planet around the center of a star system, such as the Solar System...
appears to have changed slightly around 1839, very likely due to perturbations from a passing asteroid, whose identity has not been determined. An alternate but less likely explanation is an impact by a sizeable body.

In 1996, Juno was imaged by the Hooker Telescope at Mount Wilson Observatory
Mount Wilson Observatory
The Mount Wilson Observatory is an astronomical observatory in Los Angeles County, California, United States. The MWO is located on Mount Wilson, a 5,715 foot peak in the San Gabriel Mountains near Pasadena, northeast of Los Angeles...
at visible and near-IR wavelengths, using adaptive optics
Adaptive optics
Adaptive optics is a technology used to improve the performance of optical systems by reducing the effect of wavefront distortions. It is used in astronomical telescopes and laser communication systems to remove the effects of atmospheric distortion, and in retinal imaging systems to reduce the...
. The images spanned a whole rotation period and revealed an irregular shape and a dark albedo feature, interpreted as a fresh impact site.