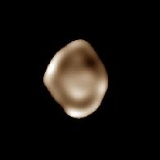 Encyclopedia
511 Davida is a large main-belt
Asteroid belt
The asteroid belt is the region of the Solar System located roughly between the orbits of the planets Mars and Jupiter. It is occupied by numerous irregularly shaped bodies called asteroids or minor planets...
C-type asteroid
Asteroid
Asteroids are a class of small Solar System bodies in orbit around the Sun. They have also been called planetoids, especially the larger ones...
. It was discovered by R. S. Dugan
Raymond Smith Dugan
Raymond Smith Dugan was an American astronomer and a graduate of Amherst College in Massachusetts .Dugan obtained his Masters Degree from Amherst College in 1902, and then received his Ph.D...
in 1903. It is one of the ten most massive asteroids. It is approximately 270–310 km in diameter and comprises an estimated 1.5% of the total mass of the asteroid belt. It is a C-type asteroid
C-type asteroid
C-type asteroids are carbonaceous asteroids. They are the most common variety, forming around 75% of known asteroids, and an even higher percentage in the outer part of the asteroid belt beyond 2.7 AU, which is dominated by this asteroid type...
, which means that it is dark in colouring with a carbonate composition.

Davida is one of the few main-belt asteroids whose shape has been determined by ground-based visual observation. From 2002 to 2007, astronomers at the Keck Observatory used the Keck II telescope, which is fitted with adaptive optics
Adaptive optics
Adaptive optics is a technology used to improve the performance of optical systems by reducing the effect of wavefront distortions. It is used in astronomical telescopes and laser communication systems to remove the effects of atmospheric distortion, and in retinal imaging systems to reduce the...
, to photograph Davida. The asteroid is not a dwarf planet
Dwarf planet
A dwarf planet, as defined by the International Astronomical Union , is a celestial body orbiting the Sun that is massive enough to be spherical as a result of its own gravity but has not cleared its neighboring region of planetesimals and is not a satellite...
: there are at least two promontories and at least one flat facet with 15-km deviations from a best-fit ellipsoid. The facet is presumably a 150-km global-scale crater like the ones seen on 253 Mathilde
253 Mathilde
253 Mathilde is a main-belt asteroid about 50 km in diameter that was discovered by Johann Palisa in 1885. It has a relatively elliptical orbit that requires more than four years to circle the Sun. This asteroid has an unusually slow rate of rotation, requiring 17.4 days to complete a...
. Conrad et al. (2007) show that craters of this size "can be expected from the impactor size distribution, without likelihood of catastrophic disruption of Davida."

In 2001, Michalak estimated Davida to have a mass of (6.64±0.56) kg In 2007, Baer and Chesley estimated Davida to have a mass of (5.9±0.6) kg. , Baer suggests Davida has a mass of (3.84±0.20) kg. This most recent estimate by Baer suggests that Davida is less massive than 704 Interamnia
704 Interamnia
704 Interamnia is a very large asteroid, with an estimated diameter of 350 kilometres. Its mean distance from the Sun is 3.067 . It was discovered on October 2, 1910 by Vincenzo Cerulli, and named after the Latin name for Teramo, Italy, where Cerulli worked...
, making Davida the sixth-most-massive asteroid, though the error bar
Error bar
Error bars are a graphical representation of the variability of data and are used on graphs to indicate the error, or uncertainty in a reported measurement. They give a general idea of how accurate a measurement is, or conversely, how far from the reported value the true value might be...
s overlap.