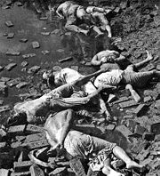 Encyclopedia
Beginning with the start of Operation Searchlight
Operation Searchlight
Operation Searchlight was a planned military operation carried out by the Pakistan Army to curb the Bengali nationalist movement in the erstwhile East Pakistan in March 1971. Ordered by the central government in West Pakistan, this was seen as the sequel to "Operation Blitz" which had been...
on 25 March 1971 and continuing throughout the Bangladesh Liberation War
Bangladesh Liberation War
The Bangladesh Liberation War was an armed conflict pitting East Pakistan and India against West Pakistan. The war resulted in the secession of East Pakistan, which became the independent nation of Bangladesh....
, there were widespread violations of human rights
Human rights
Human rights are "commonly understood as inalienable fundamental rights to which a person is inherently entitled simply because she or he is a human being." Human rights are thus conceived as universal and egalitarian . These rights may exist as natural rights or as legal rights, in both national...
in East Pakistan
East Pakistan
East Pakistan was a provincial state of Pakistan established in 14 August 1947. The provincial state existed until its declaration of independence on 26 March 1971 as the independent nation of Bangladesh. Pakistan recognized the new nation on 16 December 1971. East Pakistan was created from Bengal...
(now Bangladesh
Bangladesh
Bangladesh , officially the People's Republic of Bangladesh is a sovereign state located in South Asia. It is bordered by India on all sides except for a small border with Burma to the far southeast and by the Bay of Bengal to the south...
) perpetrated by the Pakistan Army
Pakistan Army
The Pakistan Army is the branch of the Pakistani Armed Forces responsible for land-based military operations. The Pakistan Army came into existence after the Partition of India and the resulting independence of Pakistan in 1947. It is currently headed by General Ashfaq Parvez Kayani. The Pakistan...
, with support from local political and religious militias, especially against Hindus. Time
Time (magazine)
Time is an American news magazine. A European edition is published from London. Time Europe covers the Middle East, Africa and, since 2003, Latin America. An Asian edition is based in Hong Kong...
reported a high ranking U.S. official as saying "It is the most incredible, calculated thing since the days of the Nazis in Poland
Poland
Poland , officially the Republic of Poland , is a country in Central Europe bordered by Germany to the west; the Czech Republic and Slovakia to the south; Ukraine, Belarus and Lithuania to the east; and the Baltic Sea and Kaliningrad Oblast, a Russian exclave, to the north...
."

Bangladeshi authorities claim that 3 million people were killed, while the Hamoodur Rahman Commission, an official Pakistan Government investigation, put the figure as low as 26,000 civilian casualties. The international media and reference books in English have also published figures which vary greatly from 200,000 to 3,000,000 for Bangladesh as a whole. A further eight to ten million people fled the country to seek safety in India
India
India , officially the Republic of India , is a country in South Asia. It is the seventh-largest country by geographical area, the second-most populous country with over 1.2 billion people, and the most populous democracy in the world...
.

Many of the murdered intellectuals were victims of the collaborators within the West Pakistan Army: Razakars, Al-Shams and Al-Badr
Al-Badr (East Pakistan)
The Al-Badr was the paramilitary wing of the Jamaat-e-Islami in Bangladesh that collaborated with the Pakistan Army against the Bengali nationalist movement in the Bangladesh Liberation War. The present chief of the Jamaat, Maulana Motiur Rahman Nizami headed the Al-Badr organisation as the...
forces, at the instruction of the Pakistani Army. There are many mass graves in Bangladesh, and more are continually being discovered (such as one in an old well near a mosque in Dhaka
Dhaka
Dhaka is the capital of Bangladesh and the principal city of Dhaka Division. Dhaka is a megacity and one of the major cities of South Asia. Located on the banks of the Buriganga River, Dhaka, along with its metropolitan area, had a population of over 15 million in 2010, making it the largest city...
, located in the non-Bengali region of the city, which was discovered in August 1999). The first night of war on Bengalis, which is documented in telegrams from the American Consulate in Dhaka to the United States State Department, saw indiscriminate killings of students of Dhaka University and other civilians.

Numerous women were raped, tortured and killed during the war. The exact numbers are not known and are a subject of debate with some sources quoting figures as high as 400,000. One of the more horrible revelations concerns 563 young Bengali women, some only 18, who were held captive inside Dhaka's dingy military cantonment
Cantonment
A cantonment is a temporary or semi-permanent military or police quarters. The word cantonment is derived from the French word canton meaning corner or district, as is the name of the Cantons of Switzerland. In South Asia, the term cantonment also describes permanent military stations...
since the first days of the fighting. They were seized from Dhaka University and private homes and forced into military brothels, with some of the women carrying war babies
War Babies
War Babies is the third album by Hall & Oates, released in 1974, and their last of three albums for Atlantic Records before moving to the RCA label...
being released.

There was significant sectarian violence not only perpetrated by the West Pakistani army, but also by Bengali nationalists against non-Bengali minorities, especially Bihari
Bihari people
The Biharis are an ethnic group originating from the present state of Bihar with a history going back three millennia...
s.