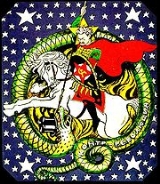 1918    First victory of Red Army over the Kaiser's German troops near Narva and Pskov. In honor of this victory, the date is celebrated from 1923 onward as "Red Army Day"; it is renamed Defender of the Fatherland Day after the fall of the Soviet Union in 1991, and is colloquially known as "Men's Day".

1920    Kiev Offensive: Polish troops led by Józef Piłsudski and Edward Rydz-Śmigły and assisted by a symbolic Ukrainian force capture Kiev only to be driven out by the Red Army counter-offensive a month later.

1920    Polish-Soviet War: the Battle of Warsaw begins and will last till August 25. The Red Army is defeated.

1921    The Red Army captures Mongolia from the White Army and establishes the Mongolian People's Republic.

1939    Joint victory parade of Wehrmacht and Red Army in Brest-Litovsk at the end of the Invasion of Poland.

1942    World War II: Second Battle of Kharkov: in eastern Ukraine, Red Army forces under Marshal Semyon Timoshenko launch a major offensive from the Izium bridgehead, only to be encircled and destroyed by the troops of Army Group South two weeks later.

1943    World War II: The Battle of Stalingrad comes to conclusion as Soviet troops accept the surrender of 91,000 remnants of the Axis forces.

1945    Liberation of the Budapest ghetto by the Red Army.

1945    World War II: The siege of Budapest concludes with the unconditional surrender of German and Hungarian forces to the Red Army.

1945    The Red Army begins the final assault on German forces around Berlin.

1988    Soviet war in Afghanistan: After more than eight years of fighting, the Red Army begins its withdrawal from Afghanistan.