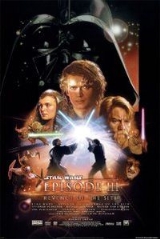 Quotations
Star Wars Episode III: Revenge of the Sith is a 2005 space opera film. It is the final film of the Star Wars prequel trilogy. The film is set three years after the start of the Clone Wars; the noble Jedi Knights are spread across the galaxy leading a massive clone army against the Separatists. After Chancellor Palpatine is kidnapped by the evil General Grievous, Jedi Master Obi-Wan Kenobi and his former Padawan Anakin Skywalker are dispatched to rescue him. Meanwhile, Anakin's friendship with the Chancellor arouses suspicion in the Jedi Order and proves dangerous to the Jedi Knight himself. When the evil Sith Lord, Darth Sidious, unveils a plot to to take over the galaxy, the fate of Anakin, the Jedi Order, and the entire galaxy is at stake.

Written and directed by George Lucas.

The Saga Is Complete. Taglines

War! The Republic is crumbling under attacks by the ruthless Sith Lord, Count Dooku. There are heroes on both sides. Evil is everywhere.

In a stunning move, the fiendish droid leader, General Grievous, has swept into the Republic capital and kidnapped Chancellor Palpatine, leader of the Galactic Senate.

As the Separatist Droid Army attempts to flee the besieged capital with their valuable hostage, two Jedi Knights lead a desperate mission to rescue the captive Chancellor...

Anakin Skywalker: Lock onto him, R2. Master, General Grievous' ship is dead ahead. The one crawling with vulture droids.
Obi-Wan Kenobi: Oh, I see it. Oh, this is going to be easy! Oddball, form up a squadron behind me.
Clone Pilot: We're on your tail, General Kenobi. Set S-Foils to attack position. (Fighter then prepares to attack the Droid Tri Fighters)


Mace Windu: You all right, Chancellor?
Palpatine: Yes. Thanks to your Jedi Knights, I was rescued. They killed Count Dooku, but Grievous has escaped.
Mace Windu: Grievous will always run. He's a coward. We will make finding him our top priority.


Anakin: [After reassuring Padmé that the rumors surrounding him during his absence were false] Are you all right? You're trembling.
Padmé: Something wonderful has happened. Ani... I'm pregnant.
Anakin: [Pauses out of shock] ...That's... Well, that's won- that's wonderful.


Mace Windu: It's very dangerous putting them together. I don't think the boy can handle it. I don't trust him.
Obi-Wan Kenobi: With all due respect, Master, is he not the Chosen One? Is he not to destroy the Sith and bring balance to the Force?
Mace Windu: So the prophecy says.
Master Yoda: A prophecy that misread could have been.
Obi-Wan: He will not let me down. He never has.


[Upon arrival on Utapau, Obi-Wan meets the Pau'an Master of Port Administration, Tion Medon]
Tion Medon: Greetings, young Jedi. What brings you to our remote sanctuary?
Obi-Wan Kenobi: Unfortunately, the war.
Tion Medon: There is no war here... [Sternly] unless you've brought it with you.
Obi-Wan Kenobi: With your kind permission, I should like some fuel and to use your city as a base as I search nearby systems for General Grievous.
Tion Medon: [Signals a ground crew of Utai to refuel Obi-Wan's ship, then turns to Obi-Wan secretively] He is here. We are being held hostage. They are watching us.
Obi-Wan Kenobi: I understand.
Tion Medon: Tenth level... thousands of Battle Droids.
Obi-Wan Kenobi: Tell your people to take shelter. If you have warriors, now is the time.


General Grievous: It won't be long before the armies of the Republic track us here. I am sending you to the Mustafar system in the outer rim. It is a volcanic planet which generates a great deal of scanning interference. You will be safe there.
Nute Gunray: Safe?! Hmph! Chancellor Palpatine managed to escape your grip, General! Without Count Dooku, I have doubts about your ability to keep us safe!
General Grievous: Be thankful, Viceroy! You have not found yourself in my grip. Your ship is waiting.


Obi-Wan Kenobi: [jumps down from the upper levels] Hello, there.
[All droids activate their weapons and surround Obi-Wan.]
General Grievous: General Kenobi. You are a bold one. [To the Magna Guards] Kill him!
[The Magna guards advance. Obi-wan pulls down a heating vent on top of them and cut one of their heads off.]
General Grievous: [To the droids] Back away! I will deal with this Jedi slime myself!
Obi-Wan Kenobi: Your move.
General Grievous: You fool! I've been trained in your Jedi arts by Count Dooku.
[Grievous takes off his cloak and his two arms split into four. He coughs during this process. Each activates and wields a stolen lightsaber.]
General Grievous: Attack, Kenobi!


[The Republic arrives to attack the droids and Obi Wan had sliced off Grievous's arms.]
General Grievous: Armed or not, you must realize, you are doomed.
Obi-Wan Kenobi: Oh, I don't think so.


Palpatine: Master Windu. I take it General Grievous has been destroyed, then. I must say you are here sooner than expected.
Mace Windu: In the name of the Galactic Senate of the Republic, you are under arrest, Chancellor.
Chancellor Palpatine: [Dangerously] Are you threatening me, Master Jedi?
Mace Windu: The Senate will decide your fate.
Chancellor Palpatine: I am the Senate!
Mace Windu: Not yet.
Chancellor Palpatine: [After yanking out a secret lightsaber] It's treason, then.
[He ignites the saber, then suddenly leaps forward with a roar of aggression. He quickly kills Agen Kolar, Saesee Tiin and Kit Fisto, leaving only Windu to continue the fight.]


Darth Sidious: Because the Council did not trust you, my young apprentice, I believe you're the only Jedi with no knowledge of their plot. When the Jedi learn what has transpired here, they will kill us, along with all the Senators.
Darth Vader: I agree. The Council's next move will be against the Senate.
Darth Sidious: Every single Jedi — including your friend, Obi-Wan Kenobi — is now an enemy of the Republic!
Darth Vader: I understand, Master.
Darth Sidious: We must move quickly. The Jedi are relentless. If they are not all destroyed, there will be civil war without end. First, I want you to go to Jedi Temple. We will catch them off balance. Do what must be done, Lord Vader. Do not hesitate. Show no mercy. Only then, will you be strong enough with the Dark Side to save Padmé.
Darth Vader: What about the other Jedi that are spread across the galaxy?
Darth Sidious: Their betrayal will be dealt with. After you have killed all the Jedi in the temple, go to the Mustafar system. Wipe out Viceroy Gunray and the other Separatist leaders. Once more, the Sith will rule the galaxy! And we shall have... peace.


Palpatine: The war is over. The Separatists have been eliminated. And the Jedi rebellion has been foiled. We stand on the threshold of a new beginning.
Bail Organa: What's happening?
Padmé: The Chancellor has been elaborating on a plot by the Jedi to overthrow the Senate.
Palpatine: The remaining Jedi will be hunted down and defeated! Any collaborators will suffer the same fate! These have been trying times, but we have passed the test. The attempt on my life has left me scarred and deformed. But, I assure you, my resolve has never been stronger! In order to ensure our security and continuing stability, the Republic will be reorganized into the First Galactic Empire...for a safe and secure society!
Padmé: So this is how liberty dies...with thunderous applause.


[After the massacre at the Jedi temple]
Obi-Wan Kenobi: I've recalibrated the code, warning all surviving Jedi to stay away.
Master Yoda: For the clones, to discover the recalibration, a long time, it will take. And to change it back, longer, still.
Obi-Wan Kenobi: Wait, Master. There is something I must know. [inspects a security hologram]
Master Yoda: If into the security recordings you go, only pain, will you find.
Obi-Wan Kenobi: I must know the truth, Master.
[The hologram shows Anakin/Vader killing children, and pledging his alliegance to Palpatine]
Obi-Wan Kenobi: [Horrified] It can't be. It can't be!
Palpatine: [On hologram] You have done well, my new apprentice. Now, Lord Vader, go and bring peace to the Empire.
Obi-Wan Kenobi: [Horrified] I can't watch anymore! [Obi-Wan deactivates the hologram]
Master Yoda: Destroy the Sith, we must.
Obi-Wan Kenobi: Send me to kill the Emperor. I will not kill Anakin.
Yoda: To fight this Lord Sidious, strong enough, you are not.
Obi-Wan Kenobi: He is like my brother. I cannot do it.
Master Yoda: Twisted by the dark side, young Skywalker has become. The boy you trained... gone, he is. Consumed by Darth Vader.
Obi-Wan Kenobi: I do not know where the Emperor has sent him. I don't know where to look.
Yoda: Use your feelings, Obi-Wan, and find him, you will. Pay the new Emperor a visit, I must.

Master Yoda: I hear a new apprentice you have, Emperor... or should I call you Darth Sidious?
Emperor Palpatine: Master Yoda... you survived.
Master Yoda: Surprised?
Emperor Palpatine: Your arrogance blinds you, Master Yoda. Now you will experience.... the full power of the dark side!
[He strikes Yoda to the floor with Force Lightning]
Emperor Palpatine: I have waited a long time for this moment, my little green friend. At last, the Jedi are no more.
Yoda: Not if anything to say about it I have!
[Yoda Force-flings Palpatine across the room and across his desk]
Yoda: At an end, your rule is. And not short enough, it was!
[Palpatine leaps towards a door in panic, but Yoda leaps in and blocks his way]
Yoda: If so powerful you are... why leave? [Ignites his lightsaber]
Emperor Palpatine: You will not stop me! Darth Vader will become more powerful than either of us! [Ignites his lightsaber]
Yoda: Faith in your new apprentice, misplaced may be. As is your faith in the dark side of the Force.


[Obi-Wan Kenobi has cut off Vader's legs and part of his remaining good arm on one of Mustafar's higher grounds. Vader is struggling near the lava river]
Obi-Wan Kenobi: You were the Chosen One! You were supposed to destroy the Sith, not join them...Bring balance to the Force, not leave it in darkness! [He picks up Anakin Skywalker's light saber]
Darth Vader: I HATE YOU!
Obi-Wan Kenobi: You were my brother, Anakin. I loved you!
[Vader, now too close to the lava river, catches on fire. Obi-Wan leaves]


[Darth Vader is now a cyborg with prothesic legs and arms, fully clothed in black armor with respirator mask. The operating table he is on has risen to vertical position]
Emperor Palpatine: Lord Vader, can you hear me?
Darth Vader: [In mechanical voice] Yes, Master. Where is Padmé? Is she safe? Is she alright?
Emperor Palpatine: It seems, that in your anger, you killed her.
Darth Vader: I... I couldn't have. She was alive! I felt it!
[In his anguish, Vader damages several surrounding objects and droids through the Force. He then breaks the clamps that have been holding him down and takes a few steps forward. Palpatine watches, grinning cruelly.]
Darth Vader: NOOOOOOOOOOOOOOOOOOOOOOO!!!!!


BKJTys: "Good this movie is"." Watch it you SHOULD"