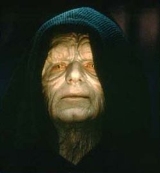 Overview
Palpatine is a fictional character
Fictional character
A character is the representation of a person in a narrative work of art . Derived from the ancient Greek word kharaktêr , the earliest use in English, in this sense, dates from the Restoration, although it became widely used after its appearance in Tom Jones in 1749. From this, the sense of...
and the main antagonist of the Star Wars saga, portrayed by Ian McDiarmid
Ian McDiarmid
Ian McDiarmid is a Scottish theatre actor and director, who has also made sporadic appearances on film and television.McDiarmid has had a successful career in theatre; he has been cast in many plays, while occasionally directing others and although he has appeared mostly in theatrical productions,...
in the feature films
Star Wars
Star Wars is an American epic space opera film series created by George Lucas. The first film in the series was originally released on May 25, 1977, under the title Star Wars, by 20th Century Fox, and became a worldwide pop culture phenomenon, followed by two sequels, released at three-year...
.

In the prequel trilogy, Palpatine is a middle-aged politician of the Republic
Galactic Republic (Star Wars)
The Galactic Republic is the name of the interplanetary State used in the fictional Star Wars universe prior to the establishment of the Galactic Empire. The form of this government, created by the Senate, was introduced in the Prequel Trilogy. By the time of the original Star Wars trilogy, it is...
who rises to power through deception and treachery.