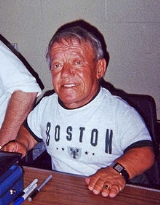 Encyclopedia
Kenneth George "Kenny" Baker (born 24 August 1934) is a British
United Kingdom
The United Kingdom of Great Britain and Northern IrelandIn the United Kingdom and Dependencies, other languages have been officially recognised as legitimate autochthonous languages under the European Charter for Regional or Minority Languages...
actor
Actor
An actor is a person who acts in a dramatic production and who works in film, television, theatre, or radio in that capacity...
and musician, best known as the man inside R2-D2
R2-D2
R2-D2 , is a character in the Star Wars universe. An astromech droid, R2-D2 is a major character throughout all six Star Wars films. Along with his droid companion C-3PO, he joins or supports Anakin Skywalker, Luke Skywalker, Princess Leia, and Obi-Wan Kenobi in various points in the saga...
in the popular Star Wars
Star Wars
Star Wars is an American epic space opera film series created by George Lucas. The first film in the series was originally released on May 25, 1977, under the title Star Wars, by 20th Century Fox, and became a worldwide pop culture phenomenon, followed by two sequels, released at three-year...
film series.

Baker, who stands 3 ft 8 in (112 cm) tall, was educated in Birmingham
Birmingham
Birmingham is a city and metropolitan borough in the West Midlands of England. It is the most populous British city outside the capital London, with a population of 1,036,900 , and lies at the heart of the West Midlands conurbation, the second most populous urban area in the United Kingdom with a...
and boarding school
Boarding school
A boarding school is a school where some or all pupils study and live during the school year with their fellow students and possibly teachers and/or administrators. The word 'boarding' is used in the sense of "bed and board," i.e., lodging and meals...
in Kent
Kent
Kent is a county in southeast England, and is one of the home counties. It borders East Sussex, Surrey and Greater London and has a defined boundary with Essex in the middle of the Thames Estuary. The ceremonial county boundaries of Kent include the shire county of Kent and the unitary borough of...
. He is an only child, and wanted to follow in his father's footsteps and be an engraver but hadn't received sufficient education. He went to live with his stepmother in Hastings
Hastings
Hastings is a town and borough in the county of East Sussex on the south coast of England. The town is located east of the county town of Lewes and south east of London, and has an estimated population of 86,900....
, and in 1951 was approached on the street by a lady who invited him to join a theatrical troupe of dwarves and midgets. This was his first taste of show business. Later, he joined a circus
Circus
A circus is commonly a travelling company of performers that may include clowns, acrobats, trained animals, trapeze acts, musicians, hoopers, tightrope walkers, jugglers, unicyclists and other stunt-oriented artists...
for a brief time, learned to ice-skate and appeared in many ice shows. He had formed a successful comedy act called the Minitones with entertainer Jack Purvis
Jack Purvis (actor)
Jack Purvis was a British film actor. Purvis was a dwarf, and thus was mainly cast in roles requiring actors of short stature...
when George Lucas
George Lucas
George Walton Lucas, Jr. is an American film producer, screenwriter, and director, and entrepreneur. He is the founder, chairman and chief executive of Lucasfilm. He is best known as the creator of the space opera franchise Star Wars and the archaeologist-adventurer character Indiana Jones...
hired him to be the man inside R2-D2
R2-D2
R2-D2 , is a character in the Star Wars universe. An astromech droid, R2-D2 is a major character throughout all six Star Wars films. Along with his droid companion C-3PO, he joins or supports Anakin Skywalker, Luke Skywalker, Princess Leia, and Obi-Wan Kenobi in various points in the saga...
in Star Wars
Star Wars Episode IV: A New Hope
Star Wars Episode IV: A New Hope, originally released as Star Wars, is a 1977 American epic space opera film, written and directed by George Lucas. It is the first of six films released in the Star Wars saga: two subsequent films complete the original trilogy, while a prequel trilogy completes the...
in 1977.

Baker appears in all six of the episodic theatrical Star Wars films. Baker played an additional role in 1983's Return of the Jedi
Star Wars Episode VI: Return of the Jedi
Star Wars Episode VI: Return of the Jedi is a 1983 American epic space opera film directed by Richard Marquand and written by George Lucas and Lawrence Kasdan. It is the third film released in the Star Wars saga, and the sixth in terms of the series' internal chronology...
as Paploo, the Ewok
Ewok
Ewoks originate from the Star Wars films. In the series, they are a species of teddy-bear-like hunter-gatherers that inhabit the forest moon of Endor. The Ewoks live in various tree-huts and primitive dwellings. They first appeared in the film Star Wars Episode VI: Return of the Jedi...
who steals an Imperial speeder bike
Speeder bike
Speeder bikes and swoop bikes are small, fast transports that use repulsorlift engines in the fictional Star Wars universe. Star Wars Episode VI: Return of the Jedi includes a prominent speeder bike chase; speeders and swoops also appear in Star Wars Episode I: The Phantom Menace, Star Wars Episode...
. He was originally going to play Wicket, but he fell ill and that role was handed over to Warwick Davis
Warwick Davis
Warwick Ashley Davis is an English actor. He is most notable for playing the title characters in Willow and the Leprechaun film series, as well as for his roles in Star Wars Episode VI: Return of the Jedi and the Harry Potter movies. Davis currently stars in the sitcom Life's Too Short, written...
. Kenny is featured on Justin Lee Collins
Justin Lee Collins
Justin Lee Collins, commonly known as JLC, is an award-winning English comedian and television presenter.A Bristolian, he's well known for his strong West Country accent, shaggy appearance and colourful shirts....
's "Bring Back Star Wars". He revealed a feud
Feud
A feud , referred to in more extreme cases as a blood feud, vendetta, faida, or private war, is a long-running argument or fight between parties—often groups of people, especially families or clans. Feuds begin because one party perceives itself to have been attacked, insulted or wronged by another...
between him and his co-star Anthony Daniels
Anthony Daniels
Anthony Daniels is an English actor. He is best known for his role as the droid C-3PO in the Star Wars series of films made between 1977 and 2005.-Early life:...
. He claimed Daniels had been rude to him on numerous occasions, and states that Daniels is rude to everyone, including fans. He even said he wouldn't be in the same room as Daniels unless necessary.

Baker's other films include The Elephant Man
The Elephant Man (film)
The Elephant Man is a 1980 American drama film based on the true story of Joseph Merrick , a severely deformed man in 19th century London...
, Time Bandits
Time Bandits
Time Bandits is a 1981 British fantasy film produced and directed by Terry Gilliam.Terry Gilliam wrote the screenplay with fellow Monty Python alumnus Michael Palin, who appears with Shelley Duvall in the small, recurring roles of Vincent and Pansy. The film is one of the most famous of more than...
(also with Purvis), Amadeus
Amadeus (film)
Amadeus is a 1984 period drama film directed by Miloš Forman and written by Peter Shaffer. Adapted from Shaffer's stage play Amadeus, the story is based loosely on the lives of Wolfgang Amadeus Mozart and Antonio Salieri, two composers who lived in Vienna, Austria, during the latter half of the...
and Jim Henson's
Jim Henson
James Maury "Jim" Henson was an American puppeteer best known as the creator of The Muppets. As a puppeteer, Henson performed in various television programs, such as Sesame Street and The Muppet Show, films such as The Muppet Movie and The Great Muppet Caper, and created advanced puppets for...
Labyrinth
Labyrinth (film)
Labyrinth is a 1986 British/American fantasy film directed by Jim Henson, produced by George Lucas, and designed by Brian Froud. Henson collaborated on the screenwriting with children's author Dennis Lee, Terry Jones from Monty Python, and Elaine May .The film stars David Bowie as Jareth the Goblin...
. On television, he appeared in the British medical drama Casualty
Casualty (TV series)
Casualty, stylised as Casual+y, is a British weekly television show broadcast on BBC One, and the longest-running emergency medical drama television series in the world. Created by Jeremy Brock and Paul Unwin, it was first broadcast on 6 September 1986, and transmitted in the UK on BBC One. The...
.

In the late 1990s, Baker launched a brief stand up comedy career. Baker played harmonica
Harmonica
The harmonica, also called harp, French harp, blues harp, and mouth organ, is a free reed wind instrument used primarily in blues and American folk music, jazz, country, and rock and roll. It is played by blowing air into it or drawing air out by placing lips over individual holes or multiple holes...
with the James Coutts Scottish Dance Band at Hugh McCaig's Silverstone Party in July 1997. Baker currently resides in Preston, England. While both he and his wife have dwarfism
Dwarfism
Dwarfism is short stature resulting from a medical condition. It is sometimes defined as an adult height of less than 4 feet 10 inches  , although this definition is problematic because short stature in itself is not a disorder....
, their two sons do not.

In November 2009 his biography entitled "From Tiny Acorns: The Kenny Baker Story" was made available through his website and at conventions and book signings. It was written with Ken Mills of Writestuff Autographs of Lancaster and self-published by Writestuff Autographs ISBN 978-0-9563819-0-3.