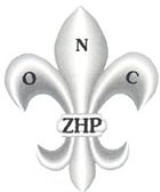 The Polish Scout movement was started in 1910. Initially the ideas of Scouting
Scouting
Scouting, also known as the Scout Movement, is a worldwide youth movement with the stated aim of supporting young people in their physical, mental and spiritual development, that they may play constructive roles in society....
were implemented by Andrzej Małkowski and his wife Olga. The three main branches of Polish Scouting included the Strzelec paramilitary organization for boys, a sport and education society Sokół and the anti-alcoholic association Eleusis. However, it wasn't until the Partitions of Poland
Partitions of Poland
The Partitions of Poland or Partitions of the Polish–Lithuanian Commonwealth took place in the second half of the 18th century and ended the existence of the Polish–Lithuanian Commonwealth, resulting in the elimination of sovereign Poland for 123 years...
came to an end that the ZHP would be officially founded by the merging of existing groups.

Soon after the merger in 1918, the ZHP members fought in all the conflicts Poland was engaged in around this time: Great Poland Uprising
Greater Poland Uprising (1918–1919)
The Greater Poland Uprising of 1918–1919, or Wielkopolska Uprising of 1918–1919 or Posnanian War was a military insurrection of Poles in the Greater Poland region against Germany...
, Polish-Bolshevik War, Silesian Uprisings
Silesian Uprisings
The Silesian Uprisings were a series of three armed uprisings of the Poles and Polish Silesians of Upper Silesia, from 1919–1921, against German rule; the resistance hoped to break away from Germany in order to join the Second Polish Republic, which had been established in the wake of World War I...
, and Polish-Ukrainian War, much like their predecessors during the Siege of Mafeking
Siege of Mafeking
The Siege of Mafeking was the most famous British action in the Second Boer War. It took place at the town of Mafeking in South Africa over a period of 217 days, from October 1899 to May 1900, and turned Robert Baden-Powell, who went on to found the Scouting Movement, into a national hero...
. 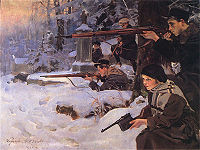 
Harcerstwo is Scouting
Scouting
Scouting, also known as the Scout Movement, is a worldwide youth movement with the stated aim of supporting young people in their physical, mental and spiritual development, that they may play constructive roles in society....
plus independence.

Before 1939 the ZHP was one of the largest social and educational associations in Poland with over 200,000 members. Among the "sponsors" of Polish Harcerstwo were all the presidents of Poland and several high-ranking officers, including general Józef Haller. 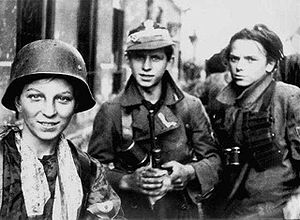 In 1945 the ZHP restored its former name and returned to public existence. However, the communist authorities of Poland pressured the organization to become a member of the Pioneer Movement
Pioneer movement
A pioneer movement is an organization for children operated by a communist party. Typically children enter into the organization in elementary school and continue until adolescence. The adolescents then typically joined the Young Communist League...
and eventually it was banned in 1949. The only existing part of pre-war ZHP is ZHP pgK.

In 1956, after Stalin's
Joseph Stalin
Joseph Vissarionovich Stalin was the Premier of the Soviet Union from 6 May 1941 to 5 March 1953. He was among the Bolshevik revolutionaries who brought about the October Revolution and had held the position of first General Secretary of the Communist Party of the Soviet Union's Central Committee...
and Bolesław Bierut's death, the communist party youth movement ZMP OH was transformed and renamed to ZHP. However the new ZHP did not consider itself as a continuation of the pre-war ZHP, but as a new organization (until 1980). After 1958 many pre-war instructors were removed from the new ZHP or marginalized (like Aleksander Kamiński
Aleksander Kaminski
Aleksander Kamiński was a Polish school teacher, form tutor, author of Polish Cub Scout and Brownie method, writer, historian, Scoutmaster , and wartime resistance leader under the codenames: Kamyk, Dąbrowski, J...
) and the original oath, law, educational content and methods were changed (mention of God was removed from oath, Lenin introduced as a hero, the Bolshevik Revolution was commemorated, the brigades became co-educational).

In 1989 after the period of peaceful transformation began, many groups of instructors formed separate Scouting organizations (like the ZHR
Zwiazek Harcerstwa Rzeczypospolitej
Związek Harcerstwa Rzeczypospolitej is a Polish Scouting organization founded on February 12, 1989. At present, Związek Harcerstwa Rzeczypospolitej has over 15,000 members...
, Stowarzyszenie Harcerstwa Katolickiego-Zawisza or ZHP-1918). These moves were prompted by political disagreements with the character of ZHP; they felt that its communist takeover left a permanent mark upon the organisation, and that the only way to effectively reform the movement was to found a new organisation. ZHR's founding will serve as an adequate example of this principle. After pope John Paul II's first pilgrimage to Poland in August 1980, some "non-conforming" instructors inside the ZHP created the Andrzej Małkowski Circle of Scout Instructors (KIHAM), with the objective to restore original scout ideals. These instructors presented reformative motions to the 7th Congress of ZHP at the beginning of 1981, but these were all rejected. When martial law was imposed in December 1981, the a large number of organisations were outlawed, so ZHR were force to conduct their activities - weekly meetings, yearly camps and so on - underground. The underground movement came to light in the fall of 1988. After they were unsuccessful in reforming the ZHP their way, the ZHR was founded.

The Scout Motto is "Czuwaj", translating literally as "be aware" or "stay awake" in Polish, symbolizing readiness. It was a historic admonition of medieval knights to one another, while on guard holding back the Mongols. The Polish nouns for single Scouts are Harcerz (M) and Harcerka (F).

It is my sincere wish to serve God and Poland with the whole of my life, to carry my willing help to others, and to obey the Scout and Guide Law.

There are four age groups, although the age limits are not strictly adhered to:

The basic unit of ZHP is a drużyna (troop), consisting of approximately 20 boys or girls. Each drużyna is formed by several units named zastęp consisting of about seven people. A few troops (especially working at the same school or housing estate) can be connected in one szczep (group). Several groups or/and troops from a specified area (borough, village, town) form a hufiec (district) which in turn is a part of one of the regions called chorągiew (literally banner). For example a particular Scout can be a member of