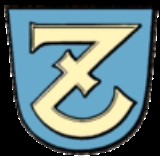 Encyclopedia
Zeilsheim is the westernmost district or Stadtteil of Frankfurt am Main, Germany
Germany
Germany , officially the Federal Republic of Germany , is a federal parliamentary republic in Europe. The country consists of 16 states while the capital and largest city is Berlin. Germany covers an area of 357,021 km2 and has a largely temperate seasonal climate...
. It is part of the Ortsbezirk West, and is subdivided into the Stadtbezirke Zeilsheim-Ost, Zeilsheim-Süd and Zeilsheim-Nord. It is somewhat rural in character and the surrounding fields can give a clear view of the Taunus
Taunus
The Taunus is a low mountain range in Hesse, Germany that composes part of the Rhenish Slate Mountains. It is bounded by the river valleys of Rhine, Main and Lahn. On the opposite side of the Rhine, the mountains are continued by the Hunsrück...
mountains.

Zeilsheim borders Kriftel
Kriftel
Kriftel is a municipality in the Main-Taunus district, in Hesse, Germany. It is situated 16 km west of Frankfurt .It has about 10,000 inhabitants....
in the west, Liederbach am Taunus
Liederbach am Taunus
Liederbach am Taunus is a town in Hesse, Germany with 8500 inhabitants. It is situated 20 km west of downtown Frankfurt am Main.-Twin towns: Saldus in the Courland region of Latvia Verwood in East Dorset, England. Villebon-sur-Yvette in the Essonne département of France-External links:*...
in the north, the district of Unterliederbach in the northeast, Höchst
Höchst (Frankfurt am Main)
Höchst is a district of Frankfurt am Main, Germany. It is part of the Ortsbezirk West, and is subdivided into 4 Stadtbezirke.Höchst am Main became part of Frankfurt am Main in 1928 together with its boroughs Sindlingen, Unterliederbach and Zeilsheim. It is situated 10 km west of downtown...
in the east, and Sindlingen in the southeast. In the north and west, it is bordered by the Bundesautobahn 66
Bundesautobahn 66
is an autobahn in southwestern Germany. It connects the Taunus to Fulda, passing close to Frankfurt am Main. The first part of the autobahn between Wiesbaden and the Nordwestkreuz Frankfurt, was opened as early as 1934, then called the Rhein-Main-Schnellweg. It became an autobahn in 1965.The...
Wiesbaden-Frankfurt.

The main street of the district is the Landesstraße
Landesstraße
Landesstraßen are roads in Germany and Austria that are, as a rule, the responsibility of the respective German or Austrian federal state. The term may therefore be translated as "state road". They are roads that cross the boundary of a rural or urban district...
3018 that lead through the L 3016 from Kelkheim through Unterliederbach, through Zeilsheim until Hofheim am Taunus. It is sometimes nicknamed the Pfaffenwiese or the Hofheimer Straße (Hofheim Street). It is also a major street used in public transport. Zeilsheim is linked by bus to the observation tower in Bockenheim, to Griesheim
Griesheim
Griesheim is a town in the Darmstadt-Dieburg district, in Hessen, Germany. It is situated approx. 7 km west of Darmstadt.-History:...
and to Niederrad, as well as by regional bus lines to Schwalbach am Taunus
Schwalbach am Taunus
Schwalbach am Taunus is a town in the Main-Taunus-Kreis district, in Hesse, Germany. It is situated approx. 11 km west of Frankfurt .-History:In the years 1961 to 1963 were archaeological discoveries made in the area of the today’s town centre...
und Hofheim.

A settlement in Zeilsheim was initiated by Hoechst AG
Hoechst AG
Hoechst AG was a German chemicals then life-sciences company that became Aventis Deutschland after its merger with France's Rhône-Poulenc S.A. in 1999...
to provide worker housing located near its factories. A similar settlement is Heimchen in Unterliederbach. The main street of the settlement was called Neu-Zeilsheim. Nearly all of the intersecting streets are ordered alphabetically. Today in the center lies a church erected in 1912. On the western borders stands the building of the Käthe-Kollwitz School erected in 1902.

In the north and southeast of the district arose the settlements Taunusblick (Taunus view) and Märchensiedlung (Fairy tale settlement). The name of the northwestern settlement derives from the ability to see the Taunus mountains on a clear day. Märchensiedlung is located south of the main road. The name refers to façades of the houses that contain images from the stories of the Brothers Grimm
Brothers Grimm
The Brothers Grimm , Jacob Grimm and Wilhelm Grimm , were German academics, linguists, cultural researchers, and authors who collected folklore and published several collections of it as Grimm's Fairy Tales, which became very popular...
.

The district was first founded as the independent town Ciolfesheim in 794.

Zeilsheim became famous for its camp created by the Allies to hold Displaced Persons and exiles after World War II
World War II
World War II, or the Second World War , was a global conflict lasting from 1939 to 1945, involving most of the world's nations—including all of the great powers—eventually forming two opposing military alliances: the Allies and the Axis...
, and in 1946 it was visited by Israeli
Israel
The State of Israel is a parliamentary republic located in the Middle East, along the eastern shore of the Mediterranean Sea...
prime minister David Ben Gurion and former American First Lady
First Lady
First Lady or First Gentlemanis the unofficial title used in some countries for the spouse of an elected head of state.It is not normally used to refer to the spouse or partner of a prime minister; the husband or wife of the British Prime Minister is usually informally referred to as prime...
Eleanor Roosevelt
Eleanor Roosevelt
Anna Eleanor Roosevelt was the First Lady of the United States from 1933 to 1945. She supported the New Deal policies of her husband, distant cousin Franklin Delano Roosevelt, and became an advocate for civil rights. After her husband's death in 1945, Roosevelt continued to be an international...
. A small monument in the park behind the city hall is dedicated to the memory of this community.

There is also a small museum with alternating exhibitions on the district's history.

It is divided in into three districts itself, North, South and West (Nord, Süd und West).