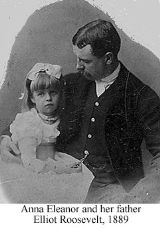 Overview
Anna Eleanor Roosevelt (ˈ; October 11, 1884 – November 7, 1962) was the First Lady of the United States
First Lady of the United States
First Lady of the United States is the title of the hostess of the White House. Because this position is traditionally filled by the wife of the president of the United States, the title is most often applied to the wife of a sitting president. The current first lady is Michelle Obama.-Current:The...
from 1933 to 1945. She supported the New Deal
New Deal
The New Deal was a series of economic programs implemented in the United States between 1933 and 1936. They were passed by the U.S. Congress during the first term of President Franklin D. Roosevelt. The programs were Roosevelt's responses to the Great Depression, and focused on what historians call...
policies of her husband, distant cousin Franklin Delano Roosevelt, and became an advocate for civil rights. After her husband's death in 1945, Roosevelt continued to be an international author, speaker, politician, and activist for the New Deal coalition
New Deal coalition
The New Deal Coalition was the alignment of interest groups and voting blocs that supported the New Deal and voted for Democratic presidential candidates from 1932 until the late 1960s. It made the Democratic Party the majority party during that period, losing only to Dwight D. Eisenhower in 1952...
. She worked to enhance the status of working women, although she opposed the Equal Rights Amendment
Equal Rights Amendment
The Equal Rights Amendment was a proposed amendment to the United States Constitution. The ERA was originally written by Alice Paul and, in 1923, it was introduced in the Congress for the first time...
because she believed it would adversely affect women.

Have you heard many of the topics covered in the book: A Personal and Public Life of Eleanor Roosevelt by William Youngs?
More

What sort of relationship did Eleanor have with her mother-in-law?

What hospital was she born in?

Did she have a second husband?
More

As quoted in How to Stop Worrying and Start Living (1944; 1948) by Dale Carnegie|Dale Carnegie; though Roosevelt has sometimes been credited with the originating the expression, "Damned if you do and damned if you don't" is set in quote marks, indicating she herself was quoting a common expression in saying this.

Understanding is a two-way street.

As quoted in Modern Quotations for Ready Reference (1947) by Arthur Richmond, p. 455

Life was meant to be lived, and curiosity must be kept alive. One must never, for whatever reason, turn his back on life.

I think, at a child's birth, if a mother could ask a fairy godmother to endow it with the most useful gift, that gift would be curiosity.

As quoted in Todays Health (October 1966)

When you cease to make a contribution, you begin to die.

I think that somehow, we learn who we really are and then live with that decision.

Friendship with oneself is all-important, because without it one cannot be friends with anyone else in the world.