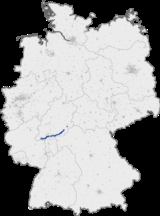 Encyclopedia
is an autobahn in southwestern Germany
Germany
Germany , officially the Federal Republic of Germany , is a federal parliamentary republic in Europe. The country consists of 16 states while the capital and largest city is Berlin. Germany covers an area of 357,021 km2 and has a largely temperate seasonal climate...
. It connects the Taunus
Taunus
The Taunus is a low mountain range in Hesse, Germany that composes part of the Rhenish Slate Mountains. It is bounded by the river valleys of Rhine, Main and Lahn. On the opposite side of the Rhine, the mountains are continued by the Hunsrück...
to Fulda
Fulda
Fulda is a city in Hesse, Germany; it is located on the river Fulda and is the administrative seat of the Fulda district .- Early Middle Ages :...
, passing close to Frankfurt am Main. The first part of the autobahn between Wiesbaden
Wiesbaden
Wiesbaden is a city in southwest Germany and the capital of the federal state of Hesse. It has about 275,400 inhabitants, plus approximately 10,000 United States citizens...
and the Nordwestkreuz Frankfurt, was opened as early as 1934, then called the Rhein-Main-Schnellweg. It became an autobahn in 1965.

The autobahn is incomplete; there still is a gap within Frankfurt
Frankfurt
Frankfurt am Main , commonly known simply as Frankfurt, is the largest city in the German state of Hesse and the fifth-largest city in Germany, with a 2010 population of 688,249. The urban area had an estimated population of 2,300,000 in 2010...
city limits. A tunnel
Tunnel
A tunnel is an underground passageway, completely enclosed except for openings for egress, commonly at each end.A tunnel may be for foot or vehicular road traffic, for rail traffic, or for a canal. Some tunnels are aqueducts to supply water for consumption or for hydroelectric stations or are sewers...
was proposed as a solution, however this was not carried out so far due to the high cost of construction. There is also a second gap southwest of Fulda; traffic is routed onto the B 40 for approximately 9 kilometers before the A 66 resumes just prior to the junction with the A 7. This section, which will include a 1.6 km tunnel, is currently under construction, with a completion target of late 2013.

/Erlensee
Erlensee
Erlensee is a municipality in the Main-Kinzig district, in Hesse, Germany. It is situated on the river Kinzig, 5 km northeast of Hanau. It was formed in 1970 by the merger, in 1970, of the towns of Langendiebach and Rückingen...