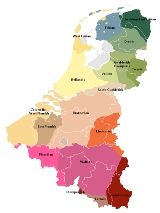 Encyclopedia
Zeelandic is a regional language
Regional language
A regional language is a language spoken in an area of a nation state, whether it be a small area, a federal state or province, or some wider area....
spoken in the Dutch
Netherlands
The Netherlands is a constituent country of the Kingdom of the Netherlands, located mainly in North-West Europe and with several islands in the Caribbean. Mainland Netherlands borders the North Sea to the north and west, Belgium to the south, and Germany to the east, and shares maritime borders...
province of Zeeland
Zeeland
Zeeland , also called Zealand in English, is the westernmost province of the Netherlands. The province, located in the south-west of the country, consists of a number of islands and a strip bordering Belgium. Its capital is Middelburg. With a population of about 380,000, its area is about...
and on the South Holland
South Holland
South Holland is a province situated on the North Sea in the western part of the Netherlands. The provincial capital is The Hague and its largest city is Rotterdam.South Holland is one of the most densely populated and industrialised areas in the world...
island of Goeree-Overflakkee
Goeree-Overflakkee
Goeree-Overflakkee is the southernmost delta island of the province of South Holland, Netherlands. It is separated from Voorne-Putten and Hoeksche Waard by the Haringvliet, from the mainland of North Brabant by the Volkerak, and from Schouwen-Duiveland by Lake Grevelingen.From west to east, it...
. Commonly considered a Dutch
Dutch language
Dutch is a West Germanic language and the native language of the majority of the population of the Netherlands, Belgium, and Suriname, the three member states of the Dutch Language Union. Most speakers live in the European Union, where it is a first language for about 23 million and a second...
dialect, it has notable differences mainly in pronunciation, but as well in grammar
Grammar
In linguistics, grammar is the set of structural rules that govern the composition of clauses, phrases, and words in any given natural language. The term refers also to the study of such rules, and this field includes morphology, syntax, and phonology, often complemented by phonetics, semantics,...
and vocabulary
Vocabulary
A person's vocabulary is the set of words within a language that are familiar to that person. A vocabulary usually develops with age, and serves as a useful and fundamental tool for communication and acquiring knowledge...
, which set it clearly apart from Standard Dutch and make easy comprehension by unskilled Dutch speakers difficult.
Zeelandic is included within West Flemish
West Flemish
West Flemish , , , Fransch vlaemsch in French Flemish) is a group of dialects or regional language related to Dutch spoken in parts of the Netherlands, Belgium, and France....
by some observers.

Zeelandic is a transitional regional language between Hollandic
Hollandic
Hollandic or Hollandish is, together with Brabantian, the most frequently used dialect of the Dutch language. Other important Low Franconian language varieties spoken in the same area are Zeelandic, East Flemish, West Flemish and Limburgish....
and West Flemish
West Flemish
West Flemish , , , Fransch vlaemsch in French Flemish) is a group of dialects or regional language related to Dutch spoken in parts of the Netherlands, Belgium, and France....
. In the Middle Ages
Middle Ages
The Middle Ages is a periodization of European history from the 5th century to the 15th century. The Middle Ages follows the fall of the Western Roman Empire in 476 and precedes the Early Modern Era. It is the middle period of a three-period division of Western history: Classic, Medieval and Modern...
and early modern age, Zeeland was claimed by the Count of Holland as well as the Count of Flanders
Flanders
Flanders is the community of the Flemings but also one of the institutions in Belgium, and a geographical region located in parts of present-day Belgium, France and the Netherlands. "Flanders" can also refer to the northern part of Belgium that contains Brussels, Bruges, Ghent and Antwerp...
, and the area was exposed to influence from both directions. The dialects clearly show a gradual increase of Hollandic elements as one goes northwards. Yet Zeelandic is fairly coherent with easily defined borders, as the broad sea-arms form strong isogloss
Isogloss
An isogloss—also called a heterogloss —is the geographical boundary of a certain linguistic feature, such as the pronunciation of a vowel, the meaning of a word, or use of some syntactic feature...
es.

The main differences from Standard Dutch are the following: Zeelandic has three rather than two grammatical genders, as a result of the fact that it retained the final schwa
Schwa
In linguistics, specifically phonetics and phonology, schwa can mean the following:*An unstressed and toneless neutral vowel sound in some languages, often but not necessarily a mid-central vowel...
s in feminine words; it kept the monophthongs [i] and [y] for ij and ui rather than breaking them into [ɛi] and [œy]; it umlauted most [aː]s into [ɛː]s; it renders the old Germanic [ai] and [au] as falling diphthongs ([eə] and [ɔə]), whereas Dutch merged them with etymological e's and o's; and finally it drops the h.

The present table illustrates these differences (note: the orthography is Dutch):

The province of Zeeland consists of several former islands which were difficult to reach until well into the 20th century. As a result, there is roughly one dialect per island. The respective dialects differ clearly, but only slightly. The Goeree-Overflakkee dialect, for example, does not drop the h, and the Walcheren
Walcheren
thumb|right|250px|Campveer Tower in Veere, built in 1500Walcheren is a former island in the province of Zeeland in the Netherlands at the mouth of the Scheldt estuary. It lies between the Oosterschelde in the north and the Westerschelde in the south and is roughly the shape of a rhombus...
and Zuid-Beveland
Zuid-Beveland
Zuid-Beveland is a part of the province of Zeeland in the Netherlands north of the Westerschelde and south of the Oosterschelde. It is a former island, now peninsula, crossed by the Canal through Zuid-Beveland on the west and the Scheldt-Rhine Canal on the east.It consists of four...
dialects have umlauted
Germanic umlaut
In linguistics, umlaut is a process whereby a vowel is pronounced more like a following vowel or semivowel. The term umlaut was originally coined and is used principally in connection with the study of the Germanic languages...
words where the northern ones don't (for example: beuter [bøtər] against boter [botər]. Within the island dialects themselves dialectal differences also exist: native speakers can frequently tell which village (at least on their own island) a person is from by the specific dialect he or she speaks, even if the differences are imperceptible to outsiders.

The Zeelandic Flanders region contains dialects that are largely outside the definition of Zeelandic, but must be considered West Flemish
West Flemish
West Flemish , , , Fransch vlaemsch in French Flemish) is a group of dialects or regional language related to Dutch spoken in parts of the Netherlands, Belgium, and France....
and East Flemish
East Flemish
East Flemish is a group of dialects of the Dutch language, which is a Low Franconian language. It is spoken in the province of East Flanders in Belgium, but also spoken in Zeeuws-Vlaanderen in the Netherlands.-Brabantic Expansion:...
. The West Flemish dialects in this region, however, are yet commonly classified as "Zeelandic".

Zeelandic bears the burden of being strongly associated with the rural population, being spoken chiefly in the countryside. The town dialects of Middelburg
Middelburg
Middelburg is a municipality and a city in the south-western Netherlands and the capital of the province of Zeeland. It is situated in the Midden-Zeeland region. It has a population of about 48,000.- History of Middelburg :...
and Vlissingen are both much closer to Hollandic than the rural variants and on the edge of extinction. Surveys held in the nineties showed that at least 60% of the Zeeland population still use Zeelandic as their everyday language. There are an estimated 250,000 people who speak it as mother tongue (West Zeelandic Flemish is included in this count), and although it is in decline, just as any other regional language, it is in no direct danger of extinction, since in some villages with strong isolated communities more than 90% of the youngsters will speak Zeelandic. On the other hand, in several villages that have seen much immigration, the local dialect is spoken only by the adult population, as children are not taught it any longer.

There is a lobby for recognising the Zeelandic regional language under the European charter for minority languages. , they failed so far to achieve this status.