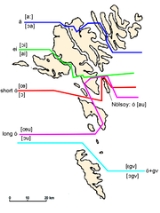 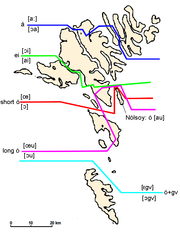 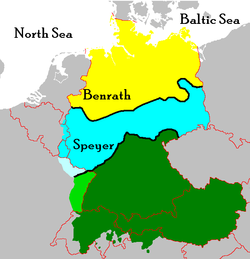 An isogloss—also called a heterogloss (see Etymology below)—is the geographical boundary of a certain linguistic
Linguistics
Linguistics is the scientific study of human language. Linguistics can be broadly broken into three categories or subfields of study: language form, language meaning, and language in context....
feature, such as the pronunciation of a vowel
Vowel
In phonetics, a vowel is a sound in spoken language, such as English ah! or oh! , pronounced with an open vocal tract so that there is no build-up of air pressure at any point above the glottis. This contrasts with consonants, such as English sh! , where there is a constriction or closure at some...
, the meaning of a word, or use of some syntactic feature. Major dialect
Dialect
The term dialect is used in two distinct ways, even by linguists. One usage refers to a variety of a language that is a characteristic of a particular group of the language's speakers. The term is applied most often to regional speech patterns, but a dialect may also be defined by other factors,...
s are typically demarcated by groups of isoglosses; for example the Benrath line
Benrath line
In German linguistics, the Benrath line is the maken-machen isogloss: dialects north of the line have the original in maken , while those to the south have...
distinguishes High German
High German languages
The High German languages or the High German dialects are any of the varieties of standard German, Luxembourgish and Yiddish, as well as the local German dialects spoken in central and southern Germany, Austria, Liechtenstein, Switzerland, Luxembourg and in neighboring portions of Belgium and the...
from the other West Germanic languages
West Germanic languages
The West Germanic languages constitute the largest of the three traditional branches of the Germanic family of languages and include languages such as German, English, Dutch, Afrikaans, the Frisian languages, and Yiddish...
; and the La Spezia-Rimini Line
La Spezia-Rimini Line
The La Spezia–Rimini Line , in the linguistics of the Romance languages, is a line that demarcates a number of important isoglosses that distinguish Romance languages south and east of the line from Romance languages north and west of it...
divides the Northern Italian dialects from Central Italian dialects. However, an individual isogloss may or may not have any coincidence with a language border
Language border
A language border or language boundary is the line separating two language areas. The term is generally meant to imply a lack of mutual intelligibility between the two languages...
. For example, the front-rounding of /y/ cuts across France and Germany, while the /y/ is absent from Italian and Spanish words that are cognate with the /y/-containing French words.


In some branches (for example Greek
Ancient Greek
Ancient Greek is the stage of the Greek language in the periods spanning the times c. 9th–6th centuries BC, , c. 5th–4th centuries BC , and the c. 3rd century BC – 6th century AD of ancient Greece and the ancient world; being predated in the 2nd millennium BC by Mycenaean Greek...
, Italic
Italic languages
The Italic subfamily is a member of the Indo-European language family. It includes the Romance languages derived from Latin , and a number of extinct languages of the Italian Peninsula, including Umbrian, Oscan, Faliscan, and Latin.In the past various definitions of "Italic" have prevailed...
and Germanic
Germanic languages
The Germanic languages constitute a sub-branch of the Indo-European language family. The common ancestor of all of the languages in this branch is called Proto-Germanic , which was spoken in approximately the mid-1st millennium BC in Iron Age northern Europe...
), the palatals fell together with the velars: PIE "tremble (inwardly)" became Latin
Latin
Latin is an Italic language originally spoken in Latium and Ancient Rome. It, along with most European languages, is a descendant of the ancient Proto-Indo-European language. Although it is considered a dead language, a number of scholars and members of the Christian clergy speak it fluently, and...
cupiō "desire" and "hundred" became Latin centum ; but "interrogative pronoun" became quō "how? where?". These branches are known as Centum branches, named after the Latin word for hundred.

A major isogloss in American English
American English
American English is a set of dialects of the English language used mostly in the United States. Approximately two-thirds of the world's native speakers of English live in the United States....
has been identified as the North
Inland Northern American English
The Inland North dialect of American English is spoken in a region that includes most of the cities along the Erie Canal and on the U.S. side of Great Lakes region, reaching approximately from Utica, New York to Green Bay, Wisconsin, as well as a corridor extending down across central Illinois from...
-Midland isogloss, which demarcates numerous linguistic features, including the Northern Cities vowel shift
Northern cities vowel shift
The Northern cities vowel shift is a chain shift in the sounds of some vowels in the dialect region of American English known as the Inland North.-Geography:...
: regions north of the line (including Western New York
Western New York
Western New York is the westernmost region of the state of New York. It includes the cities of Buffalo, Rochester, Niagara Falls, the surrounding suburbs, as well as the outlying rural areas of the Great Lakes lowlands, the Genesee Valley, and the Southern Tier. Some historians, scholars and others...
; Cleveland, Ohio
Cleveland, Ohio
Cleveland is a city in the U.S. state of Ohio and is the county seat of Cuyahoga County, the most populous county in the state. The city is located in northeastern Ohio on the southern shore of Lake Erie, approximately west of the Pennsylvania border...
; lower Michigan
Lower Peninsula of Michigan
The Lower Peninsula of Michigan is the southern of the two major landmasses of the U.S. state of Michigan. It is surrounded by water on all sides except its southern border, which it shares with Ohio and Indiana. Geographically, the Lower Peninsula has a recognizable shape that many people...
; northern Illinois
Illinois
Illinois is the fifth-most populous state of the United States of America, and is often noted for being a microcosm of the entire country. With Chicago in the northeast, small industrial cities and great agricultural productivity in central and northern Illinois, and natural resources like coal,...
; and eastern Wisconsin
Wisconsin
Wisconsin is a U.S. state located in the north-central United States and is part of the Midwest. It is bordered by Minnesota to the west, Iowa to the southwest, Illinois to the south, Lake Michigan to the east, Michigan to the northeast, and Lake Superior to the north. Wisconsin's capital is...
) have the shift, while regions south of the line (including Pennsylvania
Pennsylvania
The Commonwealth of Pennsylvania is a U.S. state that is located in the Northeastern and Mid-Atlantic regions of the United States. The state borders Delaware and Maryland to the south, West Virginia to the southwest, Ohio to the west, New York and Ontario, Canada, to the north, and New Jersey to...
, central and southern Ohio
Ohio
Ohio is a Midwestern state in the United States. The 34th largest state by area in the U.S.,it is the 7th‑most populous with over 11.5 million residents, containing several major American cities and seven metropolitan areas with populations of 500,000 or more.The state's capital is Columbus...
, and most of Indiana
Indiana
Indiana is a US state, admitted to the United States as the 19th on December 11, 1816. It is located in the Midwestern United States and Great Lakes Region. With 6,483,802 residents, the state is ranked 15th in population and 16th in population density. Indiana is ranked 38th in land area and is...
) do not.

Such features can be used as data of fundamental importance for the purposes of linguistic classification.

For example, a distinguishing feature of the ancient Old Hebrew script
Hebrew alphabet
The Hebrew alphabet , known variously by scholars as the Jewish script, square script, block script, or more historically, the Assyrian script, is used in the writing of the Hebrew language, as well as other Jewish languages, most notably Yiddish, Ladino, and Judeo-Arabic. There have been two...
(i.e., Iron Age
Iron Age
The Iron Age is the archaeological period generally occurring after the Bronze Age, marked by the prevalent use of iron. The early period of the age is characterized by the widespread use of iron or steel. The adoption of such material coincided with other changes in society, including differing...
Old Hebrew script) is the fact that the letters

bet, dalet, ayin, and resh do not have an open head, while Aramaic
Aramaic language
Aramaic is a group of languages belonging to the Afroasiatic language phylum. The name of the language is based on the name of Aram, an ancient region in central Syria. Within this family, Aramaic belongs to the Semitic family, and more specifically, is a part of the Northwest Semitic subfamily,...
of the same period has open-headed forms. Similarly, the bet of Old Hebrew has a distinctive stance (namely, leans to the right), while the bet of the Aramaic and Phoenician script
Phoenician alphabet
The Phoenician alphabet, called by convention the Proto-Canaanite alphabet for inscriptions older than around 1050 BC, was a non-pictographic consonantal alphabet, or abjad. It was used for the writing of Phoenician, a Northern Semitic language, used by the civilization of Phoenicia...
series has a different stance (namely, both of these lean to the left).

The term isogloss (Ancient Greek ísos "equal, similar" and glōssa "tongue, dialect, language") is inspired by contour line
Contour line
A contour line of a function of two variables is a curve along which the function has a constant value. In cartography, a contour line joins points of equal elevation above a given level, such as mean sea level...
s or isopleths such as isobar. However, the isogloss separates rather than connects points of equal language. Consequently, it has been proposed that the term heterogloss ( héteros "other") be used instead.