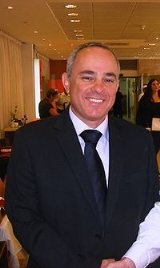 Encyclopedia
Yuval Steinitz is an Israel
Israel
The State of Israel is a parliamentary republic located in the Middle East, along the eastern shore of the Mediterranean Sea...
i academic and politician who has been a Knesset
Knesset
The Knesset is the unicameral legislature of Israel, located in Givat Ram, Jerusalem.-Role in Israeli Government :The legislative branch of the Israeli government, the Knesset passes all laws, elects the President and Prime Minister , approves the cabinet, and supervises the work of the government...
member for Likud
Likud
Likud is the major center-right political party in Israel. It was founded in 1973 by Menachem Begin in an alliance with several right-wing and liberal parties. Likud's victory in the 1977 elections was a major turning point in the country's political history, marking the first time the left had...
since 1999. He is now the Finance Minister of Israel.

Yuval Steinitz was born and raised on moshav
Moshav
Moshav is a type of Israeli town or settlement, in particular a type of cooperative agricultural community of individual farms pioneered by the Labour Zionists during the second aliyah...
Ramot HaShavim
Ramot HaShavim
Ramot HaShavim is a Jewish village in central Israel and was founded by German immigrants to Israel. Located between Hod HaSharon and Ra'anana and covering around 2,300 dunams, it falls under the jurisdiction of Drom HaSharon Regional Council. In 2007 it had a population of 1,300.It was...
. He studied in the biology track at Katznelson High School in Kfar Sava. He was expelled for refusing to sign a letter promising to stop his argumentative behavior in class, and completed his bagrut
Bagrut
Te'udat Bagrut is the official Israeli matriculation certificate. The bagrut is similar to the British A-levels, German Abitur, French Baccalauréat, and Austrian Matura...
externally. He did his army service as an infantry soldier in the Golani Brigade
Golani Brigade
The Golani Brigade is an Israeli infantry brigade that is subordinated to the 36th Division and traditionally associated with the Northern Command. Its symbol is a green tree on a yellow background, and its soldiers wear a brown beret. It is one of the most highly decorated infantry units in the...
of the Israeli Defense Forces. As a reservist in the Alexandroni Brigade
Alexandroni Brigade
The Alexandroni Brigade is an Israel Defense Forces brigade that fought in the 1948 Arab-Israeli war. Along with the 7th Armoured Brigade both units had 139 killed during the first battle of Latrun - Operation Ben Nun Alef .The unit is currently a reserve unit.-Katz controversy:In 1998, Teddy Katz...
, he was wounded during the Lebanon War
Lebanon War
The term Lebanon War can refer to any of the following wars, fought in Lebanon:*Lebanese Civil War *Hundred Days' War 1978 *1982 Lebanon War...
. His higher education began at the Hebrew University of Jerusalem
Hebrew University of Jerusalem
The Hebrew University of Jerusalem ; ; abbreviated HUJI) is Israel's second-oldest university, after the Technion – Israel Institute of Technology. The Hebrew University has three campuses in Jerusalem and one in Rehovot. The world's largest Jewish studies library is located on its Edmond J...
, where he obtained a BA and an MA in Philosophy.

His doctoral thesis, entitled From A Rational Point of View was completed at the Cohn Institute for the History and Philosophy of Science and Ideas at Tel Aviv University
Tel Aviv University
Tel Aviv University is a public university located in Ramat Aviv, Tel Aviv, Israel. With nearly 30,000 students, TAU is Israel's largest university.-History:...
. Steinitz was awarded the Alon Scholarship for his work. He continued his research at the University of Haifa
University of Haifa
The University of Haifa is a university in Haifa, Israel.The University of Haifa was founded in 1963 by Haifa mayor Abba Hushi, to operate under the academic auspices of the Hebrew University of Jerusalem....
, were he worked as a senior lecturer until entering the Knesset
Knesset
The Knesset is the unicameral legislature of Israel, located in Givat Ram, Jerusalem.-Role in Israeli Government :The legislative branch of the Israeli government, the Knesset passes all laws, elects the President and Prime Minister , approves the cabinet, and supervises the work of the government...
in 1999.
While at Haifa University, Steinitz published articles on military strategy and tactics in various periodicals, including the IDF journal Marachot. At the age of 29, he published his book Invitation to Philosophy, which became the best-selling philosophy text in Israel and was reprinted 40 times.

Steinitz's political involvement began in the 1980s when he joined Peace Now. He was injured during a rally in Jerusalem in 1983, when a right-wing extremist hurled a hand-grenade into the crowd, killing peace activist Emil Grunzweig
Emil Grunzweig
Emil Grunzweig was an Israeli teacher and peace activist affiliated with the Peace Now movement. He became an icon of the Israeli left after he was killed by a grenade thrown at a peace rally in Jerusalem in 1983.-Biography:Emil Grunzweig was born in Cluj in Transylvania, Romania...
.

However, his objections to the Oslo Accords
Oslo Accords
The Oslo Accords, officially called the Declaration of Principles on Interim Self-Government Arrangements or Declaration of Principles , was an attempt to resolve the ongoing Palestinian-Israeli conflict...
led him into the Likud camp. In the 1999 elections he was twentieth on the Likud list, but the party won only 19 seats. When Netanyahu resigned in the wake of his electoral defeat, Steinitz replaced him as next in line. During his first term in the Knesset, Steinitz served as chairman of the Subcommittee for Defense, Planning and Policy, and a member of the Foreign Affairs and Defense Committee
Foreign Affairs and Defense Committee
The Foreign Affairs and Defense Committee is a permanent Knesset committee which oversees key Foreign and Defense areas, including the drafting of legislation, supervision over related government ministries and the approval of their budgests...
and the Constitution Law and Courts Committee.

After retaining his seat in the 2003 elections, he was elected to chair the Foreign Affairs and Defense Committee, turning it into one of the most serious and influential bodies in the Knesset. During his second term, he also chaired the Subcommittee for Intelligence and Secret Services, the Committee for the examination of the Intelligence Services Following the War in Iraq, and co-chaired the Joint Security Committee Between the Knesset and the US Congress, alongside American Senator Jon Kyl
Jon Kyl
Jon Llewellyn Kyl is the junior U.S. Senator from Arizona and the Senate Minority Whip, the second-highest position in the Republican Senate leadership. In 2010 he was recognized by Time magazine as one of the 100 most influential people in the world for his persuasive role in the Senate.The son...
.

After re-election in 2006, he continued to co-chair the Joint Security Committee Between the Knesset and the US Congress, and also chaired the Subcommittee for the State of Alert and Field Security and the Sub-Committee on Intelligence & Secret Services, whilst continuing to be a member of the Foreign Affairs and Defense Committee and the Law and Courts Committee.

He retained his seat in the 2009 elections
Israeli legislative election, 2009
Elections for the 18th Knesset were held in Israel on 10 February 2009. These elections became necessary due to the resignation of Prime Minister Ehud Olmert as leader of the Kadima party, and the failure of his successor, Tzipi Livni, to form a coalition government...
after winning ninth place on the Likud list. He was appointed finance minister in Benjamin Netanyahu
Benjamin Netanyahu
Benjamin "Bibi" Netanyahu is the current Prime Minister of Israel. He serves also as the Chairman of the Likud Party, as a Knesset member, as the Health Minister of Israel, as the Pensioner Affairs Minister of Israel and as the Economic Strategy Minister of Israel.Netanyahu is the first and, to...
's government.

He was the first Finance Minister of Israel to submit to the Knesset a two-year budget, instead of the until-then customary one-year budget. This move generated some controversy, with some accusing it of decreasing government transparency and others praising it for its greater efficiency.

In March 2011 the Knesset passed the "Sheshinski Bill", a statute enacting the conclusions of a report by a commission headed by Professor Eitan Sheshinski. The commission wad appointed b Steinitz who lobbied the legislature heavily for the adoption of the bill.

In 2011, he ordered tax and customs funds collected by Israel on behalf of the Palestinian Authority to be withheld following a unity deal between Fatah
Fatah
Fataḥ is a major Palestinian political party and the largest faction of the Palestine Liberation Organization , a multi-party confederation. In Palestinian politics it is on the left-wing of the spectrum; it is mainly nationalist, although not predominantly socialist. Its official goals are found...
and Hamas
Hamas
Hamas is the Palestinian Sunni Islamic or Islamist political party that governs the Gaza Strip. Hamas also has a military wing, the Izz ad-Din al-Qassam Brigades...
.

Steinitz opposed the disengagement plan
Israel's unilateral disengagement plan
Israel's unilateral disengagement plan , also known as the "Disengagement plan", "Gaza expulsion plan", and "Hitnatkut", was a proposal by Israeli Prime Minister Ariel Sharon, adopted by the government on June 6, 2004 and enacted in August 2005, to evict all Israelis from the Gaza Strip and from...
in 2005, critiquing both its perceived objectives and logistic implementation. He was particularly concerned about the IDF's intention to transfer the Philadelphi Route
Philadelphi Route
The Philadelphi Route refers to a narrow strip of land, 14 km in length, situated along the border between Gaza Strip and Egypt. Under the provisions of the Israeli-Egyptian peace treaty of 1979, the buffer zone was controlled and patrolled by Israeli forces. After the 1995 Oslo Accords,...
, a strategic buffer zone between Egypt and the Gaza Strip
Gaza Strip
thumb|Gaza city skylineThe Gaza Strip lies on the Eastern coast of the Mediterranean Sea. The Strip borders Egypt on the southwest and Israel on the south, east and north. It is about long, and between 6 and 12 kilometres wide, with a total area of...
, to the Egyptians. He claimed that Egypt would not stop the arms smuggling by Palestinian terrorist groups.

He has campaigned for heightened awareness of the Iranian nuclear threat, lobbying at home and abroad to ensure that Iran does not become a nuclear power.

In 2008, when Israel refused permission for Palestinian Fulbright students to leave Gaza
Gaza
Gaza , also referred to as Gaza City, is a Palestinian city in the Gaza Strip, with a population of about 450,000, making it the largest city in the Palestinian territories.Inhabited since at least the 15th century BC,...
and study in the United States, Steinitz supported this action. He told the New York Times: “We are fighting the regime in Gaza that does its utmost to kill our citizens and destroy our schools and our colleges. So I don’t think we should allow students from Gaza to go anywhere. Gaza is under siege, and rightly so, and it is up to the Gazans to change the regime or its behavior.”

Steinitz has publicly stated that he is against releasing terrorists convicted of murder in a prisoner exchange deal for Gilad Shalit
Gilad Shalit
Gilad Shalit is an Israeli – French citizen and Israel Defense Forces soldier. On 25 June 2006, he was captured inside Israel by Hamas militants in a cross-border raid via underground tunnels near the border with Gaza. The Hamas militants held him for over five years, until he was released on...
.