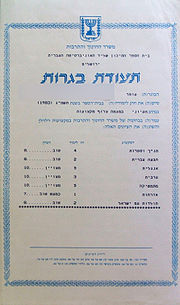 Te'udat Bagrut is the official Israeli matriculation
Matriculation
Matriculation, in the broadest sense, means to be registered or added to a list, from the Latin matricula – little list. In Scottish heraldry, for instance, a matriculation is a registration of armorial bearings...
certificate. The bagrut is similar to the British
United Kingdom
The United Kingdom of Great Britain and Northern IrelandIn the United Kingdom and Dependencies, other languages have been officially recognised as legitimate autochthonous languages under the European Charter for Regional or Minority Languages...
A-levels, German
Germany
Germany , officially the Federal Republic of Germany , is a federal parliamentary republic in Europe. The country consists of 16 states while the capital and largest city is Berlin. Germany covers an area of 357,021 km2 and has a largely temperate seasonal climate...
Abitur
Abitur
Abitur is a designation used in Germany, Finland and Estonia for final exams that pupils take at the end of their secondary education, usually after 12 or 13 years of schooling, see also for Germany Abitur after twelve years.The Zeugnis der Allgemeinen Hochschulreife, often referred to as...
, French
France
The French Republic , The French Republic , The French Republic , (commonly known as France , is a unitary semi-presidential republic in Western Europe with several overseas territories and islands located on other continents and in the Indian, Pacific, and Atlantic oceans. Metropolitan France...
Baccalauréat
Baccalauréat
The baccalauréat , often known in France colloquially as le bac, is an academic qualification which French and international students take at the end of the lycée . It was introduced by Napoleon I in 1808. It is the main diploma required to pursue university studies...
, and Austria
Austria
Austria , officially the Republic of Austria , is a landlocked country of roughly 8.4 million people in Central Europe. It is bordered by the Czech Republic and Germany to the north, Slovakia and Hungary to the east, Slovenia and Italy to the south, and Switzerland and Liechtenstein to the...
n Matura
Matura
Matura or a similar term is the common name for the high-school leaving exam or "maturity exam" in various countries, including Albania, Austria, Bosnia and Herzegovina, Bulgaria, Croatia, the Czech Republic, Hungary, Italy, Kosovo, Liechtenstein, Macedonia, Montenegro, Poland, Serbia,...
. The certificate is given to the student after passing written (and in some cases oral) exams, and obtaining a passing mark (55% or higher) in each exam.

The following subjects are compulsory for obtaining the certificate:


For most subject matter exams, the student may choose the level of difficulty he or she would like to be tested under. This level of difficulty is expressed as "units of study" (yehidot limud), from 1 (least difficult) to 5 (most difficult). In order to receive a "full" matriculation certificate, the student must take and pass at least one subject matter exam at the 5-unit level of difficulty and earn a total of at least 21 combined study units in all bagrut exams taken. Correspondingly, the make up of a student's classes during his or her high school years is matched to the student's expected units of study they will test in their bagrut exams. So for example, a student who is planning to take the 5-unit mathematics exam will take mathematics courses specifically designed for a 5-unit level of difficulty all throughout their high school career.

A copy of the 2010 mathematics exam (in the four and five units levels) was leaked to students, but a teacher reported it to authorities and all tests were replaced.
The source of this article is wikipedia, the free encyclopedia.  The text of this article is licensed under the GFDL.