Encyclopedia
The 16th arrondissement of Paris (also known as "Arrondissement de Passy") is one of the 20 arrondissements
Arrondissements of Paris
The city of Paris is divided into twenty arrondissements municipaux administrative districts, more simply referred to as arrondissements . These are not to be confused with departmental arrondissements, which subdivide the 101 French départements...
(administrative districts) of Paris
Paris
Paris is the capital and largest city in France, situated on the river Seine, in northern France, at the heart of the Île-de-France region...
, the capital city of France
France
The French Republic , The French Republic , The French Republic , (commonly known as France , is a unitary semi-presidential republic in Western Europe with several overseas territories and islands located on other continents and in the Indian, Pacific, and Atlantic oceans. Metropolitan France...
. It includes a concentration of museums between the Place du Trocadero
Trocadero
The stylish connotations of the name "Trocadero" derive from the Battle of Trocadero in southern Spain, a citadel held by liberal Spanish forces that was taken by the French troops sent by Charles X, in 1823...
and the Place d'Iéna.

Situated on the right bank
Rive Droite
La Rive Droite is most associated with the river Seine in central Paris. Here the river flows roughly westwards, cutting the city into two: looking downstream, the northern bank is to the right, and the southern bank is to the left....
of the River Seine
Seine
The Seine is a -long river and an important commercial waterway within the Paris Basin in the north of France. It rises at Saint-Seine near Dijon in northeastern France in the Langres plateau, flowing through Paris and into the English Channel at Le Havre . It is navigable by ocean-going vessels...
, this arrondissement—which includes the mainly residential districts of Auteuil
Auteuil-Neuilly-Passy
Auteuil and Passy are part of the 16th arrondissement of Paris. They are located near the Bois de Boulogne and the suburb of Neuilly-sur-Seine too....
and Passy
Passy
Passy is an area of Paris, France, located in the XVIe arrondissement, on the Right Bank. It is traditionally home to many of the city's wealthiest residents.Passy was formerly a commune...
-- is home to a large number of diplomatic embassies
Diplomatic mission
A diplomatic mission is a group of people from one state or an international inter-governmental organisation present in another state to represent the sending state/organisation in the receiving state...
and is also the location of the famous Avenue Foch
Avenue Foch
Avenue Foch is a street in Paris, France, named after Ferdinand Foch in 1929. It was previously named Avenue du Bois de Boulogne. It is one of the most prestigious streets in Paris, and one of the most expensive addresses in the world, home to many grand palaces, including ones belonging to the...
, the widest street in Paris and home to many of the City's wealthy foreign residents.

With its ornate 19th century buildings, large avenues, prestigious schools and museums and various parks, the arrondissement has long been known as one of French high society's favorite places of residence (comparable to New York's Upper East Side
Upper East Side
The Upper East Side is a neighborhood in the borough of Manhattan in New York City, between Central Park and the East River. The Upper East Side lies within an area bounded by 59th Street to 96th Street, and the East River to Fifth Avenue-Central Park...
or London's Chelsea & Kensington) to such an extent that the phrase "le 16e" has been associated with great wealth in French popular culture. Indeed, the 16th arrondissement is France's 4th richest district for average household income, only fourth to the 8th, 7th and 6th arrondissements; with Neuilly-sur-Seine
Neuilly-sur-Seine
Neuilly-sur-Seine is a commune in the western suburbs of Paris, France. It is located from the center of Paris.Although Neuilly is technically a suburb of Paris, it is immediately adjacent to the city and directly extends it. The area is composed of mostly wealthy, select residential...
, they are collectively referred to as Paris Ouest
Paris Ouest
Paris Ouest is an expression referring to the wealthiest and most prestigious residential area of France.Located in the central and western part of Paris, it roughly follows Paris' Voie Royale or Axe historique : a line of monuments, buildings and thoroughfares that extends from the former royal...
: the most affluent and prestigious residential area in France.

The 16th arrondissement hosts several large sporting venues, including: the Parc des Princes
Parc des Princes
The Parc des Princes is an all-seater football stadium located in the southwest of Paris, France. The venue, with a seating capacity of 48,712 spectators, has been the home of French football club Paris Saint-Germain since 1974. The current Parc des Princes was inaugurated on 4 June 1972, endowed...
, which is the stadium where Paris Saint-Germain football club plays its home matches; Roland Garros Stadium
Stade Roland Garros
Le Stade de Roland Garros is a tennis venue located in Paris, France. It hosts the French Open tennis tournament , a Grand Slam event played annually in May and June. The facility was constructed in 1928 to host France's first defense of the Davis Cup...
, where the French Open tennis championships are held; and Stade Jean-Bouin
Stade Jean-Bouin
Stade Jean-Bouin is a multi-purpose stadium in the 16th arrondissement of Paris, France. The facility, across the street from the much larger Parc des Princes, is currently used mostly for rugby union matches and is the home stadium of Stade Français. Through 2006, it hosted the annual Paris Sevens...
, home to the Stade Français rugby union club. The Bois de Boulogne
Bois de Boulogne
The Bois de Boulogne is a park located along the western edge of the 16th arrondissement of Paris, near the suburb of Boulogne-Billancourt and Neuilly-sur-Seine...
, the second-largest public park in Paris (behind only the Bois de Vincennes
Bois de Vincennes
The Bois de Vincennes is a park in the English landscape manner to the east of Paris. The park is named after the nearby town of Vincennes....
), is also located in this arrondissement.

The 16th arrondissement is commonly thought to be one of the richest parts of Paris (see Auteuil-Neuilly-Passy
Auteuil-Neuilly-Passy
Auteuil and Passy are part of the 16th arrondissement of Paris. They are located near the Bois de Boulogne and the suburb of Neuilly-sur-Seine too....
), and features some of the most expensive real estate
Real estate
In general use, esp. North American, 'real estate' is taken to mean "Property consisting of land and the buildings on it, along with its natural resources such as crops, minerals, or water; immovable property of this nature; an interest vested in this; an item of real property; buildings or...
in France including the famous Auteuil "villas", heirs to 19th century high society
High society
High society may refer to:* Upper class, group of people at the top of a social hierarchy* Gentry, origin Old French genterie, from gentil ‘high-born, noble* High society , social grouping which socialites may be affiliated with....
country houses, they are exclusive gated communities with huge houses surrounding by gardens which is extremely rare in Paris. It is also the only arrondissement in Paris to be divided into two separate postal codes. The southern part of the arrondissement carries a postal code of 75016, while the northern part has the code of 75116.

Four Fortune Global 500
Fortune Global 500
The Fortune Global 500 is a ranking of the top 500 corporations worldwide as measured by revenue. The list is compiled and published annually by Fortune magazine....
have their head office
Head Office
Head Office is a 1985 American comedy film, produced by HBO Pictures in association with Silver Screen Partners. It stars Judge Reinhold, Eddie Albert, Lori-Nan Engler, Jane Seymour, Richard Masur, Michael O'Donoghue, Ron Frazier, Merritt Butrick and was directed and written by Ken...
s in this arrondissement: PSA Peugeot Citroën
PSA Peugeot Citroën
PSA Peugeot Citroën is a French manufacturer of automobiles and motorcycles sold under the Peugeot and Citroën marques. Headquartered in the 16th arrondissement of Paris, PSA is the second largest automaker based in Europe and the number eight in the world.-History:In December 1974 Peugeot S.A....
, PPR
PPR (company)
PPR is a French multinational holding company specializing in retail shops and luxury brands. The company was founded in 1963 by the businessman François Pinault and is now run by his son François-Henri Pinault. It is quoted on Euronext Paris and is a constituent of the CAC 40 index...
, Lafarge
Lafarge
Lafarge is a French industrial company specialising in four major products: cement, construction aggregates, concrete and gypsum wallboard. In 2010 the company was the world's second-largest cement manufacturer by mass shipped behind Holcim.-History:...
, and Veolia. In addition Lagardère
Lagardère
Lagardère may refer to:* Lagardère Group* Jean-Luc Lagardère* Arnaud Lagardère* Lagardère, a commune of the Gers département, in France...
has its headquarters in this arrondissement.

In one of the opening scenes of the 1965 James Bond
James Bond
James Bond, code name 007, is a fictional character created in 1953 by writer Ian Fleming, who featured him in twelve novels and two short story collections. There have been a six other authors who wrote authorised Bond novels or novelizations after Fleming's death in 1964: Kingsley Amis,...
film Thunderball
Thunderball (film)
Thunderball is the fourth spy film in the James Bond series starring Sean Connery as the fictional MI6 agent James Bond. It is an adaptation of the novel of the same name by Ian Fleming, which in turn was based on an original screenplay by Jack Whittingham...
, character Emilio Largo
Emilio Largo
Emilio Largo is a fictional character and the main antagonist from the James Bond novel Thunderball. In the novel he is depicted, according to the British stereotypes about Italians, as a large, heavyset, olive-skinned, powerful man exuding animal charm, with the profile of a Roman emperor, and...
is seen arriving at 'Centre international d'assistance aux personnes déplacées' ('The International Brotherhood for the Assistance of Stateless Persons'). This scene was shot on Avenue d'Eylau in the 16th arrondissement. 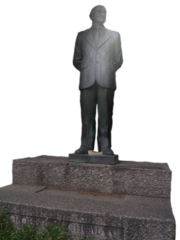