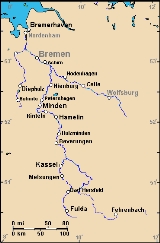 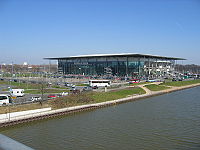 Wolfsburg is a town in Lower Saxony
Lower Saxony
Lower Saxony is a German state situated in north-western Germany and is second in area and fourth in population among the sixteen states of Germany...
, Germany
Germany
Germany , officially the Federal Republic of Germany , is a federal parliamentary republic in Europe. The country consists of 16 states while the capital and largest city is Berlin. Germany covers an area of 357,021 km2 and has a largely temperate seasonal climate...
. It is located on the River Aller
Aller
The Aller is a river, long, in the states of Saxony-Anhalt and Lower Saxony in Germany. It is a right-hand, and hence eastern, tributary of the River Weser and is also its largest tributary. Its last form the Lower Aller federal waterway...
northeast of Braunschweig
Braunschweig
Braunschweig , is a city of 247,400 people, located in the federal-state of Lower Saxony, Germany. It is located north of the Harz mountains at the farthest navigable point of the Oker river, which connects to the North Sea via the rivers Aller and Weser....
(Brunswick), and is mainly notable as the headquarters
Headquarters
Headquarters denotes the location where most, if not all, of the important functions of an organization are coordinated. In the United States, the corporate headquarters represents the entity at the center or the top of a corporation taking full responsibility managing all business activities...
of Volkswagen AG
Volkswagen Group
Volkswagen Group is a German multinational automobile manufacturing group. , Volkswagen was ranked as the world’s third largest motor vehicle manufacturer and Europe's largest....
. Wolfsburg is bordered by the districts of Gifhorn
Gifhorn (district)
-Geography:The district is located at the border of Saxony-Anhalt and extends from the southern edge of the Lüneburg Heath in the north to the suburbs of Braunschweig and Wolfsburg in the south. The Aller River enters the district in the southeast, runs through the town of Gifhorn, is joined by...
and Helmstedt
Helmstedt (district)
Helmstedt is a district in Lower Saxony, Germany. It is bounded by the district of Wolfenbüttel, the City of Braunschweig, the District of Gifhorn, the City of Wolfsburg and the State of Saxony-Anhalt .-Geography:The district is bounded by the Elm in the west and the Lappwald in the east...
.

Wolfsburg was founded on 1 July 1938 as the Nazis' Stadt des KdF-Wagens bei Fallersleben (City of the KdF
Kraft durch Freude
Kraft durch Freude was a large state-controlled leisure organization in Nazi Germany. It was a part of the German Labour Front , the national German labour organization at that time...
Car at Fallersleben
Fallersleben
Fallersleben is a district in the City of Wolfsburg, Lower Saxony, Germany, with a population of 11,269 . The village of Fallersleben was first mentioned in 942 under the name of Valareslebo. Fallersleben became a city in 1929, and was incorporated into Wolfsburg in 1972. Before 1972, it belonged...
), a planned town around the village of Fallersleben in order to house the workers of the newly opened Volkswagen
Volkswagen
Volkswagen is a German automobile manufacturer and is the original and biggest-selling marque of the Volkswagen Group, which now also owns the Audi, Bentley, Bugatti, Lamborghini, SEAT, and Škoda marques and the truck manufacturer Scania.Volkswagen means "people's car" in German, where it is...
factories, which were built to assemble the Volkswagen Beetle
Volkswagen Beetle
The Volkswagen Type 1, widely known as the Volkswagen Beetle or Volkswagen Bug, is an economy car produced by the German auto maker Volkswagen from 1938 until 2003...
"people's car" and remain there today, although Beetle production finished there in 1978 (when it was transferred to Mexico
Mexico
The United Mexican States , commonly known as Mexico , is a federal constitutional republic in North America. It is bordered on the north by the United States; on the south and west by the Pacific Ocean; on the southeast by Guatemala, Belize, and the Caribbean Sea; and on the east by the Gulf of...
for the final 25 years).

During World War II
World War II
World War II, or the Second World War , was a global conflict lasting from 1939 to 1945, involving most of the world's nations—including all of the great powers—eventually forming two opposing military alliances: the Allies and the Axis...
, there were also military cars, airplanes and other military equipment built, mainly by forced workers
Forced labor in Germany during World War II
The use of forced labour in Nazi Germany and throughout German-occupied Europe during World War II took place on an unprecedented scale. It was a vital part of the German economic exploitation of conquered territories. It also contributed to the mass extermination of populations in German-occupied...
and POWs
Prisoner of war
A prisoner of war or enemy prisoner of war is a person, whether civilian or combatant, who is held in custody by an enemy power during or immediately after an armed conflict...
at these factories. The train station of Wolfsburg was built on the order of Adolf Hitler in order to transport or receive prefabricated parts for military equipment.

In 1945, the city was renamed Wolfsburg after the castle of the same name located in the city, which was founded about 1300 on the bank of the Aller
Aller
The Aller is a river, long, in the states of Saxony-Anhalt and Lower Saxony in Germany. It is a right-hand, and hence eastern, tributary of the River Weser and is also its largest tributary. Its last form the Lower Aller federal waterway...
river. Today, there is another castle at the place, which was built after 1600. In 1951, Wolfsburg was separated from the District of Gifhorn, and became an urban district. In November 2003, Wolfsburg was renamed "Golfsburg" for one week to celebrate the 5th generation
Volkswagen Golf Mk5
The fifth generation Volkswagen Golf Mk5 , built on the Volkswagen Group A5 platform was unveiled at the Frankfurt Motor Show in October 2003 and went on sale in Europe one month later. To commemorate this, Wolfsburg was renamed "Golfsburg" for a week. It reached North American markets in June...
of the Volkswagen Golf
Volkswagen Golf
The Volkswagen Golf is a small family car manufactured by Volkswagen since 1974 and marketed worldwide across six generations, in various body configurations and under various nameplates – as the Volkswagen Rabbit in the United States and Canada , and as the Volkswagen Caribe in Mexico .The...
.

The centre of Wolfsburg lacks historical buildings, and the sights include new attractions like the Autostadt
Autostadt
The Autostadt is a visitor attraction adjacent to the Volkswagen factory in Wolfsburg, Germany, with a prime focus on automobiles. It features a museum, feature pavilions for the principal automobile brands in the Volkswagen Group, a customer centre where customers can pick up new cars, and take a...
(a huge open air museum dedicated to automobile
Automobile
An automobile, autocar, motor car or car is a wheeled motor vehicle used for transporting passengers, which also carries its own engine or motor...
s, owned and operated by Volkswagen
Volkswagen
Volkswagen is a German automobile manufacturer and is the original and biggest-selling marque of the Volkswagen Group, which now also owns the Audi, Bentley, Bugatti, Lamborghini, SEAT, and Škoda marques and the truck manufacturer Scania.Volkswagen means "people's car" in German, where it is...
), a planetarium
Planetarium
A planetarium is a theatre built primarily for presenting educational and entertaining shows about astronomy and the night sky, or for training in celestial navigation...
, the Phaeno Science Center
Phaeno Science Center
The Phaeno Science Center is an interactive science center in Wolfsburg, Germany, completed in 2005. Phaeno arose from progressive urban planning by the City of Wolfsburg. In 1998 City officials were developing a plot of vacant, public land immediately adjacent to Wolfsburg's railway station and...
, the largest hands-on science museum in Germany, and an excellent private art museum (Kunstmuseum Wolfsburg) specialised in modern and contemporary art.

The old part of the town Alt Wolfsburg shows some manor buildings in traditional framework style.

With the opening in 2000 of Autostadt and that of Phaeno, as well as restaurants and a Ritz Carlton Hotel, tourism increased.

The most famous professional sports club in the town is VfL Wolfsburg
VfL Wolfsburg
VfL Wolfsburg is a professional German association football club based in Wolfsburg, Lower Saxony, who play in the Bundesliga football competition. Wolfsburg have won the Bundesliga once in their history, in the 2008–09 season, and were DFB-Pokal runners-up in 1995. The current head coach is Felix...
, a football
Football (soccer)
Association football, more commonly known as football or soccer, is a sport played between two teams of eleven players with a spherical ball...
club that was established in 1945. They won the 2009 Fußball-Bundesliga
Fußball-Bundesliga
The Fußball-Bundesliga is a professional association football league in Germany. At the top of Germany's football league system, it is the country's primary football competition. It is contested by 18 teams and operates on a system of promotion and relegation with the 2. Bundesliga...
. Ice hockey team EHC Wolfsburg Grizzly Adams
EHC Wolfsburg Grizzly Adams
EHC Wolfsburg Grizzly Adams are a professional ice hockey club of the German professional ice hockey league Deutsche Eishockey Liga. They play their games at Eisarena in Wolfsburg...
,which since 2007 has made it to a leading position in the German ice-hockey league, is also based in the town. The Volkswagen Challenger
Volkswagen Challenger
The Volkswagen Challenger is a professional tennis tournament played on indoor carpet courts. It is currently part of the Association of Tennis Professionals Challenger Tour. It is held annually at the Tennisclub Grün-Gold Wolfsburg in Wolfsburg, Germany, since 1993.-Singles:-Doubles:Ŀ-External...
tennis tournament has been held annually in the town since 1993.

Wolfsburg is twinned
Town twinning
Twin towns and sister cities are two of many terms used to describe the cooperative agreements between towns, cities, and even counties in geographically and politically distinct areas to promote cultural and commercial ties.- Terminology :...
with the following towns: