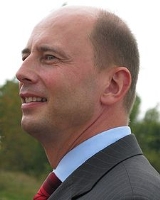 Encyclopedia
Wolfgang Tiefensee is a German
Germany
Germany , officially the Federal Republic of Germany , is a federal parliamentary republic in Europe. The country consists of 16 states while the capital and largest city is Berlin. Germany covers an area of 357,021 km2 and has a largely temperate seasonal climate...
SPD
Social Democratic Party of Germany
The Social Democratic Party of Germany is a social-democratic political party in Germany...
politician. He was the Federal Minister for Transport, Building and Urban Development in the grand coalition
Grand coalition
A grand coalition is an arrangement in a multi-party parliamentary system in which the two largest political parties of opposing political ideologies unite in a coalition government...
cabinet led by Angela Merkel
Angela Merkel
Angela Dorothea Merkel is the current Chancellor of Germany . Merkel, elected to the Bundestag from Mecklenburg-Vorpommern, has been the chairwoman of the Christian Democratic Union since 2000, and chairwoman of the CDU-CSU parliamentary coalition from 2002 to 2005.From 2005 to 2009 she led a...
since November 22, 2005.

As mayor, he put great effort into Leipzig
Leipzig
Leipzig Leipzig has always been a trade city, situated during the time of the Holy Roman Empire at the intersection of the Via Regia and Via Imperii, two important trade routes. At one time, Leipzig was one of the major European centres of learning and culture in fields such as music and publishing...
's bid to host the 2012 Olympic Games. While Leipzig unexpectedly won the campaign to tender the German bid, the middle-sized city did not get past the first round of the international competition, which was in fact won by London
London
London is the capital city of :England and the :United Kingdom, the largest metropolitan area in the United Kingdom, and the largest urban zone in the European Union by most measures. Located on the River Thames, London has been a major settlement for two millennia, its history going back to its...
.

Wolfgang Tiefensee, whose father was the musician and conductor Siegfried Tiefensee
Siegfried Tiefensee
Siegfried Tiefensee was a German musician and conductor.Siegfried Tiefensee was born in Rastenburg, East Prussia, he started his artistic education in his early youth and learned piano, violin and composing...
, is also known for playing the cello
Cello
The cello is a bowed string instrument with four strings tuned in perfect fifths. It is a member of the violin family of musical instruments, which also includes the violin, viola, and double bass. Old forms of the instrument in the Baroque era are baryton and viol .A person who plays a cello is...
, a talent that he successfully incorporated into Leipzig's Olympic bid. His brother, Eberhard Tiefensee, is a Catholic
Roman Catholic Church
The Catholic Church, also known as the Roman Catholic Church, is the world's largest Christian church, with over a billion members. Led by the Pope, it defines its mission as spreading the gospel of Jesus Christ, administering the sacraments and exercising charity...
priest and professor of theology
Theology
Theology is the systematic and rational study of religion and its influences and of the nature of religious truths, or the learned profession acquired by completing specialized training in religious studies, usually at a university or school of divinity or seminary.-Definition:Augustine of Hippo...
at the University of Erfurt
University of Erfurt
The University of Erfurt is a public university located in Erfurt, Germany. Originally founded in 1379, the university was closed in 1816 for the next 177 years...
.
The source of this article is wikipedia, the free encyclopedia.  The text of this article is licensed under the GFDL.