Encyclopedia
Langeoog is one of the seven inhabited East Frisian Islands
East Frisian Islands
The East Frisian Islands are a chain of islands in the North Sea, off the coast of East Frisia in Lower Saxony, Germany. The islands extend for some from west to east between the mouths of the Ems and Jade / Weser rivers and lie about 3.5 to 10 km offshore...
at the edge of the Lower Saxon Wadden Sea
Wadden Sea
The Wadden Sea is an intertidal zone in the southeastern part of the North Sea. It lies between the coast of northwestern continental Europe and the range of Frisian Islands, forming a shallow body of water with tidal flats and wetlands. It is rich in biological diversity...
in the southern North Sea
North Sea
In the southwest, beyond the Straits of Dover, the North Sea becomes the English Channel connecting to the Atlantic Ocean. In the east, it connects to the Baltic Sea via the Skagerrak and Kattegat, narrow straits that separate Denmark from Norway and Sweden respectively...
, located between Baltrum
Baltrum
Baltrum is a barrier island off the coast of East Frisia , in Germany, and is a municipality in the district of Aurich, Lower Saxony. It is located in-between the chain of the seven inhabited East Frisian Islands...
Island (west), and Spiekeroog
Spiekeroog
Spiekeroog is one of the East Frisian Islands, off the North Sea coast of Germany. It is situated between Langeoog to its west, and Wangerooge to its east. The island belongs to the district of Wittmund, in Lower Saxony in Germany. The only village on the island is also called...
(east). It is also a municipality in the district of Wittmund
Wittmund (district)
Wittmund is a Landkreis in the northwestern part of Lower Saxony, Germany. It is situated in East Frisia, on the North Sea coast. Neighboring districts are Friesland, Leer and Aurich.-Geography:...
in Lower Saxony
Lower Saxony
Lower Saxony is a German state situated in north-western Germany and is second in area and fourth in population among the sixteen states of Germany...
, Germany
Germany
Germany , officially the Federal Republic of Germany , is a federal parliamentary republic in Europe. The country consists of 16 states while the capital and largest city is Berlin. Germany covers an area of 357,021 km2 and has a largely temperate seasonal climate...
. The name Langeoog means Long Island in the Low German
Low German
Low German or Low Saxon is an Ingvaeonic West Germanic language spoken mainly in northern Germany and the eastern part of the Netherlands...
dialect.

Langeoog's beach is 14 kilometres (8.7 mi) long. Langeoog's actual size depends on the level of tide
Tide
Tides are the rise and fall of sea levels caused by the combined effects of the gravitational forces exerted by the moon and the sun and the rotation of the Earth....
, which rises and falls about 2.5 metres (8.2 ft) in 6 hours.


Fresh water, where salt water is all around

Langeoog is — seen with the geologist's eye — nothing but sand. Rainwater that drips into the sand has a lower density than saltwater, which makes a kind of freshwater bubble float over the saltwater surrounding and deep under the island.

The beach and the dunes are eroded by the sea in the western part of the island. In the last 50 years Langeoog's western end has moved several hundred meters to the east. Things like this happen on every East Frisian island — some islands moved so far that the town had to be rebuilt several times. Every island except Juist
Juist
Juist is one of the seven inhabited East Frisian Islands at the edge of the Lower Saxon Wadden Sea in the southern North Sea, located between Borkum Island , Memmert Island and Norderney...
and Langeoog has large concrete groyne
Groyne
A groyne is a rigid hydraulic structure built from an ocean shore or from a bank that interrupts water flow and limits the movement of sediment. In the ocean, groynes create beaches, or avoid having them washed away by longshore drift. In a river, groynes prevent erosion and ice-jamming, which...
s at its western end.

Langeoog can be reached from Bensersiel port on the East Frisia
East Frisia
East Frisia or Eastern Friesland is a coastal region in the northwest of the German federal state of Lower Saxony....
n mainland by the ferries of the Langeoog Shipping Company Langeoog I, Langeoog II, Langeoog III and Langeoog IV. Langeoog ferries' schedule does not depend on the tide
Tide
Tides are the rise and fall of sea levels caused by the combined effects of the gravitational forces exerted by the moon and the sun and the rotation of the Earth....
, which is unusual among East Frisian ferries.

The port and the town are linked by a railway.

Langeoog also has an airport.

Only the fire department and ambulance service have standard motorised vehicles. The policemen and doctors get about on bicycles. Some companies (construction, drink delivery, post office, etc.) have electric cars. The post office and the shipping company have one electric car each. If one does not want to walk, one can rent a bicycle or take a horse carriage taxi.

Tourism is the main source of income for Langeoog's economy. There are guest rooms in almost all island buildings. There are also several hotels. The youth hostel is several kilometers outside the town.

The island's unpolluted air makes it popular with people who have respiratory problems. 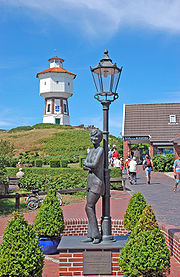 Singer-songwriter Lale Andersen
Lale Andersen
Lale Andersen was a German chanson singer-songwriter born in Bremerhaven, Germany. She is best known for her interpretation of the song "Lili Marleen" in 1939, which became tremendously popular on both sides during the Second World War.- Early life :She was born in Lehe and baptized Liese-Lotte...
, whose 1939 interpretation of the song Lili Marleen
Lili Marleen
"Lili Marleen" is a German love song which became popular during World War II.Written in 1915 during World War I, the poem was published under the title "Das Lied eines jungen Soldaten auf der Wacht" in 1937, and was first recorded by Lale Andersen in 1939 under the...
became tremendously popular during World War II
World War II
World War II, or the Second World War , was a global conflict lasting from 1939 to 1945, involving most of the world's nations—including all of the great powers—eventually forming two opposing military alliances: the Allies and the Axis...
, lived here for several years. Although she died in Vienna
Vienna
Vienna is the capital and largest city of the Republic of Austria and one of the nine states of Austria. Vienna is Austria's primary city, with a population of about 1.723 million , and is by far the largest city in Austria, as well as its cultural, economic, and political centre...
in 1972, she is buried on the island's dune cemetery. A bronze memorial in her honor has been erected on Langeoog.