Encyclopedia
Wismar (ˈvɪsmaʁ), is a small port and Hanseatic League
Hanseatic League
The Hanseatic League was an economic alliance of trading cities and their merchant guilds that dominated trade along the coast of Northern Europe...
town in northern Germany on the Baltic Sea
Baltic Sea
The Baltic Sea is a brackish mediterranean sea located in Northern Europe, from 53°N to 66°N latitude and from 20°E to 26°E longitude. It is bounded by the Scandinavian Peninsula, the mainland of Europe, and the Danish islands. It drains into the Kattegat by way of the Øresund, the Great Belt and...
, in the state of Mecklenburg-Vorpommern,
about 45 km due east of Lübeck
Lübeck
The Hanseatic City of Lübeck is the second-largest city in Schleswig-Holstein, in northern Germany, and one of the major ports of Germany. It was for several centuries the "capital" of the Hanseatic League and, because of its Brick Gothic architectural heritage, is listed by UNESCO as a World...
, and 30 km due north of Schwerin
Schwerin
Schwerin is the capital and second-largest city of the northern German state of Mecklenburg-Vorpommern. The population, as of end of 2009, was 95,041.-History:...
. Its natural harbour, located in the Bay of Wismar
Bay of Wismar
The Bay of Wismar or more commonly Wismar Bay or Wismarbucht is a well sheltered multi-sectioned bay in the southwestern Baltic Sea, in Germanys' Mecklenburg-Vorpommern, and is considered the south-central part of the much larger arm of the Baltic known as the Mecklenburg Bay — a long fingerlike...
is well-protected by a promontory. The population was 45,414 in March 2005, more than doubled from 21,902 in 1905. A former district-free town, it is the capital of the district of Nordwestmecklenburg
Nordwestmecklenburg
Nordwestmecklenburg is a Kreis in the north-western part of Mecklenburg-Vorpommern, Germany. It is situated on the coast of the Baltic Sea and borders on Schleswig-Holstein to the west...
since the September 2011 district reforms.

Representative of Hanseatic League city brick construction
Brick Gothic
Brick Gothic is a specific style of Gothic architecture common in Northern Europe, especially in Northern Germany and the regions around the Baltic Sea that do not have natural rock resources. The buildings are essentially built from bricks...
as well as the German brick churches, the city has been included in the UNESCO
UNESCO
The United Nations Educational, Scientific and Cultural Organization is a specialized agency of the United Nations...
list of World Heritage Sites since 2002.

The town was the setting of the 1922 vampire movie Nosferatu (in the film however, the town is named "Wisborg"). 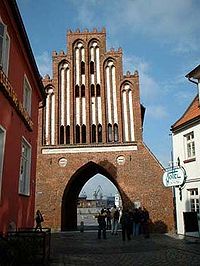 Founded by the Polabians as Vishemir and later settled by the Germans, Wismar is said to have received its civic rights in 1229, and came into the possession of Mecklenburg
Mecklenburg
Mecklenburg is a historical region in northern Germany comprising the western and larger part of the federal-state Mecklenburg-Vorpommern...
in 1301. In 1259 it had entered a pact with Lübeck and Rostock
Rostock
Rostock -Early history:In the 11th century Polabian Slavs founded a settlement at the Warnow river called Roztoc ; the name Rostock is derived from that designation. The Danish king Valdemar I set the town aflame in 1161.Afterwards the place was settled by German traders...
, in order to defend itself against the numerous Baltic sea pirates. This developed into the Hanseatic League
Hanseatic League
The Hanseatic League was an economic alliance of trading cities and their merchant guilds that dominated trade along the coast of Northern Europe...
. During the 13th and 14th centuries it was a flourishing Hanseatic town, with important woollen factories. Though a plague carried off 10,000 of the inhabitants in 1376, the town seems to have remained tolerably prosperous until the 16th century.

Under the Peace of Westphalia
Peace of Westphalia
The Peace of Westphalia was a series of peace treaties signed between May and October of 1648 in Osnabrück and Münster. These treaties ended the Thirty Years' War in the Holy Roman Empire, and the Eighty Years' War between Spain and the Dutch Republic, with Spain formally recognizing the...
in 1648 Wismar passed into the possession of Sweden, with a ruling house from which it acquired its name. Through Wismar and the other dominions
Dominions of Sweden
The Dominions of Sweden or Svenska besittningar were territories that historically came under control of the Swedish Crown, but never became fully integrated with Sweden. This generally meant that they were ruled by Governors-General under the Swedish monarch, but within certain limits retained...
in the Holy Roman Empire, the Swedish monarchs in their roles as princes, or Reichsfürsten, took part in the Imperial Diets
Reichstag (Holy Roman Empire)
The Imperial Diet was the Diet, or general assembly, of the Imperial Estates of the Holy Roman Empire.During the period of the Empire, which lasted formally until 1806, the Diet was not a parliament in today's sense; instead, it was an assembly of the various estates of the realm...
. From 1653 it was the seat of the highest court for that part of Sweden. In 1803 Sweden pledged both town and lordship to Mecklenburg for 1,258,000 Riksdaler, reserving, however, the right of redemption after 100 years. In view of this contingent right of Sweden, Wismar was not represented at the diet of Mecklenburg
Mecklenburg
Mecklenburg is a historical region in northern Germany comprising the western and larger part of the federal-state Mecklenburg-Vorpommern...
until 1897. In 1903 Sweden finally renounced its claims on the town. Wismar still retains a few relics of its old liberties, including the right to fly its own flag. 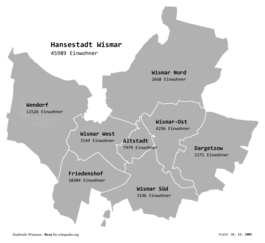 At the turn of the 19th century the most important manufacturing industries of Wismar were iron, machinery, paper, roofing-felt and asphalt. There was also considerable trade, especially by sea, in exports including grain, oil-seeds and butter, and the imports coal, timber and iron. The harbour was deep enough to admit vessels of 5 m draught, and permitting large steamers to unload along its quays. Wismar was the location of the Norddeutsche Dornier-Werke
Dornier Flugzeugwerke
Dornier Flugzeugwerke was a German aircraft manufacturer founded in Friedrichshafen in 1914 by Claudius Dornier. Over the course of its long lifespan, the company produced many notable designs for both the civil and military markets.-History:...
aviation plant and railway - factories. Throughout World War II
World War II
World War II, or the Second World War , was a global conflict lasting from 1939 to 1945, involving most of the world's nations—including all of the great powers—eventually forming two opposing military alliances: the Allies and the Axis...
Wismar was heavily damaged by Allied air raids
Strategic bombing during World War II
Strategic bombing during World War II is a term which refers to all aerial bombardment of a strategic nature between 1939 and 1945 involving any nations engaged in World War II...
and occupied by British and Canadian Forces
Canadian Forces
The Canadian Forces , officially the Canadian Armed Forces , are the unified armed forces of Canada, as constituted by the National Defence Act, which states: "The Canadian Forces are the armed forces of Her Majesty raised by Canada and consist of one Service called the Canadian Armed Forces."...
on May 2, 1945, who retreated again on July 1, 1945 due to the agreements of the Yalta Conference
Yalta Conference
The Yalta Conference, sometimes called the Crimea Conference and codenamed the Argonaut Conference, held February 4–11, 1945, was the wartime meeting of the heads of government of the United States, the United Kingdom, and the Soviet Union, represented by President Franklin D...
making Wismar a part of the Soviet Occupation Zone of Germany.

The centre of the old town is the huge Market Place, the largest in Germany (10,000 square metres), surrounded by elegant buildings with styles ranging from 14th-century North German Gothic to 19th-century Romanesque revival. The square's focal point is the Wasserkunst, an elaborate wrought-iron fountain imported from Holland in 1602. The northern side of the square is occupied by the Town Hall, built in neoclassical style in 1817–1819. Another notable building in the square is an ancient Gothic warehouse called Alter Schwede (The Old Swede), erected around 1380.

The 80 m high tower church of St Mary (Marienkirche) is the only remainder of the original Brick Gothic
Brick Gothic
Brick Gothic is a specific style of Gothic architecture common in Northern Europe, especially in Northern Germany and the regions around the Baltic Sea that do not have natural rock resources. The buildings are essentially built from bricks...
edifice, built in the first half of the 13th century. It suffered heavy damage in World War II
World War II
World War II, or the Second World War , was a global conflict lasting from 1939 to 1945, involving most of the world's nations—including all of the great powers—eventually forming two opposing military alliances: the Allies and the Axis...
, and was deliberately destroyed in 1960 under the East German Communist government.

The church of St Nicholas (Nikolaikirche), built in 1381–1460, with very lofty vaulting, together with the Marienkirche, are regarded as good examples of the influence exercised in these northern provinces by the large church of St Mary in Lübeck
Lübeck
The Hanseatic City of Lübeck is the second-largest city in Schleswig-Holstein, in northern Germany, and one of the major ports of Germany. It was for several centuries the "capital" of the Hanseatic League and, because of its Brick Gothic architectural heritage, is listed by UNESCO as a World...
.

The elegant cruciform church of St George (St Georgen-Kirche) dates from the first half of the 13th century. It was heavily damaged in World War II and repaired during 1990-2010.

The Fürstenhof, at one time a ducal
Duke
A duke or duchess is a member of the nobility, historically of highest rank below the monarch, and historically controlling a duchy...
residence, and later occupied by the municipal
Municipality
A municipality is essentially an urban administrative division having corporate status and usually powers of self-government. It can also be used to mean the governing body of a municipality. A municipality is a general-purpose administrative subdivision, as opposed to a special-purpose district...
authorities, is a richly decorated specimen of the Italian early Renaissance
Renaissance
The Renaissance was a cultural movement that spanned roughly the 14th to the 17th century, beginning in Italy in the Late Middle Ages and later spreading to the rest of Europe. The term is also used more loosely to refer to the historical era, but since the changes of the Renaissance were not...
style. Built in 1552–1565, it was restored in 1877–1879. The "Old School", dating from about 1300, has been restored. The town hall, rebuilt in 1829, contains a collection of pictures. The main gallery for fine arts is the Municipal Gallery "Baumhaus" located in the old harbour area of Wismar.