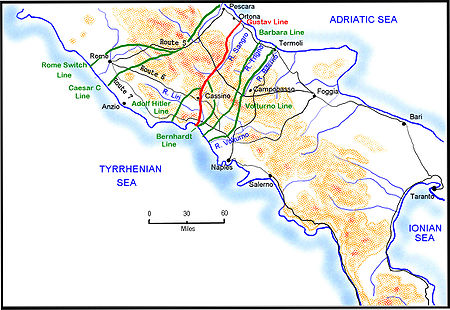 The Winter Line was a series of German
Germany
Germany , officially the Federal Republic of Germany , is a federal parliamentary republic in Europe. The country consists of 16 states while the capital and largest city is Berlin. Germany covers an area of 357,021 km2 and has a largely temperate seasonal climate...
military
Military
A military is an organization authorized by its greater society to use lethal force, usually including use of weapons, in defending its country by combating actual or perceived threats. The military may have additional functions of use to its greater society, such as advancing a political agenda e.g...
fortification
Fortification
Fortifications are military constructions and buildings designed for defence in warfare and military bases. Humans have constructed defensive works for many thousands of years, in a variety of increasingly complex designs...
s in Italy
Italy
Italy , officially the Italian Republic languages]] under the European Charter for Regional or Minority Languages. In each of these, Italy's official name is as follows:;;;;;;;;), is a unitary parliamentary republic in South-Central Europe. To the north it borders France, Switzerland, Austria and...
, constructed during World War II
World War II
World War II, or the Second World War , was a global conflict lasting from 1939 to 1945, involving most of the world's nations—including all of the great powers—eventually forming two opposing military alliances: the Allies and the Axis...
by Organisation Todt
Organisation Todt
The Todt Organisation, was a Third Reich civil and military engineering group in Germany named after its founder, Fritz Todt, an engineer and senior Nazi figure...
. The primary Gustav Line ran across Italy from just north of where the Garigliano River
Garigliano River
The Garigliano is a river in central Italy.It forms at the confluence of the rivers Gari and Liri. Garigliano is actually a deformation of "Gari-Lirano"...
flows into the Tyrrhenian Sea
Tyrrhenian Sea
The Tyrrhenian Sea is part of the Mediterranean Sea off the western coast of Italy.-Geography:The sea is bounded by Corsica and Sardinia , Tuscany, Lazio, Campania, Basilicata and Calabria and Sicily ....
in the west, through the Apennine Mountains
Apennine mountains
The Apennines or Apennine Mountains or Greek oros but just as often used alone as a noun. The ancient Greeks and Romans typically but not always used "mountain" in the singular to mean one or a range; thus, "the Apennine mountain" refers to the entire chain and is translated "the Apennine...
to the mouth of the Sangro River
Sangro River
The Sangro is a river in eastern central Italy, known in ancient times as Sagrus from the Greek Sagros or Isagros, Ισαγρος....
on the Adriatic coast
Adriatic Sea
The Adriatic Sea is a body of water separating the Italian Peninsula from the Balkan peninsula, and the system of the Apennine Mountains from that of the Dinaric Alps and adjacent ranges...
in the east. The centre of the line, where it crossed the main route north to Rome (Highway 6) which followed the Liri
Liri
The Liri is one of the principal rivers of central Italy, flowing into the Tyrrhenian Sea a little below Minturno under the name Garigliano....
Valley, was anchored around the mountains behind the town of Cassino
Cassino
Cassino is a comune in the province of Frosinone, Italy, at the southern end of the region of Lazio.Cassino is located at the foot of Monte Cairo near the confluence of the Rapido and Liri rivers...
including Monte Cassino
Monte Cassino
Monte Cassino is a rocky hill about southeast of Rome, Italy, c. to the west of the town of Cassino and altitude. St. Benedict of Nursia established his first monastery, the source of the Benedictine Order, here around 529. It was the site of Battle of Monte Cassino in 1944...
, on which was situated an old abbey that dominated the entrance to the Liri Valley (a main route to Rome), and Monte Cairo which gave the defenders clear observation of potential attackers advancing towards the mouth of the Liri valley.

On the western side of the Apennines there were two subsidiary lines: the Bernhardt Line
Bernhardt Line
The Bernhardt Line was a German defensive line in Italy during World War II. Having reached the Bernhardt Line at the start of December 1943, it took until mid-January 1944 for U.S. 5th Army to fight their way to the next line of defenses, the Gustav Line. The line was defended by XIV Panzer Corps...
in front of the main Gustav positions and the Hitler Line
Hitler Line
The Hitler Line was a German defensive line in central Italy during the Second World War. The strong points of the line were at Aquino and Piedimonte. In May 1944, the line was re-named the Senger Line, after General von Senger und Etterlin, one of the generals commanding Axis forces in the area...
some 5 miles to the rear. The Winter line was fortified with gun pits, concrete bunkers, turreted machine-gun emplacements, barbed-wire and minefields. It was the strongest of the German defensive lines south of Rome. About 15 German divisions were employed in the defence. It took the Allies from mid-November 1943 to late May 1944 to fight through all the various elements of the Winter Line, including the well-known battles at Monte Cassino
Battle of Monte Cassino
The Battle of Monte Cassino was a costly series of four battles during World War II, fought by the Allies against Germans and Italians with the intention of breaking through the Winter Line and seizing Rome.In the beginning of 1944, the western half of the Winter Line was being anchored by Germans...
and Anzio
Operation Shingle
Operation Shingle , during the Italian Campaign of World War II, was an Allied amphibious landing against Axis forces in the area of Anzio and Nettuno, Italy. The operation was commanded by Major General John P. Lucas and was intended to outflank German forces of the Winter Line and enable an...
.

Some authorities define the Bernhardt Line as crossing Italy from coast to coast following not just the western defensive positions described above but incorporating also the eastern defences of the Gustav Line. Other authorities use the Winter Line name interchangeably with the Gustav Line as defined above.