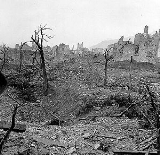 Overview
The Battle of Monte Cassino (also known as the Battle for Rome and the Battle for Cassino) was a costly series of four battles during World War II
World War II
World War II, or the Second World War , was a global conflict lasting from 1939 to 1945, involving most of the world's nations—including all of the great powers—eventually forming two opposing military alliances: the Allies and the Axis...
, fought by the Allies
Allies of World War II
The Allies of World War II were the countries that opposed the Axis powers during the Second World War . Former Axis states contributing to the Allied victory are not considered Allied states...
against Germans and Italians with the intention of breaking through the Winter Line
Winter Line
The Winter Line was a series of German military fortifications in Italy, constructed during World War II by Organisation Todt. The primary Gustav Line ran across Italy from just north of where the Garigliano River flows into the Tyrrhenian Sea in the west, through the Apennine Mountains to the...
and seizing Rome
Rome
Rome is the capital of Italy and the country's largest and most populated city and comune, with over 2.7 million residents in . The city is located in the central-western portion of the Italian Peninsula, on the Tiber River within the Lazio region of Italy.Rome's history spans two and a half...
.

In the beginning of 1944, the western half of the Winter Line was being anchored by Germans holding the Rapido, Liri and Garigliano valleys and certain surrounding peaks and ridges, together known as the Gustav Line.

How many newzealand soldiers came back alive
More
x