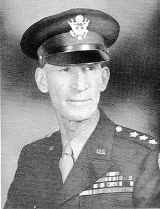 Encyclopedia
General William Hood Simpson (May 18, 1888 – August 15, 1980) was a distinguished U.S. Army officer who commanded the U.S. Ninth Army
U.S. Ninth Army
The Ninth United States Army was one of the main U.S. Army combat commands used during the campaign in Northwest Europe in 1944 and 1945. It was commanded from its inception by Lieutenant General William Simpson...
in northern Europe, during World War II, among other roles.

William Simpson was born May 18, 1888, at Weatherford, Texas
Weatherford, Texas
Weatherford is a city in Parker County, Texas, United States, and a western suburb of Fort Worth. The population was 19,000 at the 2000 census. It is the county seat of Parker County and is part of the Dallas-Fort Worth Metroplex.-Geography:...
. After graduating from the United States Military Academy
United States Military Academy
The United States Military Academy at West Point is a four-year coeducational federal service academy located at West Point, New York. The academy sits on scenic high ground overlooking the Hudson River, north of New York City...
in 1909, he was commissioned into the infantry. Before US involvement in World War I
World War I
World War I , which was predominantly called the World War or the Great War from its occurrence until 1939, and the First World War or World War I thereafter, was a major war centred in Europe that began on 28 July 1914 and lasted until 11 November 1918...
, Simpson served in the US and in the Philippines
Philippines
The Philippines , officially known as the Republic of the Philippines , is a country in Southeast Asia in the western Pacific Ocean. To its north across the Luzon Strait lies Taiwan. West across the South China Sea sits Vietnam...
, including the Mexican Punitive Expedition
Pancho Villa Expedition
The Pancho Villa Expedition—officially known in the United States as the Mexican Expedition and sometimes colloquially referred to as the Punitive Expedition—was a military operation conducted by the United States Army against the paramilitary forces of Mexican insurgent Francisco "Pancho" Villa...
, in 1916.

He was promoted to Captain in May 1917 and served with the 33rd Division throughout World War I, receiving temporary promotions to Major and Lieutenant Colonel and becoming divisional Chief-of-Staff.

In the inter-war years, 1919–1941, Simpson filled staff appointments and attended military schools, both as student and as instructor. From 1932 to 1936, he served as the Professor of Military Science at Pomona College in Claremont, California. In mid-1940, he was appointed to command the 9th Infantry at Fort Sam Houston
Fort Sam Houston
Fort Sam Houston is a U.S. Army post in San Antonio, Texas.Known colloquially as "Fort Sam," it is named for the first President of the Republic of Texas, Sam Houston....
, Texas. Before US entry into World War II, he had commanded divisions and received promotion to temporary Major-General, taking 35th Division from Camp Robinson, Arkansas, to a training site in California.

Further promotions followed and in May, 1944, as a Lieutenant General, Simpson took his staff to Britain to organise the US 9th Army
U.S. Ninth Army
The Ninth United States Army was one of the main U.S. Army combat commands used during the campaign in Northwest Europe in 1944 and 1945. It was commanded from its inception by Lieutenant General William Simpson...
. This formation was activated as part of Omar Bradley
Omar Bradley
Omar Nelson Bradley was a senior U.S. Army field commander in North Africa and Europe during World War II, and a General of the Army in the United States Army...
's 12th Army Group
U.S. 12th Army Group
The Twelfth United States Army Group was the largest and most powerful United States Army formation ever to take to the field. It controlled the majority of American forces on the Western Front in 1944 and 1945...
, on September 5 at Brest
Brest, France
Brest is a city in the Finistère department in Brittany in northwestern France. Located in a sheltered position not far from the western tip of the Breton peninsula, and the western extremity of metropolitan France, Brest is an important harbour and the second French military port after Toulon...
, France. Brest was liberated on September 20.

The 9th Army joined the general advance and, after a month in the Ardennes
Ardennes
The Ardennes is a region of extensive forests, rolling hills and ridges formed within the Givetian Ardennes mountain range, primarily in Belgium and Luxembourg, but stretching into France , and geologically into the Eifel...
the 9th was moved further north. In November, 1944 it broke through the Siegfried Line
Siegfried Line
The original Siegfried line was a line of defensive forts and tank defences built by Germany as a section of the Hindenburg Line 1916–1917 in northern France during World War I...
and advanced, in some of the heaviest fighting of the war, to the Roer
Rur
The Rur , — not to be confused with the Ruhr — is a river which flows through portions of Belgium, Germany and the Netherlands. It is a right tributary to the river Meuse...
River. At this point the advance stalled, due to the threat posed by dams upstream.

The Ninth was the first American Army across the Elbe
Elbe
The Elbe is one of the major rivers of Central Europe. It rises in the Krkonoše Mountains of the northwestern Czech Republic before traversing much of Bohemia , then Germany and flowing into the North Sea at Cuxhaven, 110 km northwest of Hamburg...
, on April 12.

Simpson returned to the US in June, 1945. He undertook a mission to China in July and subsequently commanded the U.S. Second Army
U.S. Second Army
Second United States Army was formed 15 October 1918 during World War I. It functioned as a training and administrative headquarters until being inactivated 15 April 1919....
at Memphis, Tennessee. He retired in November 1946 and, on July 19, 1954 he was promoted to General on the retired list by special Act of Congress (Public Law 83-508).