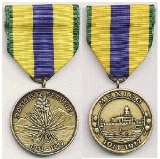 To be awarded the Mexican Service Medal, a service member was required to perform military duty during the time period of eligibility and in one of the following military engagements.

The Mexican Service Medal was also awarded to any service member who was wounded or killed while participating in action any against hostile Mexican forces between April 12, 1911 and February 7, 1917.

Although a single decoration, both the Army and Navy issued two different versions of the Mexican Service Medal. The Army Mexican Service Medal displayed an engraving of a yucca plant
Yucca
Yucca is a genus of perennial shrubs and trees in the family Asparagaceae, subfamily Agavoideae. Its 40-50 species are notable for their rosettes of evergreen, tough, sword-shaped leaves and large terminal panicles of white or whitish flowers. They are native to the hot and dry parts of North...
, while the Navy version depicted a water front fortress. Both medals displayed the annotation "1911 - 1917" on the bottom of the medal.

The Mexican Service Medal was a one time decoration and there were no service stars authorized for those who had participated in multiple engagements. For those Army members who had been cited for gallantry in combat, the Citation Star
Citation Star
The Citation Star was an award of the United States Army which was first established by the United States Congress on July 9, 1918. The Citation Star was a silver star device pinned to the World War I Victory Medal to denote those who had been cited for extreme heroism or valor...
was authorized as a device to the Mexican Service Medal. There were no devices authorized for the Navy's version of the decoration.