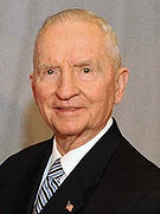 With an estimated net worth of about US$
United States dollar
The United States dollar , also referred to as the American dollar, is the official currency of the United States of America. It is divided into 100 smaller units called cents or pennies....
3.4 billion in 2011, he is ranked by Forbes
Forbes
Forbes is an American publishing and media company. Its flagship publication, the Forbes magazine, is published biweekly. Its primary competitors in the national business magazine category are Fortune, which is also published biweekly, and Business Week...
as the 99th-richest person in the United States
Forbes 400
The Forbes 400 or 400 Richest Americans is a list published by Forbes Magazine magazine of the wealthiest 400 Americans, ranked by net worth. The list is published annually in September, and 2010 marks the 29th issue. The 400 was started by Malcom Forbes in 1982 and treats those in the list like...
.
Perot was born in Texarkana, Texas
Texarkana, Texas
Texarkana is a city in Bowie County, Texas, United States. It effectively functions as one half of a city which crosses a state line — the other half, the city of Texarkana, Arkansas, lies on the other side of State Line Avenue...
, to Luly Maye Perot (née Ray) and Gabriel Ross Perot.

Inventories can be managed, but people must be led.

If someone as blessed as I am is not willing to clean out the barn, who will?

If you see a snake, just kill it - don't appoint a committee on snakes.

Something in human nature causes us to start slacking off at our moment of greatest accomplishment. As you become successful, you will need a great deal of self-discipline not to lose your sense of balance, humility, and commitment.

Eagles don't flock, you have to find them one at a time.

Most people give up just when they're about to achieve success. They quit on the one yard line. They give up at the last minute of the game one foot from a winning touchdown.

You’re going to hear a giant sucking sound of jobs being pulled out of this country. [during a presidential debate (1992)]