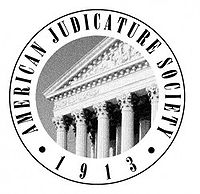 The American Judicature Society (AJS) (founded 1913) is an independent, nonpartisan, national organization of judges, lawyers, and interested members of the public whose mission is to improve the American justice system - to "secure and promote an independent and qualified judiciary and fair system of justice."   Its membership roster includes renowned members of the legal profession, including U.S. attorneys general and Supreme Court justices.

Its primary focus areas are:

The AJS main offices are located at The Opperman Center at Drake University
Drake University
Drake University is a private, co-educational university located in Des Moines, Iowa, USA. The institution offers a number of undergraduate and graduate programs, as well as professional programs in law and pharmacy. Today, Drake is one of the twenty-five oldest law schools in the country....
, Des Moines, Iowa
Des Moines, Iowa
Des Moines is the capital and the most populous city in the US state of Iowa. It is also the county seat of Polk County. A small portion of the city extends into Warren County. It was incorporated on September 22, 1851, as Fort Des Moines which was shortened to "Des Moines" in 1857...
.

On September 10, 2005 the AJS announced the establishment of the Institute of Forensic Science and Public Policy to research and provide education on issues leading to wrongful convictions in the U.S. The institute will be led by former U.S. Attorney General Janet Reno
Janet Reno
Janet Wood Reno is a former Attorney General of the United States . She was nominated by President Bill Clinton on February 11, 1993, and confirmed on March 11...
and David Dorn, MD, former dean of the Stanford Medical School. The institute will be located in Greensboro, NC. http://releases.usnewswire.com/GetRelease.asp?id=56513