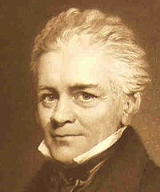 Encyclopedia
Sir William Cubitt was an eminent English
England
England is a country that is part of the United Kingdom. It shares land borders with Scotland to the north and Wales to the west; the Irish Sea is to the north west, the Celtic Sea to the south west, with the North Sea to the east and the English Channel to the south separating it from continental...
civil engineer
Civil engineer
A civil engineer is a person who practices civil engineering; the application of planning, designing, constructing, maintaining, and operating infrastructures while protecting the public and environmental health, as well as improving existing infrastructures that have been neglected.Originally, a...
and millwright
Millwright
A millwright is a craftsman or tradesman engaged with the construction and maintenance of machinery.Early millwrights were specialist carpenters who erected machines used in agriculture, food processing and processing lumber and paper...
. Born in Norfolk
Norfolk
Norfolk is a low-lying county in the East of England. It has borders with Lincolnshire to the west, Cambridgeshire to the west and southwest and Suffolk to the south. Its northern and eastern boundaries are the North Sea coast and to the north-west the county is bordered by The Wash. The county...
, England, he was employed in many of the great engineering undertakings of his time. He invented a type of windmill
Windmill
A windmill is a machine which converts the energy of wind into rotational energy by means of vanes called sails or blades. Originally windmills were developed for milling grain for food production. In the course of history the windmill was adapted to many other industrial uses. An important...
sail and the prison treadwheel
Treadwheel
A treadwheel is a form of animal engine typically powered by humans. It may resemble a water wheel in appearance, and can be worked either by a human treading paddles set into its circumference , or by a human or animal standing inside it .Uses of treadwheels included raising water, to power...
, and was employed as chief engineer, at Ransomes
Ransomes
Ransomes is the common name for the Ransomes, Sims & Jefferies engineering firm. It may also refer to several other organisations or locations name after the firm:*Ransomes and Reavell Sports Club Ground*Ransomes Industrial Estate*Ransomes Sports F.C....
of Ipswich
Ipswich
Ipswich is a large town and a non-metropolitan district. It is the county town of Suffolk, England. Ipswich is located on the estuary of the River Orwell...
, before moving to London. He worked on canals, docks, and railways, including the South Eastern Railway
South Eastern Railway (UK)
The South Eastern Railway was a railway company in south-eastern England from 1836 until 1922. The company was formed to construct a route from London to Dover. Branch lines were later opened to Tunbridge Wells, Hastings, Canterbury and other places in Kent...
and the Great Northern Railway
Great Northern Railway (Great Britain)
The Great Northern Railway was a British railway company established by the Great Northern Railway Act of 1846. On 1 January 1923 the company lost its identity as a constituent of the newly formed London and North Eastern Railway....
. He was the chief engineer of Crystal Palace
The Crystal Palace
The Crystal Palace was a cast-iron and glass building originally erected in Hyde Park, London, England, to house the Great Exhibition of 1851. More than 14,000 exhibitors from around the world gathered in the Palace's of exhibition space to display examples of the latest technology developed in...
erected at Hyde Park
Hyde Park, London
Hyde Park is one of the largest parks in central London, United Kingdom, and one of the Royal Parks of London, famous for its Speakers' Corner.The park is divided in two by the Serpentine...
in 1851.

One of Cubitt's nephews and his protégé on the South Eastern
Great Eastern Railway
The Great Eastern Railway was a pre-grouping British railway company, whose main line linked London Liverpool Street to Norwich and which had other lines through East Anglia...
and Great Northern
Great Northern Railway (Great Britain)
The Great Northern Railway was a British railway company established by the Great Northern Railway Act of 1846. On 1 January 1923 the company lost its identity as a constituent of the newly formed London and North Eastern Railway....
railways, James Moore
James Moore (engineer)
James Moore was an engineer responsible for the first steam railway to operate in Australia.James Moore C.E. was a nephew of Sir William Cubitt, under whom he was engaged on the South Eastern and Great Northern railways in Britain, and presumably learnt his trade there...
C. E., was appointed Chief Engineer for the Hobson's Bay Railway company
Melbourne and Hobson's Bay Railway Company
The Melbourne and Hobson's Bay Railway Company was a railway company in Victoria, Australia. The company was founded on 20 January 1853 to build Australia's first railway broad gauge line from Melbourne to the port of Sandridge...
and designed the first commercial steam railway in Melbourne, Australia. Moore replaced another of Cubitt's assistants, William Snell Chauncy
William Snell Chauncy
William Snell Chauncy was an English civil engineer responsible for a number of important engineering works including the first steam railway opened in Australia.-Early life and work:...
..

Extant structures by Cubitt include: