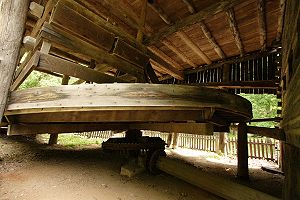 A treadwheel is a form of animal engine
Animal engine
An animal engine is a machine powered by an animal. Horses, donkeys, oxen, dogs, and humans have all been used in this way.-See also:*Horse mill*Horse power*Persian well*TreadwheelFor Details log on to www.greenenergysolutions.co.in- Books :...
typically powered by humans. It may resemble a water wheel
Water wheel
A water wheel is a machine for converting the energy of free-flowing or falling water into useful forms of power. A water wheel consists of a large wooden or metal wheel, with a number of blades or buckets arranged on the outside rim forming the driving surface...
in appearance, and can be worked either by a human treading paddles set into its circumference (treadmill), or by a human or animal standing inside it (treadwheel).

They were used in prisons as penal labor in the early Victorian period in Britain
United Kingdom
The United Kingdom of Great Britain and Northern IrelandIn the United Kingdom and Dependencies, other languages have been officially recognised as legitimate autochthonous languages under the European Charter for Regional or Minority Languages...
as a form of punishment. Illustration of prisoners on 1821 treadmill used to mill corn in Surrey House of Correction (now Brixton Prison). According to The Times
The Times
The Times is a British daily national newspaper, first published in London in 1785 under the title The Daily Universal Register . The Times and its sister paper The Sunday Times are published by Times Newspapers Limited, a subsidiary since 1981 of News International...
in 1827, and reprinted in William Hone
William Hone
William Hone was an English writer, satirist and bookseller. His victorious court battle against government censorship in 1817 marked a turning point in the fight for British press freedom.-Biography:...
's Table-Book in 1838, the amount prisoners walked per day on average varied, from 6,600 feet at Lewes
Lewes
Lewes is the county town of East Sussex, England and historically of all of Sussex. It is a civil parish and is the centre of the Lewes local government district. The settlement has a history as a bridging point and as a market town, and today as a communications hub and tourist-oriented town...
to 17,000 feet in ten hours during the summertime at Warwick
Warwick
Warwick is the county town of Warwickshire, England. The town lies upon the River Avon, south of Coventry and just west of Leamington Spa and Whitnash with which it is conjoined. As of the 2001 United Kingdom census, it had a population of 23,350...
gaol.

A treadwheel was also used in a submarine
Submarine
A submarine is a watercraft capable of independent operation below the surface of the water. It differs from a submersible, which has more limited underwater capability...
in 1851 to pump air to change buoyancy and thus make the vessel dive or rise.