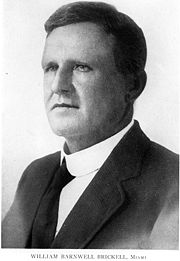 Brickell and his wife Mary moved to southern Florida
Florida
Florida is a state in the southeastern United States, located on the nation's Atlantic and Gulf coasts. It is bordered to the west by the Gulf of Mexico, to the north by Alabama and Georgia and to the east by the Atlantic Ocean. With a population of 18,801,310 as measured by the 2010 census, it...
from Cleveland, Ohio
Cleveland, Ohio
Cleveland is a city in the U.S. state of Ohio and is the county seat of Cuyahoga County, the most populous county in the state. The city is located in northeastern Ohio on the southern shore of Lake Erie, approximately west of the Pennsylvania border...
in 1871. He and his family opened a trading post and post office on the south bank of the Miami River, near the site of Fort Dallas
Fort Dallas
Fort Dallas is a urban park in the Lummus Park Historic District of Miami, Florida, just west of Downtown. It once acted as a military base during the Seminole Wars, located on the banks of the Miami River in what is now Downtown, Miami, Florida, United States....
.

The Brickell family owned large tracts of land stretching from Coconut Grove
Coconut Grove, Florida
Coconut Grove is the oldest continuously inhabited neighborhood of Miami, Florida in Miami-Dade County, United States. The neighborhood is roughly bound by North Prospect Drive to the south, LeJeune Road to the west, South Dixie Highway and Rickenbacker Causeway to the north, and Biscayne Bay to...
to the Miami River
Miami River (Florida)
The Miami River is a river in the United States state of Florida that drains out of the Everglades and runs through the Downtown and the city of Miami. The long river flows from the terminus of the Miami Canal at Miami International Airport to Biscayne Bay...
. Their neighbor, Julia Tuttle
Julia Tuttle
Julia DeForest Tuttle, was an entrepreneur, citrus farmer and businesswoman who was largely responsible for, and the original owner of, the land upon which Miami, Florida, was built...
, also originally from Cleveland, is credited with attracting the attention of Florida's east coast railroad and resort hotel
Hotel
A hotel is an establishment that provides paid lodging on a short-term basis. The provision of basic accommodation, in times past, consisting only of a room with a bed, a cupboard, a small table and a washstand has largely been replaced by rooms with modern facilities, including en-suite bathrooms...
magnate Henry M. Flagler to extend his interests to the area. Both Brickell and Tuttle contributed land to the Flagler's Florida East Coast Railway
Florida East Coast Railway
The Florida East Coast Railway is a Class II railroad operating in the U.S. state of Florida; in the past, it has been a Class I railroad.Built primarily in the last quarter of the 19th century and the first decade of the 20th century, the FEC was a project of Standard Oil principal Henry Morrison...
, which brought growth and development and put Miami on the map. After William Brickell's death, his widow, Mary Brickell, became one of the young city's prominent real estate developers and managers. 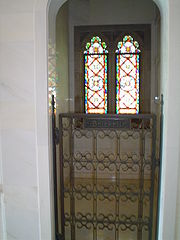