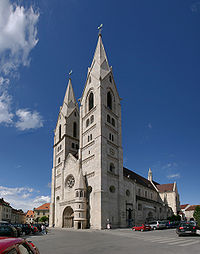 The city has two airfields (a military one which was the first airfield in Austria and a civil one owned by Diamond Aircraft) and is the starting point of Austria's only shipping canal, the Wiener Neustaedter Kanal, which was meant to reach out to Trieste
Trieste
Trieste is a city and seaport in northeastern Italy. It is situated towards the end of a narrow strip of land lying between the Adriatic Sea and Italy's border with Slovenia, which lies almost immediately south and east of the city...
but was never finished.

Monheim am Rhein
Monheim am Rhein
Monheim am Rhein is a town on the right bank of the river Rhine in North Rhine-Westphalia, Germany. Monheim belongs to the district of Mettmann - with the southern suburbs of Düsseldorf to the north, and the Bergisches Land to the south...
, Germany
Germany
Germany , officially the Federal Republic of Germany , is a federal parliamentary republic in Europe. The country consists of 16 states while the capital and largest city is Berlin. Germany covers an area of 357,021 km2 and has a largely temperate seasonal climate...
Desenzano del Garda
Desenzano del Garda
Desenzano del Garda is a town and comune in the province of Brescia, in Lombardy, Italy, which borders Lake Garda. It is bordered by other communes of Castiglione delle Stiviere, Lonato, Padenghe sul Garda and Sirmione.-History:...
, Italy
Italy
Italy , officially the Italian Republic languages]] under the European Charter for Regional or Minority Languages. In each of these, Italy's official name is as follows:;;;;;;;;), is a unitary parliamentary republic in South-Central Europe. To the north it borders France, Switzerland, Austria and...
Sopron
Sopron
In 1910 Sopron had 33,932 inhabitants . Religions: 64.1% Roman Catholic, 27.8% Lutheran, 6.6% Jewish, 1.2% Calvinist, 0.3% other. In 2001 the city had 56,125 inhabitants...
, Hungary
Hungary
Hungary , officially the Republic of Hungary , is a landlocked country in Central Europe. It is situated in the Carpathian Basin and is bordered by Slovakia to the north, Ukraine and Romania to the east, Serbia and Croatia to the south, Slovenia to the southwest and Austria to the west. The...
, since 1988 Harbin
Harbin
Harbin ; Manchu language: , Harbin; Russian: Харби́н Kharbin ), is the capital and largest city of Heilongjiang Province in Northeast China, lying on the southern bank of the Songhua River...
, People's Republic of China (PRC)
People's Republic of China
China , officially the People's Republic of China , is the most populous country in the world, with over 1.3 billion citizens. Located in East Asia, the country covers approximately 9.6 million square kilometres...

Development of the city

The most recent extension of the city is the CIVITAS NOVA, Latin for new city, an ambitious project for an industrial, research and commercial center. In 2008, on the area of the Civitas Nova, a cancer research center for ion therapy
Ion therapy
Negative air ionization therapy is the use of air ionisers as an experimental non-pharmaceutical treatment for seasonal affective disorder and mild depression....
will be opened under the name of Med Austron (link in German).

In 1996 Wiener Neustadt became internationally famous as a so-called "sidewalk" designed by Japanese artist Tadashi Kawamata was built around the main square.

Wiener Neustadt is the setting for the book Reluctant Return: A Survivor's Journey to an Austrian town.http://books.google.com/books?id=DDEtbvYi0S4C