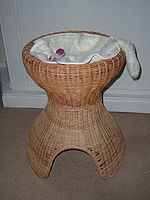 Wicker is hard woven
Weaving
Weaving is a method of fabric production in which two distinct sets of yarns or threads are interlaced at right angles to form a fabric or cloth. The other methods are knitting, lace making and felting. The longitudinal threads are called the warp and the lateral threads are the weft or filling...
fiber
Fiber
Fiber is a class of materials that are continuous filaments or are in discrete elongated pieces, similar to lengths of thread.They are very important in the biology of both plants and animals, for holding tissues together....
formed into a rigid material, usually used for baskets or furniture
Furniture
Furniture is the mass noun for the movable objects intended to support various human activities such as seating and sleeping in beds, to hold objects at a convenient height for work using horizontal surfaces above the ground, or to store things...
. Wicker is often made of material of plant
Plant
Plants are living organisms belonging to the kingdom Plantae. Precise definitions of the kingdom vary, but as the term is used here, plants include familiar organisms such as trees, flowers, herbs, bushes, grasses, vines, ferns, mosses, and green algae. The group is also called green plants or...
origin, but plastic
Plastic
A plastic material is any of a wide range of synthetic or semi-synthetic organic solids used in the manufacture of industrial products. Plastics are typically polymers of high molecular mass, and may contain other substances to improve performance and/or reduce production costs...
fibers are also used.

Materials used can be any part of a plant, such as the cores of cane
Cane
Cane are either of two genera of tall, perennial grasses with flexible, woody stalks from the family Poaceae that grow throughout the world in wet soils. They are related to and may include species of bamboo. The genus Arundo is native from the Mediterranean region to the Far East. Arundinaria...
or rattan
Rattan
Rattan is the name for the roughly 600 species of palms in the tribe Calameae, native to tropical regions of Africa, Asia and Australasia.- Structure :...
stalks, or whole thicknesses of plants, as with willow
Willow
Willows, sallows, and osiers form the genus Salix, around 400 species of deciduous trees and shrubs, found primarily on moist soils in cold and temperate regions of the Northern Hemisphere...
switches. Other popular materials include reed
Phragmites
Phragmites, the Common reed, is a large perennial grass found in wetlands throughout temperate and tropical regions of the world. Phragmites australis is sometimes regarded as the sole species of the genus Phragmites, though some botanists divide Phragmites australis into three or four species...
and bamboo
Bamboo
Bamboo is a group of perennial evergreens in the true grass family Poaceae, subfamily Bambusoideae, tribe Bambuseae. Giant bamboos are the largest members of the grass family....
.

Often a frame is made of stiffer materials, after which more pliant material is used to fill in the frame. Wicker is light yet sturdy, making it suitable for furniture that will be moved often. It is often used for porch and patio
Patio
A patio is an outdoor space generally used for dining or recreation that adjoins a residence and is typically paved. It may refer to a roofless inner courtyard of the sort found in Spanish-style dwellings or a paved area between a residence and a garden....
furniture.

Wicker furniture has been documented as far back as ancient Egypt, that was considered to be one of the ideal elements of modern outdoor furniture. It was the first natural materials to be used for furniture, starting out as baskets and chairs. The history of wicker furniture was exposed when archaeologists discovered dozens of wicker furniture made from reed and swamp grasses (Saunders 1990), while working to uncover the civilizations of the pharaohs.

The popularity of wicker furniture was passed from Egypt to Rome and throughout Europe as traders of international sea carried the materials to Great Britain, Portugal, and Spain and wicker baskets have been found in Pompeii
Pompeii
The city of Pompeii is a partially buried Roman town-city near modern Naples in the Italian region of Campania, in the territory of the comune of Pompei. Along with Herculaneum, Pompeii was destroyed and completely buried during a long catastrophic eruption of the volcano Mount Vesuvius spanning...
. The popularity of wicker in America, however, was another story as it’s widespread did not happen until the mid-nineteenth century. It was Cyrus Wakefield who had discovered large quantities of rattan, the most common material for wicker furniture, began construction of his own line of wicker furniture from rattan. That soon caught the attention of the population and made his company one of the leading industries in wicker furniture. It has been proposed that the extensive use of wicker objects in the Iron Age
Iron Age
The Iron Age is the archaeological period generally occurring after the Bronze Age, marked by the prevalent use of iron. The early period of the age is characterized by the widespread use of iron or steel. The adoption of such material coincided with other changes in society, including differing...
had an influence on the development of the patterns used in Celtic art
Celtic art
Celtic art is the art associated with the peoples known as Celts; those who spoke the Celtic languages in Europe from pre-history through to the modern period, as well as the art of ancient peoples whose language is uncertain, but have cultural and stylistic similarities with speakers of Celtic...
. In recent times, its aesthetic was influenced heavily by the Arts and Crafts movement
Arts and Crafts movement
Arts and Crafts was an international design philosophy that originated in England and flourished between 1860 and 1910 , continuing its influence until the 1930s...
at the turn of the 20th century.

There are two types of wicker furniture available—natural and synthetic. Natural wicker is well-known for its strength and durability, and for the high level of beauty and comfort that an expert craftsman can produce. Natural wicker requires maintenance to keep it in good shape. Synthetic types include paper-wrapped high tensile wire (using the Lloyd Loom
Lloyd Loom
The Lloyd Loom process was invented in 1917 by the American Marshall B. Lloyd, who twisted kraft paper round a metal wire, placed the paper threads on a loom and wove them into what was to become the traditional Lloyd Loom fabric. Lloyd Loom chairs quickly became very popular in the United States...
process patented in the early 1900s), and plastic or resin and are often preferred for outdoor use.