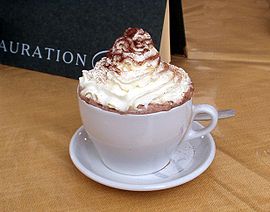 Whipped cream is cream
Cream
Cream is a dairy product that is composed of the higher-butterfat layer skimmed from the top of milk before homogenization. In un-homogenized milk, over time, the lighter fat rises to the top. In the industrial production of cream this process is accelerated by using centrifuges called "separators"...
that has been beaten by a mixer
Mixer (cooking)
A mixer is a kitchen appliance intended for mixing, folding, beating, and whipping food ingredients. Mixers come in two major variations, hand mixers and stand mixers....
, whisk
Whisk
A whisk is a cooking utensil used in food preparation to blend ingredients smooth, or to incorporate air into a mixture, in a process known as whisking or whipping. Most whisks consist of a long, narrow handle with a series of wire loops joined at the end. The wires are usually metal, but some are...
, or fork
Fork
As a piece of cutlery or kitchenware, a fork is a tool consisting of a handle with several narrow tines on one end. The fork, as an eating utensil, has been a feature primarily of the West, whereas in East Asia chopsticks have been more prevalent...
until it is light and fluffy. Whipped cream is often sweetened and sometimes flavored with vanilla
Vanilla
Vanilla is a flavoring derived from orchids of the genus Vanilla, primarily from the Mexican species, Flat-leaved Vanilla . The word vanilla derives from the Spanish word "", little pod...
, in which case it may be called Chantilly cream or crème Chantilly (kʁɛm ʃɑ̃tiji).

Cream containing 30% or more butterfat
Butterfat
Butterfat or milkfat is the fatty portion of milk. Milk and cream are often sold according to the amount of butterfat they contain.- Composition :The fatty acids of butterfat are typically composed as follows :...
can be mixed with air, and the resulting colloid
Colloid
A colloid is a substance microscopically dispersed evenly throughout another substance.A colloidal system consists of two separate phases: a dispersed phase and a continuous phase . A colloidal system may be solid, liquid, or gaseous.Many familiar substances are colloids, as shown in the chart below...
is roughly double the volume of the original cream as air bubbles are captured into a network of fat droplets. If, however, the whipping is continued, the fat droplets will stick together destroying the colloid and forming butter
Butter
Butter is a dairy product made by churning fresh or fermented cream or milk. It is generally used as a spread and a condiment, as well as in cooking applications, such as baking, sauce making, and pan frying...
; the remaining liquid is buttermilk
Buttermilk
Buttermilk refers to a number of dairy drinks. Originally, buttermilk was the liquid left behind after churning butter out of cream. It also refers to a range of fermented milk drinks, common in warm climates where unrefrigerated fresh milk otherwise sours quickly...
.

Confectioner's (icing) sugar is sometimes added to the colloid in order to stiffen the mixture and to reduce the risk of overwhipping.

Milk resists the whipping and does not hold the air bubbles well. Light whipping cream contains 30% to 36% butterfat and holds air bubbles when whipped. Heavy cream
Heavy Cream
Heavy Cream is a compilation album of music recorded by Cream during 1966-68.Although available in other territories as well, the album was largely released to address the North American market, in order for Polydor Records to leverage Cream's back catalog; prior to 1972, Polydor had licensed...
contains 36% or more fat.

Cream is usually whipped with a whisk
Whisk
A whisk is a cooking utensil used in food preparation to blend ingredients smooth, or to incorporate air into a mixture, in a process known as whisking or whipping. Most whisks consist of a long, narrow handle with a series of wire loops joined at the end. The wires are usually metal, but some are...
, an electric or hand mixer
Mixer (cooking)
A mixer is a kitchen appliance intended for mixing, folding, beating, and whipping food ingredients. Mixers come in two major variations, hand mixers and stand mixers....
, or (with some effort) a fork
Fork
As a piece of cutlery or kitchenware, a fork is a tool consisting of a handle with several narrow tines on one end. The fork, as an eating utensil, has been a feature primarily of the West, whereas in East Asia chopsticks have been more prevalent...
.

Whipped cream may be sold ready-to-use in pressurized containers; when the cream leaves the nozzle, it produces four times the volume of cream, twice the volume produced by whipping air into it. Using this technique, it may also be prepared in reusable dispensers, similar to a seltzer
Carbonated water
Carbonated water is water into which carbon dioxide gas under pressure has been dissolved, a process that causes the water to become effervescent....
siphon bottle, using inexpensive disposable cartridges
Whipped-cream charger
A whipped cream charger is a steel cylinder or cartridge filled with nitrous oxide that is used as a whipping agent in a whipped cream dispenser. The nitrous oxide in whipped cream chargers is also used by recreational drug users as an inhalant for its psychoactive effects...
. The whipped cream thus produced is unstable, however, and will return to a more or less liquid state within half an hour to one hour. Thus, the method is not suitable for decorating food that will not be immediately served.

Whipped cream is a popular topping for desserts such as pie, ice cream
Ice cream
Ice cream is a frozen dessert usually made from dairy products, such as milk and cream, and often combined with fruits or other ingredients and flavours. Most varieties contain sugar, although some are made with other sweeteners...
, cupcakes, cake, milkshakes and pudding
Pudding
Pudding most often refers to a dessert, but it can also be a savory dish.In the United States, pudding characteristically denotes a sweet milk-based dessert similar in consistency to egg-based custards, though it may also refer to other types such as bread and rice pudding.In the United Kingdom and...
s.

Crème Chantilly is whipped cream sweetened with sugar and often flavored with vanilla; or even simply whipped cream with no additions.
A legend claims that it was invented by François Vatel
François Vatel
François Vatel was the maître d'hôtel of Nicolas Fouquet and prince Louis II de Bourbon-Condé.He is widely, but incorrectly, credited with creating crème Chantilly , a sweet, vanilla-flavoured whipped cream, for an extravagant banquet for 2,000 people hosted in honour of Louis XIV by Louis, the...
, maître d'hôtel
Maître d'hôtel
The maître d’hôtel in the original French language is literally the "master of the hotel". In a suitably staffed restaurant or hotel, it is the person in charge of assigning customers to tables and dividing the dining area into areas of responsibility for the various servers on duty. The plural...
at the Château de Chantilly
Château de Chantilly
The Château de Chantilly is a historic château located in the town of Chantilly, France. It comprises two attached buildings; the Grand Château, destroyed during the French Revolution and rebuilt in the 1870s, and the Petit Château which was built around 1560 for Anne de Montmorency...
in the 17th century; however, the name "Chantilly" is not recorded until 1784, when it was served to the Baronne d'Oberkirch at the Hameau de la reine in the Parc de Versailles
Palace of Versailles
The Palace of Versailles , or simply Versailles, is a royal château in Versailles in the Île-de-France region of France. In French it is the Château de Versailles....
; the name Chantilly was probably used because the château had become a symbol of refined food.
The source of this article is wikipedia, the free encyclopedia.  The text of this article is licensed under the GFDL.