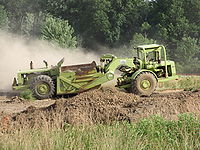 The rear part has a vertically moveable hopper
Hopper
Hopper may refer to:-Mechanical parts:* A general term for a chute with additional width and depth for temporary storage* Hopper , a large container used for dust collection* Part of a combine harvester...
(also known as the bowl) with a sharp horizontal front edge. The hopper can be hydraulically
Hydraulics
Hydraulics is a topic in applied science and engineering dealing with the mechanical properties of liquids. Fluid mechanics provides the theoretical foundation for hydraulics, which focuses on the engineering uses of fluid properties. In fluid power, hydraulics is used for the generation, control,...
lowered and raised. When the hopper is lowered, the front edge cuts into the soil
Soil
Soil is a natural body consisting of layers of mineral constituents of variable thicknesses, which differ from the parent materials in their morphological, physical, chemical, and mineralogical characteristics...
or clay
Clay
Clay is a general term including many combinations of one or more clay minerals with traces of metal oxides and organic matter. Geologic clay deposits are mostly composed of phyllosilicate minerals containing variable amounts of water trapped in the mineral structure.- Formation :Clay minerals...
like a plane
Plane (tool)
A hand plane is a tool for shaping wood. When powered by electricity, the tool may be called a planer. Planes are used to flatten, reduce the thickness of, and impart a smooth surface to a rough piece of lumber or timber. Planing is used to produce horizontal, vertical, or inclined flat surfaces on...
and fills the hopper. When the hopper is full (8 to 34 m³ or 10.5 to 44.5 cuyd heaped, depending on type) it is raised, and closed with a vertical blade (known as the apron). The scraper can transport its load to the fill area where the blade is raised, the back panel of the hopper, or the ejector, is hydraulically pushed forward and the load tumbles out. Then the empty scraper returns to the cut
Cut (earthmoving)
In civil engineering, a cut or cutting is where soil or rock material from a hill or mountain is cut out to make way for a canal, road or railway line....
site and repeats the cycle.

On the 'elevating scraper' the bowl is filled by a type of conveyor arrangement
Conveyor belt
A conveyor belt consists of two or more pulleys, with a continuous loop of material - the conveyor belt - that rotates about them. One or both of the pulleys are powered, moving the belt and the material on the belt forward. The powered pulley is called the drive pulley while the unpowered pulley...
fitted with horizontal flights to move the material engaged by the cutting edge into the bowl as the machine moves forward. Elevating scrapers do not require assistance from push-tractors. The pioneer developer of the elevating scraper was Hancock Manufacturing Company of Lubbock, Texas USA. This concept was further developed by LeTourneau Westinghouse Company.

Scrapers can be very efficient on short hauls where the cut and fill
Cut and fill
In earthmoving, cut and fill is the process of constructing a railway, road or canal whereby the amount of material from cuts roughly matches the amount of fill needed to make nearby embankments, so minimizing the amount of construction labor...
areas are close together and have sufficient length to fill the hopper. The heavier scraper types have two engines ('tandem powered'), one driving the front wheels, one driving the rear wheels, with engines up to 400 kW. Two scrapers can work together in a push-pull fashion but this requires a long cut area. 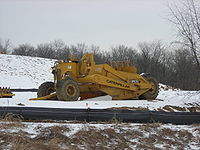 Self propelled scrapers were invented by R. G. LeTourneau
R. G. LeTourneau
Robert Gilmour LeTourneau ﻿, born in Richford, Vermont, was a prolific inventor of earthmoving machinery. His machines represented nearly 70 percent of the earthmoving equipment and Engineering vehicles used during World War II, and he was responsible for nearly 300 patents...
in the 1930s. His company called them Tournahoppers.
The source of this article is wikipedia, the free encyclopedia.  The text of this article is licensed under the GFDL.