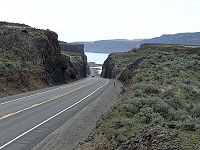 In cut and fill
Cut and fill
In earthmoving, cut and fill is the process of constructing a railway, road or canal whereby the amount of material from cuts roughly matches the amount of fill needed to make nearby embankments, so minimizing the amount of construction labor...
construction it keeps the route straight and/or flat, where the comparative cost or practicality of alternate solutions (such as diversion) is too prohibitive. Contrary to the general meaning of cutting
Cutting
Cutting is the separation of a physical object, or a portion of a physical object, into two portions, through the application of an acutely directed force. An implement commonly used for cutting is the knife or in medical cases the scalpel...
, a cutting in construction is mechanically excavated
Earthworks (engineering)
Earthworks are engineering works created through the moving or processing of quantities of soil or unformed rock.- Civil engineering use :Typical earthworks include roads, railway beds, causeways, dams, levees, canals, and berms...
or blasted out with carefully placed explosives. The cut may only be on one side of a slope
Slope
In mathematics, the slope or gradient of a line describes its steepness, incline, or grade. A higher slope value indicates a steeper incline....
, or directly through the middle or top of a hill. Generally, a cut is open at the top (otherwise it is a tunnel
Tunnel
A tunnel is an underground passageway, completely enclosed except for openings for egress, commonly at each end.A tunnel may be for foot or vehicular road traffic, for rail traffic, or for a canal. Some tunnels are aqueducts to supply water for consumption or for hydroelectric stations or are sewers...
). A cut is (in a sense) the opposite of an embankment
Embankment (transportation)
To keep a road or railway line straight or flat, and where the comparative cost or practicality of alternate solutions is prohibitive, the land over which the road or rail line will travel is built up to form an embankment. An embankment is therefore in some sense the opposite of a cutting, and...
.

When used in reference to transportation routes, it reduces the grade of the route.

Cuts can be created by multiple passes of a grader
Grader
A grader, also commonly referred to as a road grader, a blade, a maintainer, or a motor grader, is a construction machine with a long blade used to create a flat surface. Typical models have three axles, with the engine and cab situated above the rear axles at one end of the vehicle and a third...
, scraper
Wheel tractor-scraper
In civil engineering, a wheel tractor-scraper is a piece of heavy equipment used for earthmoving.The rear part has a vertically moveable hopper with a sharp horizontal front edge. The hopper can be hydraulically lowered and raised. When the hopper is lowered, the front edge cuts into the soil or...
or excavator
Excavator
Excavators are heavy construction equipment consisting of a boom, stick, bucket and cab on a rotating platform . The house sits atop an undercarriage with tracks or wheels. A cable-operated excavator uses winches and steel ropes to accomplish the movements. They are a natural progression from the...
, or by blasting. One unusual means of creating a cut is to remove the roof of a tunnel through daylighting
Daylighting (tunnels)
Daylighting a tunnel is to remove its "roof" or overlying rock and soil, thus exposing the railway or roadway to daylight. This could also be seen as converting the tunnel to a railway or roadway cut...
. Material removed from cuts is ideally balanced by material needed for fills
Cut and fill
In earthmoving, cut and fill is the process of constructing a railway, road or canal whereby the amount of material from cuts roughly matches the amount of fill needed to make nearby embankments, so minimizing the amount of construction labor...
along the same route, but this is not always the case when cut material is unsuitable for use as fill.

The word is also used in the same sense in mining, as in an open cut
Open-pit mining
Open-pit mining or opencast mining refers to a method of extracting rock or minerals from the earth by their removal from an open pit or borrow....
mine.

The term cutting appears in the 19th century literature to designate rock cuts developed to moderate grades of railway lines. Railway Age's Comprehensive Railroad Dictionary defines a cut as "a passage cut for the roadway through an obstacle of rock or dirt."

There are at least two types of cut, sidehill cut and through cut. The former permits passage of a transportation route alongside of or around a hill, where the slope is transverse to the roadway. A sidehill cut can be formed through removal only, cutting on the high side balanced by filling on the low side, or less commonly, by building up fill to achieve a flat surface for the route. In contrast, through cuts require removal of material where the adjacent grade is higher on both sides of the route. In this case, "little or no material can be excavated by sidecasting", i.e., removed material cannot be dumped alongside the route.