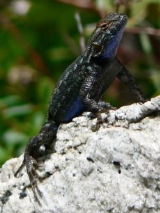 Encyclopedia
The western fence lizard (Sceloporus occidentalis) is a common lizard
Lizard
Lizards are a widespread group of squamate reptiles, with nearly 3800 species, ranging across all continents except Antarctica as well as most oceanic island chains...
of California
California
California is a state located on the West Coast of the United States. It is by far the most populous U.S. state, and the third-largest by land area...
and the surrounding area. Because the ventral abdomen of an adult is characteristically blue, it is also known as the blue-belly. Immature western fence lizards have aquamarine-colored bellies.

It is a member of the genus
Genus
In biology, a genus is a low-level taxonomic rank used in the biological classification of living and fossil organisms, which is an example of definition by genus and differentia...
Sceloporus, and therefore is a spiny lizard
Spiny lizard
The spiny lizards are the genus Sceloporus in the family Phrynosomatidae. This genus includes some of the most commonly seen lizards in the United States.- Taxonomy :...
.

Taxonomy for the western fence lizard has been under much debate. S. occidentalis belongs in the order Squamata
Squamata
Squamata, or the scaled reptiles, is the largest recent order of reptiles, including lizards and snakes. Members of the order are distinguished by their skins, which bear horny scales or shields. They also possess movable quadrate bones, making it possible to move the upper jaw relative to the...
(snakes and lizards) and the suborder Iguania
Iguania
Iguania is the suborder of Squamata that contains the iguanas, chameleons, agamids, and "New World lizards" such as anoles and Phrynosomatidae...
. The family in which it belongs is still under scrutiny. The family Phrynosomatidae
Phrynosomatidae
Phrynosomatidae is a diverse family of lizards, found from Panama to the extreme south of Canada. Many members of the group are adapted to life in hot, sandy deserts, although the spiny lizards prefer rocky deserts or even relatively moist forest edges, and the short-horned lizard lives in prairie...
, along with seven other families, used to be included in the single family Iguanidae
Iguanidae
Iguanidae is a family of lizards, composed of iguanas and related species.-Classification of Iguanidae:Two different classification schemes have been used to define the structure of this family. These are the "traditional" classification and the classification presented by Frost et al. .Frost et...
, until Frost and Etheridge's (1989) analysis of iguanian systematics suggested the family be divided. Some literature, however, still places the phrynosomatids in Iguanidae.

Six subspecies are recognized, as follows:

Some authors have raised the island fence lizard to specific
Species
In biology, a species is one of the basic units of biological classification and a taxonomic rank. A species is often defined as a group of organisms capable of interbreeding and producing fertile offspring. While in many cases this definition is adequate, more precise or differing measures are...
rank, Sceloporus becki. However, recent work in molecular systematics has suggested there are four clade
Clade
A clade is a group consisting of a species and all its descendants. In the terms of biological systematics, a clade is a single "branch" on the "tree of life". The idea that such a "natural group" of organisms should be grouped together and given a taxonomic name is central to biological...
s and 11 genetically separable populations, and the subspecies
Subspecies
Subspecies in biological classification, is either a taxonomic rank subordinate to species, ora taxonomic unit in that rank . A subspecies cannot be recognized in isolation: a species will either be recognized as having no subspecies at all or two or more, never just one...
will probably have to be redefined.

Western fence lizards measure 5.7-8.9 cm (snout-vent length) and a total length of about 21 cm. They are brown to black in color (the brown may be sandy or greenish), but their most distinguishing characteristic is their bright blue belly. The ventral sides of the limbs are yellow. These lizards also have blue patches on their throats. This bright coloration is faint or absent in both females and juveniles. The scales of S. occidentalis are sharply keeled, and between the interparietal and rear of thighs, there are 35-57 scales.

Many other lizards have similar bright blue coloring. The eastern fence lizard
Eastern fence lizard
The eastern fence lizard is a medium-sized species of lizard found along forest edges, rock piles, and rotting logs or stumps in the eastern United States...
, S. undulatus, instead of having one large patch on its throat, has two small patches. The sagebrush lizard, S. graciosus, lacks yellow limbs and has smaller dorsal scales. S. occidentalis also resembles the side-blotched lizard
Side-blotched lizard
Side-blotched lizards are lizards of the genus Uta. They are some of the most abundant and commonly observed lizards in the deserts of western North America. They commonly grow to six inches including the tail, with the males normally being the larger sex. Males often have bright throat colors....
, Uta stansburiana. However, the axilla of U. stansburiana usually has a black spot behind it and it has a complete gular fold
Gular fold
A gular fold is a feature of the body of lizards. it is found on the ventral throat, and looks like a collar.-See also:* Gular , gular anatomical formations in other species...
.

Although California is the heart of the range of this lizard, it is also found in eastern and southwest Oregon
Oregon
Oregon is a state in the Pacific Northwest region of the United States. It is located on the Pacific coast, with Washington to the north, California to the south, Nevada on the southeast and Idaho to the east. The Columbia and Snake rivers delineate much of Oregon's northern and eastern...
, as well as in the Columbia River Gorge
Columbia River Gorge
The Columbia River Gorge is a canyon of the Columbia River in the Pacific Northwest of the United States. Up to deep, the canyon stretches for over as the river winds westward through the Cascade Range forming the boundary between the State of Washington to the north and Oregon to the south...
, southwest Idaho
Idaho
Idaho is a state in the Rocky Mountain area of the United States. The state's largest city and capital is Boise. Residents are called "Idahoans". Idaho was admitted to the Union on July 3, 1890, as the 43rd state....
, Nevada
Nevada
Nevada is a state in the western, mountain west, and southwestern regions of the United States. With an area of and a population of about 2.7 million, it is the 7th-largest and 35th-most populous state. Over two-thirds of Nevada's people live in the Las Vegas metropolitan area, which contains its...
, western Utah
Utah
Utah is a state in the Western United States. It was the 45th state to join the Union, on January 4, 1896. Approximately 80% of Utah's 2,763,885 people live along the Wasatch Front, centering on Salt Lake City. This leaves vast expanses of the state nearly uninhabited, making the population the...
, and northwestern Baja California
Baja California
Baja California officially Estado Libre y Soberano de Baja California is one of the 31 states which, with the Federal District, comprise the 32 Federal Entities of Mexico. It is both the northernmost and westernmost state of Mexico. Before becoming a state in 1953, the area was known as the North...
, and some of the islands off the coast of both California and Baja California.

The western fence lizard occupies a variety of habitats. It is found in grassland, broken chaparral
Chaparral
Chaparral is a shrubland or heathland plant community found primarily in the U.S. state of California and in the northern portion of the Baja California peninsula, Mexico...
, sagebrush, woodland, coniferous forest, and farmland, and occupies elevations from sea level to 10,800 ft. They generally avoid the harsh desert.

As of now, the western fence lizard is listed as unprotected, and no conservation restrictions apply.

These lizards are commonly seen sunning on paths, rocks, and fence posts, and other high places, which makes them an easy target for predation
Predation
In ecology, predation describes a biological interaction where a predator feeds on its prey . Predators may or may not kill their prey prior to feeding on them, but the act of predation always results in the death of its prey and the eventual absorption of the prey's tissue through consumption...
by snakes, birds, and even some mammals, such as shrews. They protect themselves by employing their fast reflexes, which is common in many other lizards.

Like most other lizards, S. occidentalis goes through a period of hibernation
Hibernation
Hibernation is a state of inactivity and metabolic depression in animals, characterized by lower body temperature, slower breathing, and lower metabolic rate. Hibernating animals conserve food, especially during winter when food supplies are limited, tapping energy reserves, body fat, at a slow rate...
during the winter. The length of time and when they emerge varies depending on climate. During the mating season, adult males will defend a home range.

Western fence lizards mate in the spring, and do not breed until the spring of their second year. Females lay one to three clutches of three to 17 eggs (usually eight) between April and July. The eggs hatch in August. 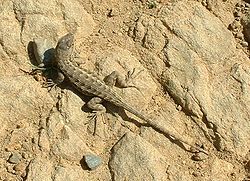 Studies have shown that Lyme disease is lower in areas where the lizards occur. When ticks carrying Lyme disease feed on these lizards' blood (which they commonly do, especially around their ears), a protein in their blood kills the bacterium that causes Lyme disease. The ticks blood is therefore cleansed and no longer carries Lyme disease.