Encyclopedia
The Weissenhof Estate is a housing estate
Housing estate
A housing estate is a group of buildings built together as a single development. The exact form may vary from country to country. Accordingly, a housing estate is usually built by a single contractor, with only a few styles of house or building design, so they tend to be uniform in appearance...
built for exhibition in Stuttgart
Stuttgart
Stuttgart is the capital of the state of Baden-Württemberg in southern Germany. The sixth-largest city in Germany, Stuttgart has a population of 600,038 while the metropolitan area has a population of 5.3 million ....
in 1927. It was an international showcase of what later became known as the International style
International style (architecture)
The International style is a major architectural style that emerged in the 1920s and 1930s, the formative decades of Modern architecture. The term originated from the name of a book by Henry-Russell Hitchcock and Philip Johnson, The International Style...
of modern architecture
Modern architecture
Modern architecture is generally characterized by simplification of form and creation of ornament from the structure and theme of the building. It is a term applied to an overarching movement, with its exact definition and scope varying widely...
.

The estate was built for the Deutscher Werkbund
Deutscher Werkbund
The Deutscher Werkbund was a German association of artists, architects, designers, and industrialists. The Werkbund was to become an important event in the development of modern architecture and industrial design, particularly in the later creation of the Bauhaus school of design...
exhibition of 1927
1927 in architecture
The year 1927 in architecture involved some significant events.-Buildings:*Weissenhof Estate in Stuttgart, designed by a team led by Ludwig Mies van der Rohe is completed.*Battersea Power Station in London, designed by Giles Gilbert Scott....
, and included twenty-one buildings comprising sixty dwellings, designed by seventeen European architect
Architect
An architect is a person trained in the planning, design and oversight of the construction of buildings. To practice architecture means to offer or render services in connection with the design and construction of a building, or group of buildings and the space within the site surrounding the...
s, most of them German-speaking. The German architect Mies van der Rohe was in charge of the project on behalf of the city, and it was he who selected the architects, budgeted and coordinated their entries, prepared the site, and oversaw construction. Le Corbusier
Le Corbusier
Charles-Édouard Jeanneret, better known as Le Corbusier , was a Swiss-born French architect, designer, urbanist, writer and painter, famous for being one of the pioneers of what now is called modern architecture. He was born in Switzerland and became a French citizen in 1930...
was awarded the two prime sites, facing the city, and by far the largest budget.

The twenty-one buildings vary slightly in form, consisting of terrace
Terraced house
In architecture and city planning, a terrace house, terrace, row house, linked house or townhouse is a style of medium-density housing that originated in Great Britain in the late 17th century, where a row of identical or mirror-image houses share side walls...
d and detached houses and apartment buildings, and display a strong consistency of design. What they have in common are their simplified facade
Facade
A facade or façade is generally one exterior side of a building, usually, but not always, the front. The word comes from the French language, literally meaning "frontage" or "face"....
s, flat roof
Roof
A roof is the covering on the uppermost part of a building. A roof protects the building and its contents from the effects of weather. Structures that require roofs range from a letter box to a cathedral or stadium, dwellings being the most numerous....
s used as terraces, window
Window
A window is a transparent or translucent opening in a wall or door that allows the passage of light and, if not closed or sealed, air and sound. Windows are usually glazed or covered in some other transparent or translucent material like float glass. Windows are held in place by frames, which...
bands, open plan
Open plan
Open plan is the generic term used in architectural and interior design for any floor plan which makes use of large, open spaces and minimizes the use of small, enclosed rooms such as private offices...
interiors, and the high level of prefabrication
Prefabrication
Prefabrication is the practice of assembling components of a structure in a factory or other manufacturing site, and transporting complete assemblies or sub-assemblies to the construction site where the structure is to be located...
which permitted their erection in just five months. All but two of the entries were white. Bruno Taut
Bruno Taut
Bruno Julius Florian Taut , was a prolific German architect, urban planner and author active during the Weimar period....
had his entry, the smallest, painted a bright red.

Advertised as a prototype of future workers' housing, in fact each of these houses was customized and furnished on a budget far out of a normal workers reach, and with little direct relevance to the technical challenges of standardized mass construction. The exhibition opened to the public on July 23, 1927, a year late, and drew large crowds. 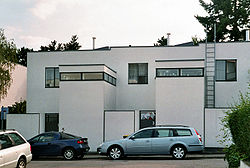 Of the original twenty-one buildings, eleven survive as of 2006. Bombing damage during World War II
World War II
World War II, or the Second World War , was a global conflict lasting from 1939 to 1945, involving most of the world's nations—including all of the great powers—eventually forming two opposing military alliances: the Allies and the Axis...
is responsible for the complete loss of the homes by Gropius, Hilberseimer, Bruno Taut, Poelzig, Max Taut (home 24), and Döcker. Another of Max Taut's homes (23) was demolished in the 1950s, as was Rading's. 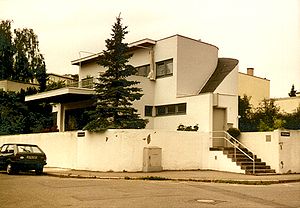