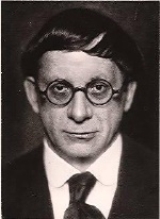 Encyclopedia
Hans Poelzig was a German
Germans
The Germans are a Germanic ethnic group native to Central Europe. The English term Germans has referred to the German-speaking population of the Holy Roman Empire since the Late Middle Ages....
architect, painter and set designer.

In 1903 he became a teacher and director at the Breslau Academy of Art and Design (Kunst- und Gewerbeschule Breslau; today Wrocław, Poland). From 1920-1935 he taught at the Technical University of Berlin
Technical University of Berlin
The Technische Universität Berlin is a research university located in Berlin, Germany. Translating the name into English is discouraged by the university, however paraphrasing as Berlin Institute of Technology is recommended by the university if necessary .The TU Berlin was founded...
(Technische Hochschule Berlin).
Director of the Architecture Department of the Prussian Academy of Arts
Prussian Academy of Arts
The Prussian Academy of Arts was an art school set up in Berlin, Brandenburg, in 1694/1696 by prince-elector Frederick III, in personal union Duke Frederick I of Prussia, and later king in Prussia. It had a decisive influence on art and its development in the German-speaking world throughout its...
in Berlin
Berlin
Berlin is the capital city of Germany and is one of the 16 states of Germany. With a population of 3.45 million people, Berlin is Germany's largest city. It is the second most populous city proper and the seventh most populous urban area in the European Union...
.

After finishing his architectural education around the turn of the century, Poelzig designed many industrial buildings. He designed the 51.2 m tall Upper Silesia Tower in Posen (today Poznań
Poznan
Poznań is a city on the Warta river in west-central Poland, with a population of 556,022 in June 2009. It is among the oldest cities in Poland, and was one of the most important centres in the early Polish state, whose first rulers were buried at Poznań's cathedral. It is sometimes claimed to be...
) for an industrial fair in 1911. It later became a water tower. He was appointed city architect of Dresden
Dresden
Dresden is the capital city of the Free State of Saxony in Germany. It is situated in a valley on the River Elbe, near the Czech border. The Dresden conurbation is part of the Saxon Triangle metropolitan area....
in 1916. He was an influential member of the Deutscher Werkbund
Deutscher Werkbund
The Deutscher Werkbund was a German association of artists, architects, designers, and industrialists. The Werkbund was to become an important event in the development of modern architecture and industrial design, particularly in the later creation of the Bauhaus school of design...
.

Poelzig was also known for his distinctive 1919 interior redesign of the Berlin Grosses Schauspielhaus for Weimar impresario Max Reinhardt
Max Reinhardt (theatre director)
----Max Reinhardt was an Austrian theater and film director and actor.-Biography:...
, and for his vast architectural set designs for the 1920 UFA
Universum Film AG
Universum Film AG, better known as UFA or Ufa, is a film company that was the principal film studio in Germany, home of the German film industry during the Weimar Republic and through World War II, and a major force in world cinema from 1917 to 1945...
film production of The Golem: How He Came Into the World
The Golem: How He Came Into the World
The Golem: How He Came Into the World is a 1920 silent horror film by Paul Wegener. It was directed by Carl Boese and Wegener, written by Wegener and Henrik Galeen, and starred Wegener as the golem. The script was adapted from the 1915 novel The Golem by Gustav Meyrink...
. (Poelzig mentored Edgar Ulmer on that film; when Ulmer directed the 1934 film noir
Film noir
Film noir is a cinematic term used primarily to describe stylish Hollywood crime dramas, particularly those that emphasize cynical attitudes and sexual motivations. Hollywood's classic film noir period is generally regarded as extending from the early 1940s to the late 1950s...
Universal Studios
Universal Studios
Universal Pictures , a subsidiary of NBCUniversal, is one of the six major movie studios....
production of The Black Cat
The Black Cat (1934 film)
The Black Cat is a 1934 horror film that became Universal Pictures' biggest box office hit of the year. It was the first of eight movies to pair actors Béla Lugosi and Boris Karloff. Edgar G. Ulmer directed the film; Peter Ruric wrote the screenplay...
, he returned the favor by naming the architect-Satanic-high-priest villain character "Hjalmar Poelzig", played by Boris Karloff
Boris Karloff
William Henry Pratt , better known by his stage name Boris Karloff, was an English actor.Karloff is best remembered for his roles in horror films and his portrayal of Frankenstein's monster in Frankenstein , Bride of Frankenstein , and Son of Frankenstein...
.)

With his Weimar architect contemporaries like Bruno Taut
Bruno Taut
Bruno Julius Florian Taut , was a prolific German architect, urban planner and author active during the Weimar period....
and Ernst May
Ernst May
Ernst May was a German architect and city planner.May successfully applied urban design techniques to the city of Frankfurt am Main during Germany's Weimar period, and in 1930 less successfully exported those ideas to Soviet Union cities, newly created under Stalinist rule...
, Poelzig's work developed through Expressionism
Expressionist architecture
Expressionist architecture was an architectural movement that developed in Europe during the first decades of the 20th century in parallel with the expressionist visual and performing arts....
and the New Objectivity
New Objectivity (architecture)
The New Objectivity is a name often given to the Modern architecture that emerged in Europe, primarily German-speaking Europe, in the 1920s and 30s. It is also frequently called Neues Bauen...
in the mid-1920s before arriving at a more conventional, economical style. In 1927 he was one of the exhibitors in the first International Style
International style (architecture)
The International style is a major architectural style that emerged in the 1920s and 1930s, the formative decades of Modern architecture. The term originated from the name of a book by Henry-Russell Hitchcock and Philip Johnson, The International Style...
project, the Weissenhof Estate
Weissenhof Estate
The Weissenhof Estate is a housing estate built for exhibition in Stuttgart in 1927...
in Stuttgart
Stuttgart
Stuttgart is the capital of the state of Baden-Württemberg in southern Germany. The sixth-largest city in Germany, Stuttgart has a population of 600,038 while the metropolitan area has a population of 5.3 million ....
. In the 1920s he ran the "Studio Poelzig" in partnershp with his wife Marlene (Nee Moeschke) (1894–1985). Poelzig also designed the 1929 Broadcasting House in the Berlin suburb of Charlottenburg
Charlottenburg
Charlottenburg is a locality of Berlin within the borough of Charlottenburg-Wilmersdorf, named after Queen consort Sophia Charlotte...
, a landmark of architecture, and Cold War
Cold War
The Cold War was the continuing state from roughly 1946 to 1991 of political conflict, military tension, proxy wars, and economic competition between the Communist World—primarily the Soviet Union and its satellite states and allies—and the powers of the Western world, primarily the United States...
and engineering history. 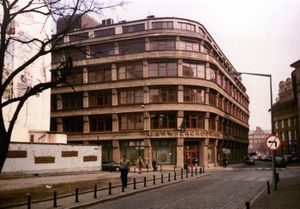 Poelzig's single best-known building is the enormous and legendary I.G. Farben Building, completed in 1931 as the administration building for IG Farben
IG Farben
I.G. Farbenindustrie AG was a German chemical industry conglomerate. Its name is taken from Interessen-Gemeinschaft Farbenindustrie AG . The company was formed in 1925 from a number of major companies that had been working together closely since World War I...
in Frankfurt am Main, now known as the Poelzig Building at Goethe University. In March 1945 the building was occupied by American Allied forces under Eisenhower, became his headquarters, and remained in American hands until 1995. Some of his designs that were never built included one for the Palace of the Soviets and one for the League of Nations
League of Nations
The League of Nations was an intergovernmental organization founded as a result of the Paris Peace Conference that ended the First World War. It was the first permanent international organization whose principal mission was to maintain world peace...
headquarters at Geneva.

Poelzig died in Berlin in June 1936, shortly before his planned departure for Ankara
Ankara
Ankara is the capital of Turkey and the country's second largest city after Istanbul. The city has a mean elevation of , and as of 2010 the metropolitan area in the entire Ankara Province had a population of 4.4 million....
.