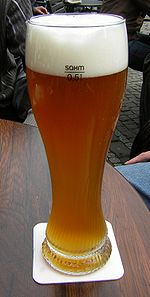 Weissbier also known as Weizenbier ("wheat beer"), is a Bavaria
Bavaria
Bavaria, formally the Free State of Bavaria is a state of Germany, located in the southeast of Germany. With an area of , it is the largest state by area, forming almost 20% of the total land area of Germany...
n specialty beer
Beer
Beer is the world's most widely consumed andprobably oldest alcoholic beverage; it is the third most popular drink overall, after water and tea. It is produced by the brewing and fermentation of sugars, mainly derived from malted cereal grains, most commonly malted barley and malted wheat...
in which a significant proportion of malt
Malt
Malt is germinated cereal grains that have been dried in a process known as "malting". The grains are made to germinate by soaking in water, and are then halted from germinating further by drying with hot air...
ed barley
Barley
Barley is a major cereal grain, a member of the grass family. It serves as a major animal fodder, as a base malt for beer and certain distilled beverages, and as a component of various health foods...
is replaced with malted wheat
Wheat
Wheat is a cereal grain, originally from the Levant region of the Near East, but now cultivated worldwide. In 2007 world production of wheat was 607 million tons, making it the third most-produced cereal after maize and rice...
: a wheat beer
Wheat beer
Wheat beer is a beer that is brewed with a large proportion of wheat. Wheat beers often also contain a significant proportion of malted barley. Wheat beers are usually top-fermented...
. By German
Germany
Germany , officially the Federal Republic of Germany , is a federal parliamentary republic in Europe. The country consists of 16 states while the capital and largest city is Berlin. Germany covers an area of 357,021 km2 and has a largely temperate seasonal climate...
law, Weissbiers brewed in Germany must be top-fermented. Specialized strains of yeast
Yeast
Yeasts are eukaryotic micro-organisms classified in the kingdom Fungi, with 1,500 species currently described estimated to be only 1% of all fungal species. Most reproduce asexually by mitosis, and many do so by an asymmetric division process called budding...
are used which produce overtones of banana and clove as by-products of fermentation.

Weissbier is so called because it was, at the time of its inception, paler in color than Munich brown beer. It is well-known throughout Germany, though better known as Weizen (literally, "wheat") outside Bavaria.

Weissbiers feature fermentation by-products such as ester
Ester
Esters are chemical compounds derived by reacting an oxoacid with a hydroxyl compound such as an alcohol or phenol. Esters are usually derived from an inorganic acid or organic acid in which at least one -OH group is replaced by an -O-alkyl group, and most commonly from carboxylic acids and...
s (which lend fruity flavors and aromas), especially amyl acetate
Amyl acetate
Amyl acetate is an organic compound and an ester with the chemical formula CH3COO[CH2]4CH3 and the molecular weight 130.19 g/mol. It has a scent similar to bananas and apples which is not detectable by all people. The compound is the condensation product of acetic acid and 1-pentanol...
, reminiscent of bananas, and the phenolic compound
Natural phenol
Natural phenols, bioavailable phenols, plant phenolics, low molecular weight phenols or phenoloids are a class of natural products. They are small molecules containing one or more phenolic group. These molecules are smaller in size than polyphenols, containing less than 12 phenolic groups...
guaiacol
Guaiacol
Guaiacol is a naturally occurring organic compound with the formula C6H4. Although it is biosynthesized by a variety of organisms, this colorless aromatic oil is usually derived from guaiacum or wood creosote. Samples darken upon exposure to air and light. Guaiacol is present in wood smoke,...
, a metabolite of ferulic acid
Ferulic acid
Ferulic acid is a hydroxycinnamic acid, a type of organic compound. It is an abundant phenolic phytochemical found in plant cell wall components such as arabinoxylans as covalent side chains. It is related to trans-cinnamic acid. As a component of lignin, ferulic acid is a precursor in the...
, which smells and tastes like clove
Clove
Cloves are the aromatic dried flower buds of a tree in the family Myrtaceae. Cloves are native to the Maluku islands in Indonesia and used as a spice in cuisines all over the world...
s. Other phenolics sometimes found in Weissbiers evoke medicinal or smoky sensations. The bittering level of most Weissbiers is close to 15 International Bitterness Units, a relatively low level. Hop flavor and aroma are typically low.

The ester and phenolic aspects are produced by the special type of yeast, rather than the high fraction of wheat in the grain bill.

The carbonation
Carbonation
Carbonation is the process of dissolving carbon dioxide in water. The process usually involves carbon dioxide under high pressure. When the pressure is reduced, the carbon dioxide is released from the solution as small bubbles, which cause the solution to "fizz." This effect is seen in carbonated...
level can range from 5.5 grams per liter (approximately 2.7 volumes; slightly higher than that of most other German beers) to 7 grams per liter, or more. This produces a generous stand of foam, especially in light of the high protein content of wheat malt.

Some prominent commercial examples of Weissbier are produced by Hopf, Paulaner
Paulaner
Paulaner is a German brewery, established in the early 17th century in Munich by the Minim friars of the Neudeck ob der Au cloister. The mendicant order and the brewery are named after Francis of Paola, the founder of the order....
, Erdinger
Erdinger
The Privatbrauerei Erdinger Weißbräu Werner Brombach GmbH is a brewery in Erding, Germany. Its best-known products are its namesake Weißbiers .-History:...
, Schneider Weisse
G. Schneider & Sohn
-External links:**...
, Franziskaner, Rothaus
Rothaus
The Badische Staatsbrauerei Rothaus is a brewery located 1000m above sea level in the town of Grafenhausen in Germany's Black Forest. It is one of Germany's most successful and profitable regional breweries, and in the past decade has become well-known outside of Baden as well...
, Hacker-Pschorr, Gutmann, Ayinger (Bräu Weisse) and Weihenstephan
Weihenstephan
Weihenstephan is a part of Freising north of Munich, Germany.Weihenstephan is known for:* the site of one of the three campuses of the Technische Universität München , namely the one for life sciences* the Fachhochschule Weihenstephan...
. Breweries in Austria also produce authentic examples, as do other breweries throughout the world.

Some beers produced in the United States labeled as "Hefeweizen" are quite different, and actually refer to a different type of beer. Nevertheless, some North American-brewed beers identifying themselves using the names above are reasonably accurate examples. These include beers from, among others, High Point Brewery in Butler, New Jersey, Gordon Biersch, and the Brooklyn Brewery
Brooklyn Brewery
Brooklyn Brewery was started in 1987 by former Associated Press correspondent Steve Hindy and former Chemical Bank lending officer Tom Potter. Hindy learned to brew beer during a six year stay in various Middle Eastern nations such as Saudi Arabia and Syria, where possession and consumption of...
.

The traditional Weissbier glass has a rated capacity of one-half liter, plus additional room for the foam, is relatively slender, and tapers slightly towards the base.

Pouring Weissbier into the glass requires a bit of practice, as one has to avoid producing too much head. The two techniques are illustrated here, performed by industrial robot
Industrial robot
An industrial robot is defined by ISO as an automatically controlled, reprogrammable, multipurpose manipulator programmable in three or more axes...
s programmed by students of two Bavarian universities: This robot demonstrates the technique of holding the opening of the bottle close to the rim of the glass, while this robot uses the faster, immersion technique preferred by bartenders. Note the swivelling of the nearly empty bottle: This serves to pick up the yeast, an important part to unfiltered beer's complete taste, although a controversy about this procedure exists.
In fact, it was very uncommon to pick up the yeast until the 1970s when the first "Kristallweizen" hit the market in Germany.
Due to the extremely bitter taste of yeast it was never supposed to be served with the beer, but to remain inside the bottle until then.
(The outside of the bottle should never come into contact with either the glass or the beer in the glass, as it may be contaminated with dirt, exhaust fumes etc.)