Encyclopedia
Cytadela is a 19th-century fortress in Warsaw
Warsaw
Warsaw is the capital and largest city of Poland. It is located on the Vistula River, roughly from the Baltic Sea and from the Carpathian Mountains. Its population in 2010 was estimated at 1,716,855 residents with a greater metropolitan area of 2,631,902 residents, making Warsaw the 10th most...
, Poland
Poland
Poland , officially the Republic of Poland , is a country in Central Europe bordered by Germany to the west; the Czech Republic and Slovakia to the south; Ukraine, Belarus and Lithuania to the east; and the Baltic Sea and Kaliningrad Oblast, a Russian exclave, to the north...
. It was built by order of Tsar Nicholas I after the suppression of the 1830 November Uprising
November Uprising
The November Uprising , Polish–Russian War 1830–31 also known as the Cadet Revolution, was an armed rebellion in the heartland of partitioned Poland against the Russian Empire. The uprising began on 29 November 1830 in Warsaw when the young Polish officers from the local Army of the Congress...
in order to bolster imperial Russian control of the city. It served as a prison into the late 1930s.

The Citadel was built by personal order of Tsar Nicholas I after the 1830 November Uprising
November Uprising
The November Uprising , Polish–Russian War 1830–31 also known as the Cadet Revolution, was an armed rebellion in the heartland of partitioned Poland against the Russian Empire. The uprising began on 29 November 1830 in Warsaw when the young Polish officers from the local Army of the Congress...
. Its chief architect, Major General
Major General
Major general or major-general is a military rank used in many countries. It is derived from the older rank of sergeant major general. A major general is a high-ranking officer, normally subordinate to the rank of lieutenant general and senior to the ranks of brigadier and brigadier general...
Johan Jakob von Daehn (Ivan Dehn), used the plan of the citadel in Antwerp as the basis for his own plan (the same that was demolished by the French
Siege of Antwerp (1832)
The siege of the citadel of Antwerp took place after fighting in the Belgian Revolution ended. It occurred from 15 November to 23 December 1832 and faced off Dutch troops occupying Antwerp's citadel against France's Armée du Nord...
later that year). The cornerstone
Cornerstone
The cornerstone concept is derived from the first stone set in the construction of a masonry foundation, important since all other stones will be set in reference to this stone, thus determining the position of the entire structure.Over time a cornerstone became a ceremonial masonry stone, or...
was laid by Field Marshal Ivan Paskevich
Ivan Paskevich
Ivan Fyodorovich Paskevich was a Ukrainian-born military leader. For his victories, he was made Count of Erivan in 1828 and Namestnik of the Kingdom of Poland in 1831...
, de facto viceroy
Viceroy
A viceroy is a royal official who runs a country, colony, or province in the name of and as representative of the monarch. The term derives from the Latin prefix vice-, meaning "in the place of" and the French word roi, meaning king. A viceroy's province or larger territory is called a viceroyalty...
of Congress Poland
Congress Poland
The Kingdom of Poland , informally known as Congress Poland , created in 1815 by the Congress of Vienna, was a personal union of the Russian parcel of Poland with the Russian Empire...
.

The fortress is a pentagon-shaped brick structure with high outer walls, enclosing an area of 36 hectares. Its construction required the demolition of 76 residential buildings and the forcible resettlement of 15,000 inhabitants.

Work on it commenced May 31, 1832, on the site of a demolished monastery and of the estate of Fawory. Officially it ended May 4, 1834, to mark the 18th birthday of Russian Crown Prince Alexander
Alexander II of Russia
Alexander II , also known as Alexander the Liberator was the Emperor of the Russian Empire from 3 March 1855 until his assassination in 1881...
, for whom it was named. In reality, however, the fortress was not completed until 1874. The cost of construction came to 11 million rubles (roughly 8.5 tonnes of pure gold or 128 million euro at today's' prices), a colossal sum by 19th-century standards, and was borne entirely by the city of Warsaw and the Bank of Poland
Bank of Poland
Bank Polski is the name of two former banks in Poland, each of which acted as a central bank. The first was founded by Franciszek Ksawery Drucki-Lubecki in 1828 in Congress Poland and functioned until 1885, when it was absorbed by the State Bank of the Russian Empire.The second was founded in 1924...
, as yet another punishment for the failed uprising. 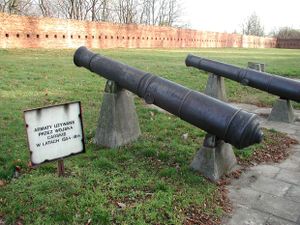 In peacetime, some 5,000 Russian troops were stationed there. During the 1863 January Uprising
January Uprising
The January Uprising was an uprising in the former Polish-Lithuanian Commonwealth against the Russian Empire...
, the garrison
Garrison
Garrison is the collective term for a body of troops stationed in a particular location, originally to guard it, but now often simply using it as a home base....
was reinforced to over 16,000. By 1863 the fortress housed 555 artillery
Artillery
Originally applied to any group of infantry primarily armed with projectile weapons, artillery has over time become limited in meaning to refer only to those engines of war that operate by projection of munitions far beyond the range of effect of personal weapons...
pieces of various calibers, and could cover most of the city center with artillery fire.

About the fortress 104 prison casemate
Casemate
A casemate, sometimes rendered casement, is a fortified gun emplacement or armored structure from which guns are fired. originally a vaulted chamber in a fortress.-Origin of the term:...
s were built, providing cells for 2,940, mostly political, prisoners. The list of Poles imprisoned and/or executed there up through World War I
World War I
World War I , which was predominantly called the World War or the Great War from its occurrence until 1939, and the First World War or World War I thereafter, was a major war centred in Europe that began on 28 July 1914 and lasted until 11 November 1918...
reads like a Who's Who of notable patriots and revolutionaries. They include persons as diverse as Apollo Korzeniowski
Apollo Korzeniowski
Apollo Korzeniowski was a Polish poet, playwright, clandestine political activist, and father of Polish-English novelist Joseph Conrad.-Life:...
, writer, political activist and father of Joseph Conrad
Joseph Conrad
Joseph Conrad was a Polish-born English novelist.Conrad is regarded as one of the great novelists in English, although he did not speak the language fluently until he was in his twenties...
; Romuald Traugutt
Romuald Traugutt
Romuald Traugutt was a Polish general and war hero, best known for commanding the January Uprising. From October 1863 to August 1864 he was Dictator of Insurrection. He headed the Polish national government from October 17, 1863 to April 20, 1864, and was president of its Foreign Affairs...
, leader of the 1863 January Uprising
January Uprising
The January Uprising was an uprising in the former Polish-Lithuanian Commonwealth against the Russian Empire...
; Jarosław Dąbrowski, later military chief of the 1871 Paris Commune
Paris Commune
The Paris Commune was a government that briefly ruled Paris from March 18 to May 28, 1871. It existed before the split between anarchists and Marxists had taken place, and it is hailed by both groups as the first assumption of power by the working class during the Industrial Revolution...
; Feliks Dzierżyński, a leader of the Russian Revolution of 1917
Russian Revolution of 1917
The Russian Revolution is the collective term for a series of revolutions in Russia in 1917, which destroyed the Tsarist autocracy and led to the creation of the Soviet Union. The Tsar was deposed and replaced by a provisional government in the first revolution of February 1917...
and founder of the Cheka
Cheka
Cheka was the first of a succession of Soviet state security organizations. It was created by a decree issued on December 20, 1917, by Vladimir Lenin and subsequently led by aristocrat-turned-communist Felix Dzerzhinsky...
secret police; the Marxist theoretician and revolutionary, Rosa Luxemburg
Rosa Luxemburg
Rosa Luxemburg was a Marxist theorist, philosopher, economist and activist of Polish Jewish descent who became a naturalized German citizen...
; the future Marshal of Poland
Marshal of Poland
Marshal of Poland is the highest rank in the Polish Army. It has been granted to only six officers. At present, this rank is equivalent to a Field Marshal or General of the Army in other NATO armies.-History:...
, Józef Piłsudski; Piłsudski's political archrival, Roman Dmowski
Roman Dmowski
Roman Stanisław Dmowski was a Polish politician, statesman, and chief ideologue and co-founder of the National Democracy political movement, which was one of the strongest political camps of interwar Poland.Though a controversial personality throughout his life, Dmowski was instrumental in...
; and Eligiusz Niewiadomski
Eligiusz Niewiadomski
Eligiusz Niewiadomski was a Polish modernist painter and art critic who belonged to the right-wing National Democratic Party till 1904 and later continued supporting it. In 1922 he assassinated Poland's first President, Gabriel Narutowicz.-Life:Niewiadomski was born into a family of gentry descent...
, assassin of Poland's first president, Gabriel Narutowicz
Gabriel Narutowicz
Gabriel Narutowicz was a Lithuanian-born professor of hydroelectric engineering at Switzerland's Zurich Polytechnic, and Poland's Minister of Public Works , Minister of Foreign Affairs , and the first president of the Second Polish Republic....
. The Citadel's Tenth Pavilion has, since 1963, served as a museum.

Well before the turn of the 20th century, it was apparent that such traditional fortifications had been made obsolete by modern rifled
Rifling
Rifling is the process of making helical grooves in the barrel of a gun or firearm, which imparts a spin to a projectile around its long axis...
artillery. The Tsarist authorities had planned in 1913 to raze the fortress, but the process had not begun before the outbreak of World War I
World War I
World War I , which was predominantly called the World War or the Great War from its occurrence until 1939, and the First World War or World War I thereafter, was a major war centred in Europe that began on 28 July 1914 and lasted until 11 November 1918...
. In 1915 Warsaw was occupied by German
Germany
Germany , officially the Federal Republic of Germany , is a federal parliamentary republic in Europe. The country consists of 16 states while the capital and largest city is Berlin. Germany covers an area of 357,021 km2 and has a largely temperate seasonal climate...
forces with little opposition from the Russian garrison, which abandoned the fortress and withdrew east. The Germans blew up several of its structures, but the main part of the Citadel remained intact.

After Poland regained her independence in 1918, the Citadel was taken over by the Polish Army. It was used as a garrison, infantry training center, and depot for materiel
Materiel
Materiel is a term used in English to refer to the equipment and supplies in military and commercial supply chain management....
. During the 1944 Warsaw Uprising
Warsaw Uprising
The Warsaw Uprising was a major World War II operation by the Polish resistance Home Army , to liberate Warsaw from Nazi Germany. The rebellion was timed to coincide with the Soviet Union's Red Army approaching the eastern suburbs of the city and the retreat of German forces...
, its German garrison prevented Armia Krajowa
Armia Krajowa
The Armia Krajowa , or Home Army, was the dominant Polish resistance movement in World War II German-occupied Poland. It was formed in February 1942 from the Związek Walki Zbrojnej . Over the next two years, it absorbed most other Polish underground forces...
units from the city center from linking up with units from northern Warsaw's Żoliborz
Zoliborz
Żoliborz is one of the northern districts of the city of Warsaw. It is located directly to the north of the City Centre, on the left bank of the Vistula river. It has approximately 50,000 inhabitants and is one of the smallest boroughs of Warsaw....
district. The fortress survived the German occupation and in 1945 became again Polish Army property.