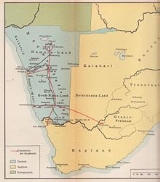 South African troops were mobilized along the border between the two countries under the command of General Henry Lukin
Henry Lukin
Major General Sir Henry Timson Lukin KCB, CMG, DSO was a South African military commander. He fought in the Anglo-Zulu War and the Basutoland Gun War , the Bechuanaland Campaign , and the Anglo-Boer War when he was in command of the artillery during the defence of Wepener for which action he was...
and Lt Col Manie Maritz
Manie Maritz
Manie Maritz was a Boer General during the Second Boer War and a leading rebel of the 1914 Boer Revolt.Maritz was born in Kimberly and christened Salmon Gerhardus Maritz and also known as Gerrit Maritz....
early in September 1914. Shortly afterward another force occupied the port of Lüderitz
Lüderitz
Lüderitz is a harbour town in south-west Namibia, lying on one of the least hospitable coasts in Africa. It is a port developed around Robert Harbour and Shark Island.- Overview :...
.

There was considerable sympathy among the Boer population of South Africa for the German cause: but twelve years had passed since the end of the Second Boer War
Second Boer War
The Second Boer War was fought from 11 October 1899 until 31 May 1902 between the British Empire and the Afrikaans-speaking Dutch settlers of two independent Boer republics, the South African Republic and the Orange Free State...
, in which Germany had offered the two tiny Boer republics
Boer Republics
The Boer Republics were independent self-governed republics created by the northeastern frontier branch of the Dutch-speaking inhabitants of the north eastern Cape Province and their descendants in mainly the northern and eastern parts of what is now the country of...
moral support against the armed might of the world-straddling British Empire
British Empire
The British Empire comprised the dominions, colonies, protectorates, mandates and other territories ruled or administered by the United Kingdom. It originated with the overseas colonies and trading posts established by England in the late 16th and early 17th centuries. At its height, it was the...
. Lieutenant-Colonel Manie Maritz, heading commando forces on the border of German South-West Africa, declared that

Maritz and several other high ranking officers rapidly gathered forces with a total of about 12,000 rebels in the Transvaal
South African Republic
The South African Republic , often informally known as the Transvaal Republic, was an independent Boer-ruled country in Southern Africa during the second half of the 19th century. Not to be confused with the present-day Republic of South Africa, it occupied the area later known as the South African...
and Orange Free State
Orange Free State
The Orange Free State was an independent Boer republic in southern Africa during the second half of the 19th century, and later a British colony and a province of the Union of South Africa. It is the historical precursor to the present-day Free State province...
, ready to fight for the cause in what became known as the Boer Revolt (also sometimes referred to as the Maritz Rebellion).

The government declared martial law on 14 October 1914, and forces loyal to the government under the command of Generals Louis Botha
Louis Botha
Louis Botha was an Afrikaner and first Prime Minister of the Union of South Africa—the forerunner of the modern South African state...
and Jan Smuts
Jan Smuts
Jan Christiaan Smuts, OM, CH, ED, KC, FRS, PC was a prominent South African and British Commonwealth statesman, military leader and philosopher. In addition to holding various cabinet posts, he served as Prime Minister of the Union of South Africa from 1919 until 1924 and from 1939 until 1948...
proceeded to destroy the rebellion. Maritz was defeated on 24 October and took refuge with the Germans; the rebellion was effectively suppressed by early February 1915. The leading Boer rebels received terms of imprisonment of six and seven years and heavy fines; however, two years later they were released from prison, as Botha recognized the value of reconciliation.

By February 1915, with the home front secure, the South Africans were ready, to begin the complete occupation of the German territory. Botha in his military capacity as a senior and experienced military commander took command of the invasion. He split his command into two with Smuts commanding the southern forces while he took direct command of the northern forces.

Botha arrived at the coastal German colonial town of Swakopmund
Swakopmund
Swakopmund is a city on the coast of northwestern Namibia, west of Windhoek, Namibia's capital. It is the capital of the Erongo administrative district. As a seaside resort, the weather is cooler here in December to January so the territorial administration moves to Swakopmund for these months...
, on 11 February to take direct command on the northern contingent, and continued to build up his invasion force at Walfish Bay (or Walvis Bay)—a South African enclave about half way long the cost of German South West Africa (see the map). By March he was ready to invade. Advancing from Swakopmund along the Swakop vally
Swakop River
The Swakop River is a major river in the western part of Namibia, reaching the sea at the southern edge of the city of Swakopmund . The Swakop is an ephemeral river, its run-off is roughly 40 million cubic metres per annum. The main tributary is the Khan...
with its railway line, his forces took Otjimbingwe
Otjimbingwe
Otjimbingwe is a settlement in the Erongo Region of central Namibia. It has approximately 8000 inhabitants.The Rhenish Mission Society used Otjimbingwe as a central location for their Namibian mission in 1849. Johannes Rath and his family settled in the area on 11 July that year, and the settlement...
, Karibib, Friedrichsfelde, Wilhelmsthal, and Okahandja
Okahandja
Okahandja is a town of 14,000 inhabitants in Otjozondjupa Region, central Namibia, and the district capital of the Okahandja electoral constituency. It is known as the Garden Town of Namibia. It is located 70km north of Windhoek on the B1 road...
and entered the colony's captial Windhuk on 5 May 1915.

The Germans then offered terms under which they would surrender, but they were rejected by Botha so the war continued. On 12 May Botha declared martial law and having effectively cut the colony in half divided his forces into four contingents under Coen Brits, Lukin, Manie Botha and Myburgh. Brits went north to Otjiwarongo
Otjiwarongo
Otjiwarongo is a city of 20,000 inhabitants in the Otjozondjupa Region of Namibia. It is the district capital of the Otjiwarongo electoral constituency and also the capital of Otjozondjupa....
, Outjo
Outjo
Outjo is a city of 6,000 inhabitants in the Kunene Region of Namibia. It is the district capital of Outjo Constituency...
and Etosha Pan which cut off German forces in the interior from the coastal regions of Kunene
Kunene Region
Kunene is one of the thirteen regions of Namibia and home to the Himba ethnic group. Compared to the rest of Namibia, it is relatively underdeveloped...
and Kaokoveld
Kaokoveld
The Kaokoveld Desert is a coastal desert of northern Namibia and southern Angola.-Setting:The Kaokoveld Desert occupies a coastal strip covering , and is bounded by the Atlantic Ocean to the west, the Namibian savanna woodlands to the east, and the Namib Desert to the south. It includes the...
. The other three columns panned out into the north east. Lukin went along the railway line (that runs from Swakopmund to Tsumeb
Tsumeb
Tsumeb is a city of 15,000 inhabitants and the largest town in Oshikoto region in northern Namibia. Tsumeb is the home of the world-famous Tsumeb mine, and the "gateway to the north" of Namibia. It is the closest town to the Etosha National Park...
. The other two columns advanced on the Lukin's right flank, Myburgh to Otavi
Otavi
Otavi is a town of 4,000 inhabitants in the Otjozondjupa Region of central Namibia. It is the district capital of the Otavi electoral constituency. Most of the area is dolomitic and the district was in the past renowned for its mineral wealth...
junction and Manie Botha's to Tsumeb and the line's terminus. The men who commanded these columns having gained their military experience fighting in Boer commandos moved very rapidly. The German forces in the north-west made a stand at Otavi
Battle of Otavi
The Battle of Otavi fought between the militaries of the Union of South Africa and German Southwest Africa on 1 July, 1915 was the final battle of the South-West Africa Campaign of World War I. The battle, fought between Otavi mountain and Otavifontein, was a delaying action led by the German Major...
on 1 July but were beaten and surrendered at Khorab on 9 July 1915.

While events were unfolding in the north, Smuts landed with another South African force at the South West Africa colony's navel base at Luderitzbucht (now called Angra Pequena). Having secured the town Smuts advanced inland capturing Keetmanshoop
Keetmanshoop
Keetmanshoop is a city in Karas Region, southern Namibia, lying on the Trans-Namib Railway from Windhoek to Upington in South Africa. It is named after Johann Keetman, a German industrialist and founder of the city....
on 20 May. Here he met up with two other columns that had advanced over the bored from South Africa one origination from the coastal town of Port Nolloth
Port Nolloth
Port Nolloth is a town and domestic seaport in the Namaqualand region on the northwestern coast of South Africa, 89 miles northwest of Springbok....
and the other from Kimberly.

Smuts advanced north along the railway line to Berseba
Berseba
Berseba is a village in the Karas Region of southern Namibia and the district capital of the Berseba electoral constituency...
and after two days fighting captured Gibeon on 26 May. The Germans in the south were forced to retreat northwards towards their capital and into the waiting arms of Botha's forces. With two weeks the German forces in the south faced with certain destruction, surrendered.