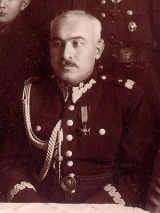 Encyclopedia
Walerian Czuma was a Polish
Poland
Poland , officially the Republic of Poland , is a country in Central Europe bordered by Germany to the west; the Czech Republic and Slovakia to the south; Ukraine, Belarus and Lithuania to the east; and the Baltic Sea and Kaliningrad Oblast, a Russian exclave, to the north...
general
General
A general officer is an officer of high military rank, usually in the army, and in some nations, the air force. The term is widely used by many nations of the world, and when a country uses a different term, there is an equivalent title given....
and military commander. He is notable for his command over a Polish unit in Siberia during the Russian Civil War
Russian Civil War
The Russian Civil War was a multi-party war that occurred within the former Russian Empire after the Russian provisional government collapsed to the Soviets, under the domination of the Bolshevik party. Soviet forces first assumed power in Petrograd The Russian Civil War (1917–1923) was a...
and the commander of the defence of Warsaw
Warsaw
Warsaw is the capital and largest city of Poland. It is located on the Vistula River, roughly from the Baltic Sea and from the Carpathian Mountains. Its population in 2010 was estimated at 1,716,855 residents with a greater metropolitan area of 2,631,902 residents, making Warsaw the 10th most...
during the siege of that city in 1939
Siege of Warsaw (1939)
The 1939 Battle of Warsaw was fought between the Polish Warsaw Army garrisoned and entrenched in the capital of Poland and the German Army...
.

At the outbreak of World War I
World War I
World War I , which was predominantly called the World War or the Great War from its occurrence until 1939, and the First World War or World War I thereafter, was a major war centred in Europe that began on 28 July 1914 and lasted until 11 November 1918...
Walerian Czuma joined the Piłsudski's Polish Legions
Polish Legions in World War I
Polish Legions was the name of Polish armed forces created in August 1914 in Galicia. Thanks to the efforts of KSSN and the Polish members of the Austrian parliament, the unit became an independent formation of the Austro-Hungarian Army...
. He was taken POW by the Russian Army and imprisoned in the infamous Butyrka prison
Butyrka prison
Butyrka prison was the central transit prison in pre-Revolutionary Russia, located in Moscow.The first references to Butyrka prison may be traced back to the 17th century. The present prison building was erected in 1879 near the Butyrsk gate on the site of a prison-fortress which had been built...
. Later he was sentenced to forced resettlement in Siberia
Siberia
Siberia is an extensive region constituting almost all of Northern Asia. Comprising the central and eastern portion of the Russian Federation, it was part of the Soviet Union from its beginning, as its predecessor states, the Tsardom of Russia and the Russian Empire, conquered it during the 16th...
. After the Russian Revolution of 1917
Russian Revolution of 1917
The Russian Revolution is the collective term for a series of revolutions in Russia in 1917, which destroyed the Tsarist autocracy and led to the creation of the Soviet Union. The Tsar was deposed and replaced by a provisional government in the first revolution of February 1917...
he started to organise Polish military units in Siberia, which eventually became known as the Polish 5th Rifle Division
Polish 5th Rifle Division
Polish 5th Siberian Rifle Division was a Polish military unit formed in 1919 in Russia during World War I. The division fought during the Polish-Bolshevik War, but as it was attached to the White Russian formations, it is considered to have fought more in the Russian Civil War...
.

From 1922 he served as the commanding officer of the 19th Infantry Division
Polish 19th Infantry Division
Polish 19th Infantry Division was formed from parts of the 1st Lithuanian-Belarusian Infantry Division in 1923. At that time it was commanded for several years by gen. Walerian Czuma and stationed in Wilno....
. Between 1927 and 1928 he was the commander of the Wilno Fortified Area. Later he was the commanding officer of the 5th Division
Polish 5th Infantry Division
5th Lwów Infantry Division was a unit of the Polish Army in the interbellum period, with headquarters stationed in Lwów. It was created on May 20, 1919, during the Polish-Ukrainian War in Eastern Galicia. Originally, it consisted of three infantry regiments, but later it was strengthened with...
. In March 1938 he was assigned to the Ministry of Internal Affairs as the commanding officer of the Border Guard
Border Guard (Poland)
Border Guard is a Polish state security agency tasked with patrol of the Polish border. It existed in the Second Polish Republic from 1928 to 1939 and was recreated in Third Polish Republic in 1990.- 1928-1939 :...
s (Polish
Polish language
Polish is a language of the Lechitic subgroup of West Slavic languages, used throughout Poland and by Polish minorities in other countries...
Straż Graniczna). Between the wars Czuma was also an active member of several social organisations, among them the Guards of the Graves of Polish Heroes society which initiated the construction of Lwów Eagles mausoleum in Łyczaków Cemetery in Lwów.

On 28 September 1939, Czuma was taken POW by the Germans and remained in various POW camps for the rest of the World War II
World War II
World War II, or the Second World War , was a global conflict lasting from 1939 to 1945, involving most of the world's nations—including all of the great powers—eventually forming two opposing military alliances: the Allies and the Axis...
. After he was liberated from the Oflag VII-A Murnau
Oflag VII-A Murnau
Oflag VII-A Murnau was a German Army POW camp for Polish Army officers and generals during World War II. It was located in the Bavarian town of Murnau am Staffelsee....
POW camp in Murnau am Staffelsee
Murnau am Staffelsee
Murnau am Staffelsee is a market town in the district of Garmisch-Partenkirchen, in the Oberbayern region of Bavaria, Germany.Murnau is situated on the edge of the Bavarian alps, approx. 70 km south of Munich. Directly to its west is the Staffelsee lake.-History:Murnau was first documented in...
, Germany
Germany
Germany , officially the Federal Republic of Germany , is a federal parliamentary republic in Europe. The country consists of 16 states while the capital and largest city is Berlin. Germany covers an area of 357,021 km2 and has a largely temperate seasonal climate...
, by the American forces he joined the Polish Army in the West. The new communist authorities deprived him of Polish citizenship and Czuma chose to remain an emigre in the United Kingdom
United Kingdom
The United Kingdom of Great Britain and Northern IrelandIn the United Kingdom and Dependencies, other languages have been officially recognised as legitimate autochthonous languages under the European Charter for Regional or Minority Languages...
, where he died at Penley near Wrexham in 1962.

He received several of the highest military awards of the Allied countries, including: