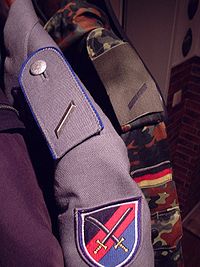 Waffenfarbe is a means the German military uses to distinguish between different corps or troop functions in its armed services. The waffenfarbe is the colour of the collar patch, of the piping
Piping (sewing)
In sewing, piping is a type of trim or embellishment consisting of a strip of folded fabric inserted into a seam to define the edges or style lines of a garment or other textile object. Usually the fabric strip is cut on the bias, and often it is folded over a cord...
(coloured edging) around the shoulder boards or shoulder straps and - for enlisted ranks - of the piping around the collar and the garrison cap
Garrison cap
A Side cap is a foldable military cap with straight sides and a creased or hollow crown sloping to the back where it is parted. It is known as a garrison cap , a wedge cap , or officially field service cap, , but it is more generally known as the side cap.It follows the style which...
(schiffchen). (In the latter places, NCO's wear cords of dark gold, officers silver, and generals gold.)

The German Army
German Army
The German Army is the land component of the armed forces of the Federal Republic of Germany. Following the disbanding of the Wehrmacht after World War II, it was re-established in 1955 as the Bundesheer, part of the newly formed West German Bundeswehr along with the Navy and the Air Force...
uses a waffenfarben scheme of colours to indicate troop types. The colours appear on the collar patch and as piping around the shoulder boards or straps showing a soldier’s rank.

Although soldiers’ berets are also coloured, the colours are slightly less differentiated than the waffenfarben, and corps or troop function is indicated by a beret badge rather than beret colour.

The German Air Force
Luftwaffe
Luftwaffe is a generic German term for an air force. It is also the official name for two of the four historic German air forces, the Wehrmacht air arm founded in 1935 and disbanded in 1946; and the current Bundeswehr air arm founded in 1956....
only uses a small spectrum of colours for the purpose. While the normal colour for the air force is a golden yellow, officers in the general staff service (today there is no general staff as such) wear wine-red and generals, bright red. Generals’ and general staff service officers' collar patches (Kragenspiegel) also differ from the normal air force design, being the same the army wears.

1935-45, the air force used a larger number of colours, including bi-coloured (see below).

The German Navy
German Navy
The German Navy is the navy of Germany and is part of the unified Bundeswehr .The German Navy traces its roots back to the Imperial Fleet of the revolutionary era of 1848 – 52 and more directly to the Prussian Navy, which later evolved into the Northern German Federal Navy...
does not use function-specific colours to distinguish between corps. This is done instead by various emblems above the rank stripes on the sleeves.


Some Waffenfarben used by the Reichsheer 1921-35

Some Waffenfarben used by the Wehrmacht Heer 1935-45


Some Waffenfarben used by the Luftwaffe 1935-45

East German (DDR) Nationale Volksarmee
National People's Army
The National People’s Army were the armed forces of the German Democratic Republic .The NVA was established in 1956 and disestablished in 1990. There were frequent reports of East German advisors with Communist African countries during the Cold War...
uniforms initially wore the waffenfarbe as worn by the Wehrmacht, i.e. as base and filling of the collar and sleeve patches and as a piping around the shoulder boards/shoulder straps. Between 1974 and 1979, along with the introduction of uniforms with open collar and tie, the patches of the ground force uniforms were unified with a dark grey base and a white filling, along with a white collar piping; the piping of the shoulder boards/shoulder straps remained the only part carrying a Waffenfarbe. However, air and air defence forces, paratroopers and generals as well as the navy continued to wear their specially designed and coloured patches.


Similarities in other armies

The use of colours to distinguish between troop functions was not unique to the German Army
German Army
The German Army is the land component of the armed forces of the Federal Republic of Germany. Following the disbanding of the Wehrmacht after World War II, it was re-established in 1955 as the Bundesheer, part of the newly formed West German Bundeswehr along with the Navy and the Air Force...
during the Second World War. The Soviet Army
Soviet Army
The Soviet Army is the name given to the main part of the Armed Forces of the Soviet Union between 1946 and 1992. Previously, it had been known as the Red Army. Informally, Армия referred to all the MOD armed forces, except, in some cases, the Soviet Navy.This article covers the Soviet Ground...
also used coloured shoulder boards
Epaulette
Epaulette is a type of ornamental shoulder piece or decoration used as insignia of rank by armed forces and other organizations.Epaulettes are fastened to the shoulder by a shoulder strap or "passant", a small strap parallel to the shoulder seam, and the button near the collar, or by laces on the...
after 1942 to distinguish troop functions: ground forces general officers and infantry used red, cavalry used blue, and artillery, tank troops and the rest of the ground forces used black, while the air force and airborne troops used sky blue. Likewise the British Army
British Army
The British Army is the land warfare branch of Her Majesty's Armed Forces in the United Kingdom. It came into being with the unification of the Kingdom of England and Scotland into the Kingdom of Great Britain in 1707. The new British Army incorporated Regiments that had already existed in England...
utilized coloured strips of cloth on the sleeves to likewise identify troop functions.