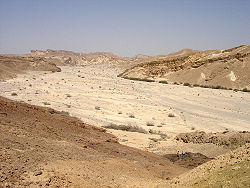 Wadi is the Arabic term traditionally referring to a valley
Valley
In geology, a valley or dale is a depression with predominant extent in one direction. A very deep river valley may be called a canyon or gorge.The terms U-shaped and V-shaped are descriptive terms of geography to characterize the form of valleys...
. In some cases, it may refer to a dry (ephemeral
Ephemeral
Ephemeral things are transitory, existing only briefly. Typically the term is used to describe objects found in nature, although it can describe a wide range of things....
) riverbed
Stream bed
A stream bed is the channel bottom of a stream, river or creek; the physical confine of the normal water flow. The lateral confines or channel margins, during all but flood stage, are known as the stream banks or river banks. In fact, a flood occurs when a stream overflows its banks and flows onto...
that contains water only during times of heavy rain
Rain
Rain is liquid precipitation, as opposed to non-liquid kinds of precipitation such as snow, hail and sleet. Rain requires the presence of a thick layer of the atmosphere to have temperatures above the melting point of water near and above the Earth's surface...
or simply an intermittent stream
Stream
A stream is a body of water with a current, confined within a bed and stream banks. Depending on its locale or certain characteristics, a stream may be referred to as a branch, brook, beck, burn, creek, "crick", gill , kill, lick, rill, river, syke, bayou, rivulet, streamage, wash, run or...
.

In North Africa
North Africa
North Africa or Northern Africa is the northernmost region of the African continent, linked by the Sahara to Sub-Saharan Africa. Geopolitically, the United Nations definition of Northern Africa includes eight countries or territories; Algeria, Egypt, Libya, Morocco, South Sudan, Sudan, Tunisia, and...
the transcription
Transcription (linguistics)
Transcription in the linguistic sense is the systematic representation of language in written form. The source can either be utterances or preexisting text in another writing system, although some linguists only consider the former as transcription.Transcription should not be confused with...
Oued, pronounced as Wad, is used. The term kouri is used in Hausa
Hausa language
Hausa is the Chadic language with the largest number of speakers, spoken as a first language by about 25 million people, and as a second language by about 18 million more, an approximate total of 43 million people...
speaking and surrounding areas of West Africa
West Africa
West Africa or Western Africa is the westernmost region of the African continent. Geopolitically, the UN definition of Western Africa includes the following 16 countries and an area of approximately 5 million square km:-Flags of West Africa:...
. The Hebrew
Hebrew language
Hebrew is a Semitic language of the Afroasiatic language family. Culturally, is it considered by Jews and other religious groups as the language of the Jewish people, though other Jewish languages had originated among diaspora Jews, and the Hebrew language is also used by non-Jewish groups, such...
term nahal (נחל) and Hindi/Urdu term "Nala" is synonymous in meaning and usage.

Some names of Spanish locations are derived from Andalusian Arabic toponyms where was used to mean a permanent river, for example: Guadalcanal, Guadalajara
Guadalajara, Spain
Guadalajara is a city and municipality in the autonomous community of Castile-La Mancha, Spain, and in the natural region of La Alcarria. It is the capital of the province of Guadalajara. It is located roughly 60 km northeast of Madrid on the Henares River, and has a population of 83,789...
from wādī al-hidjārah = "river of stones", or Guadalquivir
Guadalquivir
The Guadalquivir is the fifth longest river in the Iberian peninsula and the second longest river to be its whole length in Spain. The Guadalquivir is 657 kilometers long and drains an area of about 58,000 square kilometers...
from al-wādī al-kabīr = "the great river". Seasonal streams, frequent in south-east Spain, are called rambla instead.

The term is very widely found in Arabic
Arabic language
Arabic is a name applied to the descendants of the Classical Arabic language of the 6th century AD, used most prominently in the Quran, the Islamic Holy Book...
toponyms.

Wadis tend to be associated with centers of human population because sub-surface water is sometimes available in them. Nomadic and pastoral desert peoples will rely on seasonal vegetation found in wadis, even in regions as dry as the Sahara
Sahara
The Sahara is the world's second largest desert, after Antarctica. At over , it covers most of Northern Africa, making it almost as large as Europe or the United States. The Sahara stretches from the Red Sea, including parts of the Mediterranean coasts, to the outskirts of the Atlantic Ocean...
, as they travel in complex transhumance
Transhumance
Transhumance is the seasonal movement of people with their livestock between fixed summer and winter pastures. In montane regions it implies movement between higher pastures in summer and to lower valleys in winter. Herders have a permanent home, typically in valleys. Only the herds travel, with...
routes.

The centrality of wadis to water - and human life - in desert environments gave birth to the distinct sub-field of "Wadi Hydrology" in the 1990s.

Deposition in a wadi is rapid because of the sudden loss of stream velocity
Velocity
In physics, velocity is speed in a given direction. Speed describes only how fast an object is moving, whereas velocity gives both the speed and direction of the object's motion. To have a constant velocity, an object must have a constant speed and motion in a constant direction. Constant ...
and seepage of water into the porous sediment. Wadi deposits are thus usually poorly-sorted gravels and sands. These sediments are often reworked by eolian
Eolianite
Eolianite or aeolianite is any rock formed by the lithification of sediment deposited by aeolian processes; that is, the wind. In common use, however, the term refers specifically to the most common form of eolianite: coastal limestone consisting of carbonate sediment of shallow marine biogenic...
processes.

Over time, wadi deposits may become "Inverted Wadis" where the presence at one time of underground water caused vegetation and sediment to fill in the Wadi's eroded channel to the point that previous washes appear as ridges running through desert regions.

Job speaks of his friends whom he calls brothers as being like these wadis. The Jewish Study Bible transliterated the word "brook" in for the word "nachal" נחל, the Hebrew equivalent of the Arabic "wadi". The commentator notes, "Wadi, a seasonal stream that may be dangerously overflowing in winter and dry in summer". In his books of commentary, Albert Barnes notes: "The idea here is, that travelers in a caravan would approach the place where water had been found before, but would find the fountain dried up or the stream lost in the sand; and when they looked for refreshment, they found only disappointment".