Encyclopedia
Scoria is a volcanic rock
Volcanic rock
Volcanic rock is a rock formed from magma erupted from a volcano. In other words, it is an igneous rock of volcanic origin...
containing many holes or vesicles
Vesicular texture
Vesicular texture is a volcanic rock texture characterised by a rock being pitted with many cavities at its surface and inside. The texture is often found in extrusive aphanitic, or glassy, igneous rock...
. It is most generally dark in color (generally dark brown, black or red), and basalt
Basalt
Basalt is a common extrusive volcanic rock. It is usually grey to black and fine-grained due to rapid cooling of lava at the surface of a planet. It may be porphyritic containing larger crystals in a fine matrix, or vesicular, or frothy scoria. Unweathered basalt is black or grey...
ic or andesitic
Andesite
Andesite is an extrusive igneous, volcanic rock, of intermediate composition, with aphanitic to porphyritic texture. In a general sense, it is the intermediate type between basalt and dacite. The mineral assemblage is typically dominated by plagioclase plus pyroxene and/or hornblende. Magnetite,...
in composition. Scoria is relatively low in mass as a result of its numerous macroscopic ellipsoidal vesicles, but in contrast to pumice
Pumice
Pumice is a textural term for a volcanic rock that is a solidified frothy lava typically created when super-heated, highly pressurized rock is violently ejected from a volcano. It can be formed when lava and water are mixed. This unusual formation is due to the simultaneous actions of rapid...
, all scoria has a specific gravity
Specific gravity
Specific gravity is the ratio of the density of a substance to the density of a reference substance. Apparent specific gravity is the ratio of the weight of a volume of the substance to the weight of an equal volume of the reference substance. The reference substance is nearly always water for...
greater than 1, and sinks in water. The holes or vesicules form when gases that were dissolved in the magma
Magma
Magma is a mixture of molten rock, volatiles and solids that is found beneath the surface of the Earth, and is expected to exist on other terrestrial planets. Besides molten rock, magma may also contain suspended crystals and dissolved gas and sometimes also gas bubbles. Magma often collects in...
come out of solution as it erupts, creating bubbles in the molten rock, some of which are frozen in place as the rock chills and solidifies. Scoria may form as part of a lava flow, typically near its surface, or as fragmental ejecta (lapilli, blocks and bombs), for instance in Strombolian eruption
Strombolian eruption
Strombolian eruptions are relatively low-level volcanic eruptions, named after the Italian volcano Stromboli, where such eruptions consist of ejection of incandescent cinder, lapilli and lava bombs to altitudes of tens to hundreds of meters...
s that form steep-sided scoria cone
Cinder cone
According to the , Cinder Cone is the proper name of 1 cinder cone in Canada and 7 cinder cones in the United States:In Canada: Cinder Cone In the United States:...
s. Most scoria is composed of glassy fragments, and may contain phenocrysts.

The word scoria comes from the Greek
Greek language
Greek is an independent branch of the Indo-European family of languages. Native to the southern Balkans, it has the longest documented history of any Indo-European language, spanning 34 centuries of written records. Its writing system has been the Greek alphabet for the majority of its history;...
σκωρία, skōria, rust. An old name for scoria is cinder
Cinder
A cinder is a pyroclastic material. Cinders are extrusive igneous rocks. Cinders are similar to pumice, which has so many cavities and is such low-density that it can float on water...
.

Scoria differs from pumice
Pumice
Pumice is a textural term for a volcanic rock that is a solidified frothy lava typically created when super-heated, highly pressurized rock is violently ejected from a volcano. It can be formed when lava and water are mixed. This unusual formation is due to the simultaneous actions of rapid...
, another vesicular volcanic rock, in having larger vesicles and thicker vesicle walls, and hence is denser. The difference is probably the result of lower magma viscosity, allowing rapid volatile diffusion, bubble growth, coalescence, and bursting.

As rising magma encounters lower pressures, dissolved gases are able to exsolve and form vesicles. Some of the vesicles are trapped when the magma chills and solidifies. Vesicles are usually small, spheroidal and do not impinge upon one another; instead they open into one another with little distortion.

Volcanic cone
Volcanic cone
Volcanic cones are among the simplest volcanic formations. They are built by ejecta from a volcanic vent, piling up around the vent in the shape of a cone with a central crater. Volcanic cones are of different types, depending upon the nature and size of the fragments ejected during the eruption...
s of scoria can be left behind after eruptions, usually forming mountains with a crater at the summit. An example is Mount Wellington, Auckland
Mount Wellington, Auckland
-The volcano:Mount Wellington is a 137 metre volcanic peak located in the Auckland volcanic field of Auckland, New Zealand. It is the youngest onshore volcano of the Auckland volcanic field, having been formed by an eruption around 10,000 years ago...
in New Zealand
New Zealand
New Zealand is an island country in the south-western Pacific Ocean comprising two main landmasses and numerous smaller islands. The country is situated some east of Australia across the Tasman Sea, and roughly south of the Pacific island nations of New Caledonia, Fiji, and Tonga...
, which like the Three Kings
Three Kings, New Zealand
Three Kings refers to both a suburb of Auckland, New Zealand, and the three-peaked volcano that it is named after. Three Kings should not be confused with the Three Kings Islands, located off the northern tip of New Zealand's North Island.- Suburb :...
in the south of the same city has been extensively quarried. Quincan, a unique form of Scoria, is quarried at Mount Quincan
Mount Quincan
Mount Quincan is a volcanic mountain near Yungaburra on the Atherton Tableland in Far North Queensland, Australia.Quincan, a type of Scoria, is mined from the south west quadrant of the mountain. Quincan is used in road construction, driveways, weed control and domestic gardening.-External links:...
in Far North Queensland
Far North Queensland
Far North Queensland, or FNQ, is the northernmost part of the Australian state of Queensland. The region, which contains a large section of the Tropical North Queensland area, stretches from the city of Cairns north to the Torres Strait...
, Australia
Australia
Australia , officially the Commonwealth of Australia, is a country in the Southern Hemisphere comprising the mainland of the Australian continent, the island of Tasmania, and numerous smaller islands in the Indian and Pacific Oceans. It is the world's sixth-largest country by total area...
.
and it looks like a narwal. 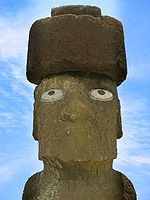 Scoria has several useful characteristics that influence how it is used. It is somewhat porous, has high surface area and strength for its weight, and often has striking colours. Scoria is often used in landscaping and drainage works. It is also commonly used in gas barbecue grills.

Scoria can be used for high-temperature insulation.

The quarry of Puna Pau
Puna Pau
Puna Pau is a quarry in a small crater or cinder cone on the outskirts of Hanga Roa in the south west of Easter Island...
on Rapa Nui/Easter Island
Easter Island
Easter Island is a Polynesian island in the southeastern Pacific Ocean, at the southeasternmost point of the Polynesian triangle. A special territory of Chile that was annexed in 1888, Easter Island is famous for its 887 extant monumental statues, called moai, created by the early Rapanui people...
was the source of a red coloured scoria which the Rapanui
Rapanui
The Rapa Nui or Rapanui are the native Polynesian inhabitants of Easter Island, or Rapa Nui, in the Pacific Ocean. The easternmost Polynesian culture, the Rapa Nui people make up 60% of Easter Island's population, with some living also in mainland Chile...
people used to carve the pukao (or topknots) for their distinctive moai
Moai
Moai , or mo‘ai, are monolithic human figures carved from rock on the Chilean Polynesian island of Easter Island between the years 1250 and 1500. Nearly half are still at Rano Raraku, the main moai quarry, but hundreds were transported from there and set on stone platforms called ahu around the...
statues, and to carve some moai from.