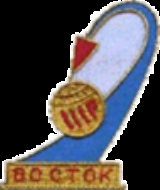 Encyclopedia
Vostok 2 was a Soviet
Soviet Union
The Soviet Union , officially the Union of Soviet Socialist Republics , was a constitutionally socialist state that existed in Eurasia between 1922 and 1991....
space mission which carried cosmonaut
Astronaut
An astronaut or cosmonaut is a person trained by a human spaceflight program to command, pilot, or serve as a crew member of a spacecraft....
Gherman Titov
Gherman Titov
Gherman Stepanovich Titov was a Soviet cosmonaut who, on August 6, 1961, became the second human to orbit the Earth aboard Vostok 2, preceded by Yuri Gagarin on Vostok 1...
into orbit for a full day in order to study the effects of a more prolonged period of weightlessness
Weightlessness
Weightlessness is the condition that exists for an object or person when they experience little or no acceleration except the acceleration that defines their inertial trajectory, or the trajectory of pure free-fall...
on the human body. Titov orbited the earth over 17 times, exceeding the single orbit of Yuri Gagarin
Yuri Gagarin
Yuri Alekseyevich Gagarin was a Soviet pilot and cosmonaut. He was the first human to journey into outer space, when his Vostok spacecraft completed an orbit of the Earth on April 12, 1961....
on Vostok 1
Vostok 1
Vostok 1 was the first spaceflight in the Vostok program and the first human spaceflight in history. The Vostok 3KA spacecraft was launched on April 12, 1961. The flight took Yuri Gagarin, a cosmonaut from the Soviet Union, into space. The flight marked the first time that a human entered outer...
− as well as the suborbital spaceflights of American astronauts Alan Shepard
Alan Shepard
Alan Bartlett Shepard, Jr. was an American naval aviator, test pilot, flag officer, and NASA astronaut who in 1961 became the second person, and the first American, in space. This Mercury flight was designed to enter space, but not to achieve orbit...
and Gus Grissom
Gus Grissom
Virgil Ivan Grissom , , better known as Gus Grissom, was one of the original NASA Project Mercury astronauts and a United States Air Force pilot...
aboard their respective Mercury-Redstone 3
Mercury-Redstone 3
Mercury-Redstone 3 was the first manned space mission of the United States. Astronaut Alan Shepard piloted a 15-minute Project Mercury suborbital flight in the Freedom 7 spacecraft on May 5, 1961 to become the first American in space, three weeks after the Soviet cosmonaut Yuri Gagarin had carried...
and 4
Mercury-Redstone 4
Mercury-Redstone 4 was the second United States manned space mission, launched on July 21, 1961. The Mercury program suborbital flight used a Redstone rocket. The spacecraft was named Liberty Bell 7 piloted by astronaut Virgil I. "Gus" Grissom. It reached an altitude of more than 118.26 mi ...
missions. Indeed, Titov's number of orbits and flight time would not be surpassed by an American astronaut until Gordon Cooper's
Gordon Cooper
Leroy Gordon Cooper, Jr. , also known as Gordon Cooper, was an American aeronautical engineer, test pilot and NASA astronaut. Cooper was one of the seven original astronauts in Project Mercury, the first manned space effort by the United States...
Mercury-Atlas 9
Mercury-Atlas 9
Mercury-Atlas 9 was the final manned space mission of the U.S. Mercury program, launched on May 15, 1963 from Launch Complex 14 at Cape Canaveral, Florida. The spacecraft, named Faith 7, completed 22 Earth orbits before splashing down in the Pacific Ocean, piloted by astronaut Gordon Cooper, then...
spaceflight.

The flight was an almost complete success, marred only by a heater that had inadvertently been turned off prior to liftoff and that allowed the inside temperature to drop to 50 °F (10 °C), a bout of space sickness, and a troublesome re-entry when the reentry module failed to separate cleanly from its service module
Service module
A service module is a spacecraft compartment containing a variety of support systems used for spacecraft operations. Usually located in the uninhabited area of the spacecraft, the service module is jettisoned upon the completion of the mission, and usually burns up during atmospheric reentry...
.

Unlike Yuri Gagarin on Vostok 1, Titov took manual control of the spacecraft for a short while. Another change came when the Soviets admitted that Titov did not land with his spacecraft. Titov would claim in an interview that he ejected from his capsule as a test of an alternative landing system; it is now known that all Vostok program landings were performed this way.

As of 2010, Titov remains the youngest person to reach space. He was a month short of 26 years old at launch.

Gherman Titov launched from Gagarin's Start
Gagarin's Start
Gagarin's Start is a launch site at Baikonur Cosmodrome in Kazakhstan, used for the Soviet space program and now managed by the Russian Federal Space Agency....
at Baikonur Cosmodrome
Baikonur Cosmodrome
The Baikonur Cosmodrome , also called Tyuratam, is the world's first and largest operational space launch facility. It is located in the desert steppe of Kazakhstan, about east of the Aral Sea, north of the Syr Darya river, near Tyuratam railway station, at 90 meters above sea level...
on 6 August 1961 at 0600 UTC aboard the Vostok 2 spacecraft. Radio personality Yuri Levitan
Yuri Levitan
Yuri Borisovich Levitan , was a Soviet radio announcer famous for his wartime reports of the battles, which usually began with "Attention, Moscow is speaking." His voice announced battlefield victories, air raid warnings, and the surrender of Germany to the Soviets on May 9, 1945...
interrupted Radio Moscow programming with an announcement of the flight at 0745 UTC.

Nausea
Nausea
Nausea , is a sensation of unease and discomfort in the upper stomach with an involuntary urge to vomit. It often, but not always, precedes vomiting...
set in as Titov escaped Earth's gravity, which caused him to vomit when he tried to eat one of his planned meals. Soviet space program officials suspected disturbance of Titov's vestibular system
Vestibular system
The vestibular system, which contributes to balance in most mammals and to the sense of spatial orientation, is the sensory system that provides the leading contribution about movement and sense of balance. Together with the cochlea, a part of the auditory system, it constitutes the labyrinth of...
was to blame, leading them to begin early investigations into what is now known as space adaptation syndrome
Space adaptation syndrome
Space adaptation syndrome or space sickness is a condition experienced by around half of space travelers during adaptation to weightlessness. It is related to motion sickness, as the vestibular system adapts to weightlessness.- Cause and remedy :...
, or space sickness. Titov is believed to be the first spacefarer to experience the condition.

Titov took manual control of the spacecraft's attitude
Attitude dynamics and control
Spacecraft flight dynamics is the science of space vehicle performance, stability, and control. It requires analysis of the six degrees of freedom of the vehicle's flight, which are similar to those of aircraft: translation in three dimensional axes; and its orientation about the vehicle's center...
for a time as he passed over Africa on his first orbit and would again at the end of the seventh orbit; the controls were reported to function well. Titov exchanged greetings with Soviet Premier Nikita Khrushchev
Nikita Khrushchev
Nikita Sergeyevich Khrushchev led the Soviet Union during part of the Cold War. He served as First Secretary of the Communist Party of the Soviet Union from 1953 to 1964, and as Chairman of the Council of Ministers, or Premier, from 1958 to 1964...
as he passed over the Soviet Union at the end of his first orbit, replicating Gagarin's feat.

A camera aboard the spacecraft transmitted smiling pictures of Titov to the ground as he passed over Soviet territory on the fifth orbit. Titov settled down to sleep during the seventh orbit; he awoke over eight hours later, 37 minutes after the scheduled end of his sleep period. Sleep did not relieve Titov's serious discomfort; he still felt very ill after awaking. After 12 orbits Titov suddenly began to recover, and became "completely functional and fully fit".

Detailed information about the radio frequencies used by the spacecraft were made public before Titov's flight; listening posts around the world picked up voice and telemetry signals from Vostok 2, allaying suspicions that the spaceflight might have been faked.

As on Vostok 1, the Vostok 2 service module failed to detach from the reentry module when commanded and reentry
Atmospheric reentry
Atmospheric entry is the movement of human-made or natural objects as they enter the atmosphere of a celestial body from outer space—in the case of Earth from an altitude above the Kármán Line,...
began with the former still attached; the conjoined modules gyrated violently until aerodynamic heating
Aerodynamic heating
Aerodynamic heating is the heating of a solid body produced by the passage of fluid over a body such as a meteor, missile, or airplane. It is a form of forced convection in that the flow field is created by forces beyond those associated with the thermal processes...
burned through the straps still holding them together. Titov ejected from the capsule as planned and parachuted separately to land at 0718 UTC on 7 August 1961, near Krasny Kut, Saratov Oblast.

The Vostok 2 landing site coordinates are 50.85276°N 47.02048°E, which is 11.5 km South of Krasny Kut, Saratovskaya oblast in the Russian Federation. At the roadside site are two monuments dedicated to the Vostok 2 mission. The larger one is a 9 meter tall, silver painted stone sculpture, that resembles a single birds wing pointed skyward. The center of the wing has a series of looping openings, one atop the next, that resemble a row of feathers. To the right of the wing sculpture is a 2 meter high, silver painted square stone block, with a rounded corner on the front side. A portrait of Titov, wearing a space helmet, is on one side of the stone block, the other side contains red painted text commemorating the mission.

In 1964, the Vostok 2 spacecraft was reused as a ballast weight in a test of an experimental parachute system planned for the Voskhod spacecraft. The protoype malfunctioned, shattering Vostok 2 into tiny pieces.
The source of this article is wikipedia, the free encyclopedia.  The text of this article is licensed under the GFDL.