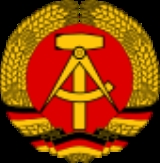 Encyclopedia
The People's Chamber was the unicameral legislature
Legislature
A legislature is a kind of deliberative assembly with the power to pass, amend, and repeal laws. The law created by a legislature is called legislation or statutory law. In addition to enacting laws, legislatures usually have exclusive authority to raise or lower taxes and adopt the budget and...
of the German Democratic Republic (East Germany). From its founding in 1949 until the first free elections on 18 March 1990, all members of the Volkskammer were elected on a slate controlled by the Socialist Unity Party of Germany
Socialist Unity Party of Germany
The Socialist Unity Party of Germany was the governing party of the German Democratic Republic from its formation on 7 October 1949 until the elections of March 1990. The SED was a communist political party with a Marxist-Leninist ideology...
(SED), called the National Front
National Front (East Germany)
The National Front of the German Democratic Republic was an alliance of political parties and mass organisations in East Germany...
. Despite the appearance of a multi-party system, all these Bloc parties were effectively controlled by the dominant SED. In addition, seats were also allocated to various mass organizations affiliated with the SED, such as the Free German Youth
Free German Youth
The Free German Youth, also known as the FDJ , was the official socialist youth movement of the German Democratic Republic and the Socialist Unity Party of Germany....
.

Initially, it existed alongside the Chamber of States
Länderkammer
The Länderkammer was one of the two legislative chambers of the German Democratic Republic from 1949, when the GDR was formed, until 1952, at which time it was largely sidelined, when the five Länder of the GDR were abolished and replaced with smaller administrative regions. The Länderkammer...
, or Länderkammer, but in 1952 the states of East Germany (and with it the chamber) were dissolved.

In theory, the Volkskammer was the highest organ of state power in the GDR. Both GDR constitutions vested it with great lawmaking powers. It also formally appointed the Council of State (after 1960), the Council of Ministers
Ministerrat
The Council of Ministers of the German Democratic Republic was the chief executive body of East Germany from November 1950 until the GDR was unified with the Federal Republic of Germany on 3 October 1990...
, and the National Defence Council.

In practice, like most other legislatures in Communist countries, the People's Chamber did little more than rubber-stamp decisions already made by the SED. All parties were expected to respect democratic centralism
Democratic centralism
Democratic centralism is the name given to the principles of internal organization used by Leninist political parties, and the term is sometimes used as a synonym for any Leninist policy inside a political party...
, and the most dissent in voting ever shown by the Volkskammer to the SED were fourteen nays and eight abstentions on the part of CDU representatives in a vote on liberalising abortion
Abortion
Abortion is defined as the termination of pregnancy by the removal or expulsion from the uterus of a fetus or embryo prior to viability. An abortion can occur spontaneously, in which case it is usually called a miscarriage, or it can be purposely induced...
law.

A typical slate was as follows:


In 1976, the Volkskammer moved into a specially-constructed building on Marx-Engels-Platz (now Schloßplatz
Schloßplatz
Schloßplatz is a common name for squares in many German-speaking countries. Cities which have a Schloßplatz include Berlin, Frankfurt am Main, Stuttgart and Dresden.-Overview:...
again), the Palast der Republik
Palast der Republik
The Palace of the Republic in Berlin was the seat of the parliament of the German Democratic Republic, the People's Chamber, and also served various cultural purposes...
(Palace of the Republic).

After the 1990 elections
East German general election, 1990
Legislative elections were held in the German Democratic Republic on 18 March 1990. It was the first—and as it turned out, only—free parliamentary election in East Germany, and the first truly free election held in that part of Germany since 1933...
, the disposition of the parties was as follows:

Chairmen of the People's Chamber

|October 7, 1949
|February 22, 1969
|LDPD
|-
|Gerald Götting
Gerald Götting
Gerald Götting is a former East German Christian Democratic politician.-Life:Götting was born in Nietleben, Province of Saxony, now part of Halle/Saale. During World War II, he served in the Reichsarbeitsdienst, an auxiliary support and supply organization, and later in the Wehrmacht...

Sabine-Bergmann-Pohl was also head of state of the German Democratic Republic, due to the State Council having been abolished.