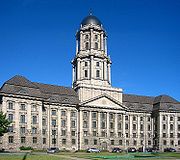 The Council of Ministers of the German Democratic Republic
German Democratic Republic
The German Democratic Republic , informally called East Germany by West Germany and other countries, was a socialist state established in 1949 in the Soviet zone of occupied Germany, including East Berlin of the Allied-occupied capital city...
(German: Ministerrat der Deutschen Demokratischen Republik) was the chief executive body of East Germany from November 1950 until the GDR was unified with the Federal Republic of Germany
West Germany
West Germany is the common English, but not official, name for the Federal Republic of Germany or FRG in the period between its creation in May 1949 to German reunification on 3 October 1990....
on 3 October 1990. Originally formed as a body of 18 members, by 1989 the council consisted of 44 members.

Under the Constitution of East Germany, the Council of Ministers was the official government of East Germany. In practice, the Council was ultimately answerable to the General Secretary of the Socialist Unity Party, and thus was not de facto
De facto
De facto is a Latin expression that means "concerning fact." In law, it often means "in practice but not necessarily ordained by law" or "in practice or actuality, but not officially established." It is commonly used in contrast to de jure when referring to matters of law, governance, or...
the highest power in the country.

The Council was led by a chairman (Vorsitzender), equivalent to a Prime Minister
Prime minister
A prime minister is the most senior minister of cabinet in the executive branch of government in a parliamentary system. In many systems, the prime minister selects and may dismiss other members of the cabinet, and allocates posts to members within the government. In most systems, the prime...
. There were two first deputy chairmen and nine other deputy chairmen. Together with some key ministers they formed the presidency (Präsidium) of the Council. The Präsidium prepared all decisions in consultation with the responsible departments of the Central Committee (Zentralkomitee) of the Socialist Unity Party of Germany
Socialist Unity Party of Germany
The Socialist Unity Party of Germany was the governing party of the German Democratic Republic from its formation on 7 October 1949 until the elections of March 1990. The SED was a communist political party with a Marxist-Leninist ideology...
(SED) and especially the Politbüro
Politburo
Politburo , literally "Political Bureau [of the Central Committee]," is the executive committee for a number of communist political parties.-Marxist-Leninist states:...
of the SED Central Committee. The Präsidium managed the day-to-day affairs of the Council between its weekly meetings, which took place regularly on Wednesdays to execute the resolutions of the Politbüro’s weekly meetings (on Tuesdays). The secretaries and department managers in the Central Committee were authorized to give instructions to the ministers as necessary.

Until the Wende in the fall of 1989, the two first deputy chairmen were Werner Krolikowski and Alfred Neumann
Alfred Neumann
Alfred Neumann may refer to:*Alfred Neumann , politician*Alfred Neumann *Alfred R. Neumann, first president of the University of Houston–Clear Lake*Alfred Neumann See also:...
, who were both members of the SED Politbüro. Other deputy chairmen included the leaders of the four allied parties (Blockparteien). Additional members included the chairman of the State Planning Commission, the president of the Staatsbank der DDR (State Bank of the GDR) and some state secretaries, who were usually office directors at the Council. All members of the Council were selected by the GDR Volkskammer
Volkskammer
The People's Chamber was the unicameral legislature of the German Democratic Republic . From its founding in 1949 until the first free elections on 18 March 1990, all members of the Volkskammer were elected on a slate controlled by the Socialist Unity Party of Germany , called the National Front...
(parliament) for a term of five years. Within the centralized state structure of the GDR, the city, county and district administrations were subordinated to the Council.

After the SED abandoned power in November 1989, the last Communist prime minister, Hans Modrow
Hans Modrow
Hans Modrow is a German politician, best known as the last communist premier of East Germany. He currently is the honorary Chairman of the Left Party....
, became in name as well as in fact the leader of East Germany. He was succeeded by Lothar de Maizière
Lothar de Maizière
Lothar de Maizière is a German christian democratic politician. In 1990, he served as the only democratically elected Prime Minister of the German Democratic Republic, and as such was the last leader of an independent East Germany....
after what turned out to be the only free election
East German general election, 1990
Legislative elections were held in the German Democratic Republic on 18 March 1990. It was the first—and as it turned out, only—free parliamentary election in East Germany, and the first truly free election held in that part of Germany since 1933...
ever held in East Germany, in March 1990. De Maizière presided over the transition period to the reunification of the two Germanies in October 1990.

The former Prussian state parliament (Preußischer Landtag) served as the seat of the Council from 1950 to 1953. From 1961 to 1990 the Council's offices were located in the former Berlin city hall at No. 47 Klosterstraße. The Law Gazette of the GDR (Gesetzblatt der DDR) was also published by the Council. In addition, the Council’s Press Office made official government announcements and was responsible for the accreditation of foreign journalists in the GDR.

The individual ministries had their own headquarters buildings in East Berlin, although the former Reich Air Ministry
Reich Air Ministry
thumb|300px|The Ministry of Aviation, December 1938The Ministry of Aviation was a government department during the period of Nazi Germany...
building on Leipziger Straße housed the industrially-oriented ministries.


Chairmen of the Council of Ministers

Ministries of the industries (1961-1965 in the course New Economic System were summarized the Ministries in national economy advice under his chairman Alfred Neumann):

* Renamed in 1990 as the Ministry for Disarmament and Defense.

*** Renamed in 1989 as the Ministry for Education and Youth.