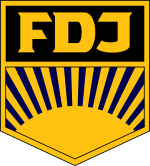 The FDJ was intended to be the "reliable assistant and fighting reserve of the Worker's Party", or Socialist Unity Party of Germany, was a member of the National Front
National Front (East Germany)
The National Front of the German Democratic Republic was an alliance of political parties and mass organisations in East Germany...
and had representatives in the People's Chamber
Volkskammer
The People's Chamber was the unicameral legislature of the German Democratic Republic . From its founding in 1949 until the first free elections on 18 March 1990, all members of the Volkskammer were elected on a slate controlled by the Socialist Unity Party of Germany , called the National Front...
. The political and ideological goal of the FDJ was to influence every aspect of life of young people in the GDR, distribution of Marxism-Leninism
Marxism-Leninism
Marxism–Leninism is a communist ideology, officially based upon the theories of Marxism and Vladimir Lenin, that promotes the development and creation of a international communist society through the leadership of a vanguard party over a revolutionary socialist state that represents a dictatorship...
and the indoctrination of socialist behavior. Membership in the FDJ was nominally voluntary but those who did not join lost access to organized holidays, and found it more difficult to be admitted to universities, pursue chosen careers etc. The majority of youths who refused to join did so for religious reasons.

While the movement was intended to indoctrinate East Germany's young people in Marxism-Leninism
Marxism-Leninism
Marxism–Leninism is a communist ideology, officially based upon the theories of Marxism and Vladimir Lenin, that promotes the development and creation of a international communist society through the leadership of a vanguard party over a revolutionary socialist state that represents a dictatorship...
, it did not concentrate on this to the exclusion of other activities. It arranged thousands of holidays for young people through its Jugendtourist agency, and ran discos and open-air rock concerts. The Festival of Political Songs
Festival of Political Songs
The Festival of Political Songs was one of the largest music events in East Germany. It was founded by the group Oktoberklub and between 1970 and 1990 took place in East Berlin every February as an official event of the Free German Youth...
was an officially sponsored event from 1970 to 1990.

In 1936 the organization was founded as an underground anti-fascist, communist movement to oppose Hitler and the Nazi Party's rule. However, the Gestapo
Gestapo
The Gestapo was the official secret police of Nazi Germany. Beginning on 20 April 1934, it was under the administration of the SS leader Heinrich Himmler in his position as Chief of German Police...
of the Third Reich effectively prevented pro-communist groups such as the FDJ from operating within the country and the group was subsequently pushed out of Nazi Germany
Nazi Germany
Nazi Germany , also known as the Third Reich , but officially called German Reich from 1933 to 1943 and Greater German Reich from 26 June 1943 onward, is the name commonly used to refer to the state of Germany from 1933 to 1945, when it was a totalitarian dictatorship ruled by...
. During the same year, the organization moved its headquarters to Paris, to Prague in 1938 and later to London.

After the defeat of Hitler and the Nazi Party, the FDJ headquarters moved to the Soviet occupation zone of Germany. The organization once again became active in German politics in 1946.

When Germany was partitioned into the eastern German Democratic Republic and the western Federal Republic of Germany
West Germany
West Germany is the common English, but not official, name for the Federal Republic of Germany or FRG in the period between its creation in May 1949 to German reunification on 3 October 1990....
, supported by the Soviet Union
Soviet Union
The Soviet Union , officially the Union of Soviet Socialist Republics , was a constitutionally socialist state that existed in Eurasia between 1922 and 1991....
and the United States
United States
The United States of America is a federal constitutional republic comprising fifty states and a federal district...
respectively, the FDJ assumed a role in the GDR which resembled that of the Soviet Komsomol
Komsomol
The Communist Union of Youth , usually known as Komsomol , was the youth division of the Communist Party of the Soviet Union. The Komsomol in its earliest form was established in urban centers in 1918. During the early years, it was a Russian organization, known as the Russian Communist Union of...
. It was recognized as part of the World Federation of Democratic Youth
World Federation of Democratic Youth
The World Federation of Democratic Youth is a progressive youth organization, recognized by the United Nations as an international youth non-governmental organization. WFDY describes itself as an "anti-imperialist, left-wing" organisation...
at its annual meeting in Otwock
Otwock
Otwock is a town in central Poland, some southeast of Warsaw, with 42,765 inhabitants . It is situated on the right bank of Vistula River below the mouth of Swider River. Otwock is home to a unique architectural style called Swidermajer....
, Poland
Poland
Poland , officially the Republic of Poland , is a country in Central Europe bordered by Germany to the west; the Czech Republic and Slovakia to the south; Ukraine, Belarus and Lithuania to the east; and the Baltic Sea and Kaliningrad Oblast, a Russian exclave, to the north...
, on August 21, 1948.

The West German
West Germany
West Germany is the common English, but not official, name for the Federal Republic of Germany or FRG in the period between its creation in May 1949 to German reunification on 3 October 1990....
government treated the FDJ with suspicion because of its pro-communist orientation and of its links to East Germany. In 1951 the government of Konrad Adenauer
Konrad Adenauer
Konrad Hermann Joseph Adenauer was a German statesman. He was the chancellor of the West Germany from 1949 to 1963. He is widely recognised as a person who led his country from the ruins of World War II to a powerful and prosperous nation that had forged close relations with old enemies France,...
banned the FDJ along with the Communist Party of Germany
Communist Party of Germany
The Communist Party of Germany was a major political party in Germany between 1918 and 1933, and a minor party in West Germany in the postwar period until it was banned in 1956...
(KPD).

In May 1952, Phillip Müller, a member of the FDJ, was shot by the Volkspolizei
Volkspolizei
The Volkspolizei , or VP, were the national police of the German Democratic Republic . The Volkspolizei were responsible for most law enforcement in East Germany, but its organisation and structure were such that it could be considered a paramilitary force as well...
during a demonstration.

The FDJ's official newspaper, Junge Welt
Junge Welt
junge Welt is a German daily newspaper published in Berlin. The jW describes itself as a left and Marxist newspaperIt was first published on 12 February 1947 in the Soviet Sector of Berlin. junge Welt became the official newspaper of the Central Council of the Free German Youth on 12 November 1947...
, at one time was the largest-circulation paper in East Germany. It continues publication on a smaller scale without FDJ affiliation.

Members of the FDJ took part in the gala celebrations of East Germany's 40th anniversary on 7 October 1989. However, at a torchlight parade to cap off the festivities, many began chanting, "Gorby
Mikhail Gorbachev
Mikhail Sergeyevich Gorbachev is a former Soviet statesman, having served as General Secretary of the Communist Party of the Soviet Union from 1985 until 1991, and as the last head of state of the USSR, having served from 1988 until its dissolution in 1991...
, help us! Gorby, save us!" within earshot of all the Communist dignitaries gathered to watch. This came as a rude shock to the SED establishment, since the FDJ was supposed to be the party's future.

Between 1989 and the reunification of Germany
German reunification
German reunification was the process in 1990 in which the German Democratic Republic joined the Federal Republic of Germany , and when Berlin reunited into a single city, as provided by its then Grundgesetz constitution Article 23. The start of this process is commonly referred by Germans as die...
in 1990, the organization lost much of its membership. it shares the Karl-Liebknecht-Haus in Berlin
Berlin
Berlin is the capital city of Germany and is one of the 16 states of Germany. With a population of 3.45 million people, Berlin is Germany's largest city. It is the second most populous city proper and the seventh most populous urban area in the European Union...
with the Left Party
Left Party (Germany)
The Party of Democratic Socialism was a democratic socialist political party active in Germany from 1989 to 2007. It was the legal successor to the Socialist Unity Party , which ruled the German Democratic Republic until 1990. From 1990 through to 2005, the PDS had been seen as the left-wing...
and with other organizations, but is in no way affiliated with the party or any other major political group. Only in West Germany the FDJ works together with the Workers' League for the Restoration of the Communist Party of Germany. Legally, the statutes declaring the FDJ an illegal organization continue in effect, although the organization operates openly: it claims to have legal status, based on an agreement in 1990 between the two Germanies prior to reunification.

In 2007, the organization was reported to be canvassing for new members. The German domestic intelligence agency - the Federal Office for the Protection of the Constitution - which tracks "extremist" behavior, holds the FDJ's activities and movements under observation.