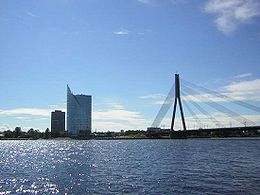 There are three hydroelectric
Hydroelectricity
Hydroelectricity is the term referring to electricity generated by hydropower; the production of electrical power through the use of the gravitational force of falling or flowing water. It is the most widely used form of renewable energy...
dam
Dam
A dam is a barrier that impounds water or underground streams. Dams generally serve the primary purpose of retaining water, while other structures such as floodgates or levees are used to manage or prevent water flow into specific land regions. Hydropower and pumped-storage hydroelectricity are...
s on the Daugava River – Rīgas HES
Rigas HES
Riga's Hydroelectric Power Plant is located just beyond Riga's southern border. It is geographically located in the town of Salaspils. Total installed power generating capacity is 402 MW. There are six generators, two transformers and two 330 kV power lines .-History:The Riga...
just upstream from Riga
Riga
Riga is the capital and largest city of Latvia. With 702,891 inhabitants Riga is the largest city of the Baltic states, one of the largest cities in Northern Europe and home to more than one third of Latvia's population. The city is an important seaport and a major industrial, commercial,...
or 35 km from the mouth of the river, Ķegums HPP
Kegums Hydro Power Plant
The Ķegums Hydro Power Plant is the oldest hydropower plant on the river Daugava and the third largest in Latvia located in Ķegums. The complex consist of two power plants. The first plant was built from 1936 to 1940...
another 35 km further up or 70 km from the mouth, and Pļaviņas HPP
Plavinas Hydro Power Plant
The Pļaviņas Hydro Power Plant is the biggest power plant in Latvia and one of the biggest hydroelectric power plants in the European Union. It is located in Aizkraukle on the river Daugava. It has ten individual turbines with installed total capacity of 868.5 MW.The construction aroused an...
another 37 km upstream or 107 km from the mouth. A fourth one, Daugavpils HES
Daugava 1 Hydro Power Plant
The Daugavpils hydroelectric power station was a proposed hydro power project in Daugavpils, Latvia. It was to have 10 individual turbines with a nominal output of around 30 MW which will deliver up to 300 MW of power....
, has been planned but has faced strong criticism. Belarus
Belarus
Belarus , officially the Republic of Belarus, is a landlocked country in Eastern Europe, bordered clockwise by Russia to the northeast, Ukraine to the south, Poland to the west, and Lithuania and Latvia to the northwest. Its capital is Minsk; other major cities include Brest, Grodno , Gomel ,...
currently plans to build several hydroelectric dams on the Belarusian part of Western Dvina.

The Latvian name for the river, "Daugava" originated from the ancient Baltic words for "the great water" (daudz ūdens). The names for the Daugava in other languages; Dyna – Двина – Дзьвіна – Dźwina -Düna – Dvina; originated from the Finno-Ugric
Finno-Ugric languages
Finno-Ugric , Finno-Ugrian or Fenno-Ugric is a traditional group of languages in the Uralic language family that comprises the Finno-Permic and Ugric language families....
name Vīna-Väinä, for passage-to-the-sea. This name is mentioned in the Viking sagas and the Chronicle of Nestor.

Ruba
Ruba
Ruba is an urban settlement in the Vitebsk Oblast of Belarus. It is subordinated to the ispolkom of Zheleznodorozhny District of Vitebsk....
, Vitsebsk, Beshankovichy, Polatsk
Polatsk
Polotsk , is a historical city in Belarus, situated on the Dvina river. It is the center of Polotsk district in Vitsebsk Voblast. Its population is more than 80,000 people...
with Boris stones
Boris stones
Boris Stones , also called Dvina Stones , are seven medieval artifacts erected along the bank of the Western Dvina between Polotsk and Drissa, Belarus. They probably predate Christianity in the area, but were inscribed in the 12th century with text and an image of Christ...
strewn in the vicinity, Navapolatsk
Navapolatsk
Navapolatsk is a city in Vitsebsk Province, Belarus, with a population of 107,458. Founded in 1958, it is located close to the city of Polatsk and the name literally means "New Polatsk".- History :...
, Dzisna
Dzisna
Dzisna , is a town in the Vitsebsk Voblast of Belarus. It's located on the left bank of the Daugava River, near the confluence of Dysna. It has 2,700 inhabitants . The towns population has declined over the years; early in the 20th century it had close to 10,000 inhabitants....
, Verkhnedvinsk
Verkhnedvinsk
Verkhnyadzvinsk or Verkhnedvinsk is a city in Belarus in the northwest of Vitsebsk Region; it is the administrative center of the Verkhnyadzvinsk raion. Until 1962, it was named Drysa...
, and Druya
Druya
Druya is a historic townlet in Vitebsk Oblast, Belarus, about 30 km northeast of Braslaw, located on the left bank of the Daugava River, at the mouth of the Drujka River, opposite the Latvian parish of Piedruja...
.

Krāslava
Kraslava
Krāslava is a major town in Krāslava municipality, in the Latgalia region of eastern Latvia.-History:* Krāslava was an important hillfort on the waterway from Variags to Greeks since early Middle Ages, part of the orthodox Principality of Jersika in 13th century.* In 1558 was mentioned for the...
, Daugavpils
Daugavpils
Daugavpils is a city in southeastern Latvia, located on the banks of the Daugava River, from which the city gets its name. Daugavpils literally means "Daugava Castle". With a population of over 100,000, it is the second largest city in the country after the capital Riga, which is located some...
, Līvāni
Livani
Līvāni is a town in central Latvia. It is situated at the junction of the Dubna and Daugava rivers, approximately 170 kilometers east of Riga, the capital....
, Jēkabpils
Jekabpils
Jēkabpils is a city in Selonia, Latvia roughly halfway between Riga and Daugavpils. The Daugava River runs through the town, and the ancient valley, branches, and islands of the river are considered picturesque...
, Pļaviņas
Plavinas
Pļaviņas is a town in Latvia. The town is located on the Daugava river.-See also:*List of cities in Latvia*Pļaviņas municipality...
, Aizkraukle
Aizkraukle
Aizkraukle is a town in Vidzeme region in Latvia, the administrative centre of Aizkraukle municipality on the right bank of the Daugava River.-History:Aizkraukle before the World War I was formerly known by its German name of Ascheraden...
, Jaunjelgava
Jaunjelgava
-See also:*List of cities in Latvia...
, Lielvārde
Lielvarde
Lielvārde , population 6328, is a town in Vidzeme, Latvia, the administrative centre of Lielvārde municipality on the right bank of the Daugava river, 52 km southeast of Riga.-History:...
, Kegums
Kegums
-Sport:Ķegums has been host to the Latvian Sidecarcross Grand Prix numerous times and will be hosting it again in 2010, on 8 August.In the 2009, Ķegums also hosted the Latvian Motocross Grand Prix.-See also:*List of cities in Latvia...
, Ogre
Ogre, Latvia
Ogre is the principal town of Ogre District in Central Latvia, 36 km east of the capital Riga, situated at the confluence of the Daugava and Ogre rivers...
, Ikšķile
Ikškile
Ikšķile is a town in Latvia, the administrative centre of Ikšķile municipality. It was the first capital of the catholic bishopric of Livonia, known by the German name of Üxküll. Saint Meinhard, known from the Chronicle of Henry of Livonia, was the first bishop of Üxküll. In 1197 Berthold of...
, Salaspils
Salaspils
Salaspils is a town in Latvia, the administrative centre of Salaspils municipality. The town is situated on the northern bank of the Daugava River 18 kilometers to the south-east of the city of Riga.-History:...
and Riga
Riga
Riga is the capital and largest city of Latvia. With 702,891 inhabitants Riga is the largest city of the Baltic states, one of the largest cities in Northern Europe and home to more than one third of Latvia's population. The city is an important seaport and a major industrial, commercial,...
.